The Würzburg soccer club ( WFV for short ) is a soccer club from the Lower Franconian district capital Würzburg , which was founded in 1981 - after the previous club 1. Würzburger FV 04 went bankrupt . Before the insolvency, the (predecessor) club last attracted national attention at the end of the 1970s when it was promoted to the 2nd Bundesliga. With the re-establishment, a new structure began in the lowest division. Since the 2012/13 season, Würzburger FV has been playing in the northern season of the fifth-rate Bayernliga . 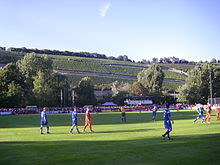 The Sepp-Endres sports complex (in the background the Würzburger Stein ).

In 1904 the predecessor club of the Würzburger FV was founded as 1. Würzburger FV 04 (also known as FV 04 Würzburg ). The greatest successes before the Second World War were the promotion to the first-class Bavarian regional league in 1927 , through which the club succeeded in joining local rivals Würzburger Kickers , as well as founding membership in the Gauliga Bayern introduced by the National Socialists . From this, the relegation followed after a year, during the war the club experienced promotion to the Bavarian upper house two more times.

After the war, midfield places often followed in the Bavarian Amateur League . FV 04 Würzburg experienced a renewed upswing in 1976 when it was promoted to the 2nd Bundesliga and local rivals Würzburger Kickers did the same in the following year. In 1980 there was relegation from the 2nd Bundesliga and in May 1981 the club finally went bankrupt. The old venue on Frankfurter Strasse was taken over by the DJK Würzburg , and the club register was deleted a few years later.

As a result of the insolvency of the 1st WFV 04, the Würzburger FV was founded in 1981 as the successor association. The team initially started playing in the lowest amateur area (C-class).

Until 2005, the "new" Würzburger FV fought their way into the Bavarian League (the fifth highest division from the introduction of the third division in 2008/09), from which, however, in the 2008/09 season - together with the Würzburger Kickers - he was relegated. In the 2010/11 season, they were promoted back to what was then the highest Bavarian league.

In the following year 2011/12, the club set itself the goal of qualifying for the newly introduced Bavarian Regional League . After a twelfth place in the table, the direct promotion was missed and a relegation participation over two rounds was necessary. In the second relegation round against SV Heimstetten , the WFV won the second leg on their own place 2-1, but missed qualification for the fourth division after a 0-1 defeat in the first leg due to the away goals rule. Since 2012/13, the WFV has been playing in the fifth-class North Season of the now two-tier Bayern League and is thus for the first time since 1998 in the league hierarchy behind city rivals Würzburger Kickers.

In the fall of 2014, the association's considerable financial problems became known, which, like its predecessor association in 1981, brought the WFV almost to the brink of bankruptcy. 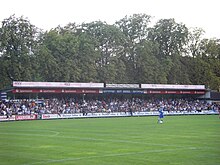 The Sepp-Endres sports facility on Mainaustraße used by the WFV is, like the stadium of its predecessor club, on Frankfurter Straße, in Zellerau, a residential area west of the city center. It was taken over by the DJK Würzburg as part of the re-establishment, while the latter moved to the premises on Frankfurter Strasse. The new homestead initially only had a Rotgrand square and was expanded by the WFV in 1985 to include a grass pitch. Since the area only has a grandstand on one side, which extends between the playing field and Mainaustrasse, it is not a stadium in the strict sense of the word, and the facility has no seats.

Successes of the Würzburger FV

Games in the main round of the DFB Cup:

Clubs of the Bavarian Football League in the 2019–21 season