This article is about the Bundeswehr general and peace researcher Wolf Graf Baudissin. For other bearers of this name see Wolf Baudissin . 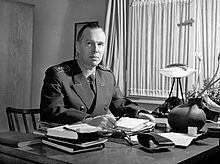 Count Baudissin was the son of the Prussian government president in Trier, Theodor von Baudissin and his wife Elis born. from Borcke . After his father was transferred to the Marienwerder administrative district in 1920 , he attended the Marienwerder grammar school from Obertertia to high school . In 1925/26 he studied law , history and economics for two semesters at the Friedrich-Wilhelms-Universität zu Berlin . He then joined the highly noble Infantry Regiment 9 ("Graf Neun") of the Reichswehr in Potsdam as a flag junior . However, he returned to civilian life in 1927 to complete an agricultural training. After graduating from the Technical University of Munich , he returned to active service in 1930 and, after further military training, was promoted to lieutenant in 1933 . In 1935 he became a regimental adjutant in the 9th Infantry Regiment and from 1938 attended training as a general staff officer at the Wehrmacht Academy in Berlin. Promoted to captain in 1939 , he was transferred to the general staff of the Africa Corps in 1941 at Erwin Rommel's request . After a short time he came in 1941 in British-Australian prisoner of war , which he held until 1947 in a POW camp Durringhile, Victoria , spent. During this time he was promoted to major in absentia . In the camp he had the idea of ​​the so-called "POW University". There, the knowledgeable German prisoners of war taught their comrades in subjects such as strategy , but also prepared them for a life after the war.

On his return to Germany, Baudissin was soon called in to the group of military experts in the Adenauer I cabinet who wrote the secret Himmeroder memorandum in October 1950 . Baudissin was the second youngest in the circle of mostly much higher-ranking former officers. He dealt particularly with the internal structure of future armed forces and, along with Johann Adolf Graf von Kielmansegg and Ulrich de Maizière, became one of the intellectual fathers of the reform conception of the Innereführung .

He joined the Blank office in 1951 as head of department and in 1955 became a sub-department head in the Ministry of Defense . In 1956 he was transferred to the Bundeswehr as a colonel , and from 1958 to 1961 Baudissin commanded a combat group , which later became the 4th Panzer Grenadier Brigade . 1961 he was appointed as Head of Operations and Intelligence into NATO - Headquarters of Fontainebleau added. From 1963 to 1965 he was in command of the NATO Defense College in Paris and then as Lieutenant General Deputy Chief of Staff for Planning and Operations at the NATO High Command Europe (SHAPE) in Paris and later in Casteau (Belgium).

While he was still active, Baudissin joined the Public Services, Transport and Traffic Union in 1966 . When he reached the age limit, he retired in 1967 and was active in science and politics. Joined the Social Democratic Party of Germany in 1968 , Baudissin publicly supported Willy Brandt's election campaign in 1972 . In January 1981, Baudissin gave an interview to the political scientist Gerhard Kade from Darmstadt on questions of NATO strategy, which was published in the same year in an anthology edited by Kade under the title Generals für den Frieden . At the time, Baudissin could not have known that Kade was an unofficial employee (IM) of the State Security of the GDR , but shortly after the publication of the tape he accused Kade in a letter (May 22, 1981, documented in the Baudissin Documentation Center of the Bundeswehr Leadership Academy in Hamburg) that he had abused him for his agitation against the NATO double resolution and broke off contact with him by stating that Kade lacked respect for those who think differently. Baudissin was never a member of the Generals for Peace group , which was organized by Kade after the book was published and financed by East Berlin , but his participation in the interview tape earned him this slander. In fact, in the debates about retrofitting, Baudissin was one of the most consistent advocates of the NATO double resolution, as was not least his contribution to the volume Passion for Practical Reason. Helmut Schmidt attests to the seventieth . He even saw himself as a co-author of the double resolution (letter to Major Helmuth Prieß from August 1983, documented in the BDZ).

From 1971 to 1984 he was the founding director of the Institute for Peace Research and Security Policy at the University of Hamburg , where he was appointed professor in 1979 . 1980 to 1986 he was also a lecturer for foreign and security policy at what is now the Helmut Schmidt University / University of the Federal Armed Forces in Hamburg . He was also a member of the military and social sciences working group . 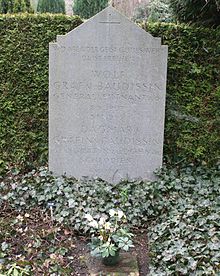 Baudissin was married to the sculptor Dagmar Burggräfin and Countess zu Dohna-Schlodien (1907–1995). She was the daughter of the lawyer and politician Alexander Graf zu Dohna-Schlodien and his wife Elisabeth, née von Pommer Esche .

The Baudissins are buried in the Groß Flottbek cemetery in Hamburg.