Civil aviation in China describes flight operations in the country before 1949. Landing sites often had to be built by the airlines themselves. The major cities in the Yangtze Valley were often approached by seaplanes. Before 1937 there were three airlines with a total route network of around 14,000 km in 1937. Despite their high prices, they were hardly profitable. The control and licensing was carried out by a directorate in the Ministry of Railways, which was closely connected with the KMT Ministry of Communications ("Ministry of Communications"). The transport of freight and mail always had priority. A lack of meteorological stations and the numerous dangerous military zones made flight operations unsafe. Before 1938, the flying personnel consisted exclusively of foreigners. 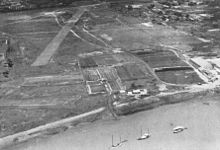 The first Shanghai airport in Long-hwa (now Xúhuì qū ) was built and operated by the China National Aviation Corporation (around 1931). 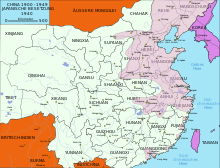 The disputes from 1937 onwards restricted Chinese flight operations to areas not under Japanese administration.

A first attempt to establish civil aviation in the state began in 1919 with the order for six passenger aircraft from Handley Page Aircraft Company . This was soon followed by orders for 65 machines from Avro and from Vickers-Vimy for forty passenger and forty training machines each. If these aircraft reached China at all, they were used by the warlords for military purposes; civil aviation was not established. Bills over ₤ 3½ million remained unpaid.

Only between Beijing and Peitaiho (near Tientsin ) or Tsinan could a passenger and air mail service be set up in 1924-6. After the KMT regime was able to temporarily take control of a substantial part of the country's cities north of the Yangtze after the massacres of the northern campaign , a civilian state air service began to be set up. Initially, it was planned to operate the Shanghai - Chengdu route. This line, operated by the Ministry of Transport, as a Chinese Air Company , never extended beyond Nanking .

State-sponsored pilot schools, also for military pilots, existed in Canton, founded in 1914 by Lym Fukyen (林福 元; = Lin Fu-yuan), in Nanyuan, and in the 1930s in Hangzhou . The first Chinese aircraft was built in 1928 under the direction of the director at Shanghai Airport . The first civil pilot training facility was set up there in 1935.

The American-owned company Curtiss-Wright located China Air, the (part of today the following reaches of the Yangtze between Shanghai and Hangkow Wuhan ) flew behalf of the state. After several accidents and arguments with the KMT government, the shares were sold to Pan Am . Sun K'e (孫 科) became the first president of the new China National Aviation Corporation (中國 航空公司; CNAC) in late 1929 . Flight and mail operations were officially started on October 26, 1929 with a Loening Air Yacht . With a share capital of ch. $ 10 million, the KMT regime held 55% of the shares, PanAm the rest. After the reorganization, which became necessary after the Supreme Court in 1930, disputes over jurisdiction between the Ministry of Transport and Railroad were brought about In June 1931 Wang Hsi-chang (王 銹 昌) had decided in favor of the former. The chief executive officer in 1934 was Huang Kiang-chuan, and technical director Dai Enki. The flight operations were subsidized with just under ch $ 0.30 per mile. After the China Incident began, the national government lost control of most of the seaports after August 1937. The company's headquarters were relocated to the international branch in Shanghai . Due to the war, the administration was outsourced to India until 1946. During this period, the transportation of weapons and ammunition became important.

Most of the staff at the headquarters, which had been back in Shanghai since 1946, declared their loyalty to the government of liberated China on November 9, 1949 . Twelve of the company's machines located in Hong Kong were then transferred. Some of the machines in Hong Kong were hijacked by the CIA cover organization Civil Air Transport and handed over to the KMT regime.

The entire flight operations were taken over by the newly founded CAAC , which, after it was no longer under the control of the military commission after 1954, was able to expand civil air traffic.

In the summer of 1935, a network of around 4900 km was served. A planned route from Chengtu via Kangting to Lhasa was never opened.

After relocating the KMT seat of government to Chungking , this location was used as an international hub to fly to Hanoi (until summer 1940), Hong Kong via Kweilin , Rangoon via Lashio and, in the remaining KMT sphere of influence, to Chengtu and with seaplanes to Kiating .

Strictly speaking, these companies would have to be described as semi-public since government agencies were involved in the capital.

The Eurasia Aviation (歐亞航空公司) was a German-Chinese joint venture headquartered in Jinkee Rd. 97, Shanghai. It emerged from the efforts of Luft Hansa to carry out a regular airmail service via the Soviet Union, which was initially carried out by the Deruluft company . The authorized signatory Wilhelm Schmidt had been negotiating in Shanghai since 1927.

The company, capitalized with ch $ 3 million, was officially founded on February 1, 1931. The Chinese Ministry of Transport held two thirds of the shares. From June 1937, Hong Kong was an important base for international connections. Wei Yi-fu became the general director, and the wealthy Shanghai businessman Tong Pao-shu (* 1891), who studied in Berlin, worked there at the German-Asian Bank and returned to China in 1921 , was appointed as a further director . From February 1935 he was also Minister of Transport.

Wilhelm Schmidt managed the company as technical director. The pilots came from Germany. Unlike the CNAC, there was no subsidy other than airmail revenue. High officials had to be promoted for free. In the 1933 financial year, 813 passengers were transported over 399,000 passenger kilometers. Rapid expansion followed with six new aircraft (Ju 33 and 34), so that in May 1934 alone 161 passengers were carried over 70,000 km.

Due to the circumstances of the time, the company's headquarters were relocated to Siân at the end of 1937 . The ten-year partnership agreement was only extended annually after 1940. The company, which had not received any spare parts since July 1939, existed until June 1943. In fact , it had been bankrupt since July 1941 and only worked on behalf of the state after all Germans had left the country in September. Five Chinese pilot teams had been trained by 1940, the first having been in service since 1938.

The airmail and passenger service Berlin - Shanghai (6 days via Siberia), which began in May 1931, had to be abandoned soon after the Mukden incident (Sept. 1931), after a Ju 33 had already been in July, which covered the Beijing- Manchouli (满洲里) had been forced to land by rifle fire. Instead, an international connection to Berlin was created via Indochina, India, Baghdad and Greece (pure flight time 53 hours, 14,000 km). The Beijing - Canton route, up to the introduction of the Ju 52 with an overnight stay, cost ch $ 330 in 1934.

At the end of 1937 only the routes from Sian remained, with Canton and Chengchow being canceled as landing sites.

From Langchow the route was extended to Urumchi and the Russian border to Tacheng (塔城), which was discontinued as a result of the fighting for the Islamic Republic of East Turkestan in 1933-4. At its peak in 1939, the domestic route network served again reached 7,660 km in length. The Sian - Chengtu - Yünnan-fu route continued to Hanoi until the summer of 1940 . After the French surrender, the route could only be operated again from September, only with German crews.

In the summer of 1939, the Chungking- Hami line was established . From there, until 1941, the Hamiata provided the connection to Alma Ata with leased Eurasia machines .

Three machines were lost in the first year of operation, and they were quickly replaced. Carl August von Gablenz flew the first Ju 52 to China in September 1934. From 1936 about three quarters of the passenger kilometers were carried out in aircraft of this model.

The company was headquartered at Man Fuk Rd 226, Canton. The Kwangtung Province government participated in the capital.

The routes were usually operated twice a week. Canton - Lungchow (龍 州) continued to Hanoi until the summer of 1940.

In early 1938 the fleet consisted of 5 Stinson Reliant or RS-5s and a Curtiss .

The Hui T'ung Aviation Co. was with General Chang Yueh-yung as director, October 23 / 14th Nov. 1936 founded in Tientsin. It was under the control of the Beijing Republican government, the Autonomous Military Council of East Hopei , which also held half of the capital. The other half was taken over by the South Manchurian Railway .

When flight operations began, the one existing Fokker F.VIII -3m served the Tientsin - Dairen route . Six Fokker Super Universalis , built under license by Nakajima Hikōki , flew from the newly built Tientsin airport via Beijing on the routes to Chingho via Shanhaikuan or Kalgan and on to Changpei . Two de Havilland DH.80 Puss Moth flew to Chengteh in Jehol Province .

The Nakajima AT-2 delivered in February 1937 was used for sightseeing flights. In the same year four more machines of this type were acquired, plus five 6-seaters. On June 1st, operations to Tokyo via Darien and Seoul could begin (on a trial basis) . Soon after the China Incident began, on December 10, 1938, the company was transformed into China Aviation Co. (China Air Transport Co.). The company's headquarters were now in Beijing, the previous Vice President Kudama Tsuneo became the boss . The shares were now held by Dai Nippon Aviation ( Imperial Japanese Airways ) and the Provisional Government of the Republic of China (中華民國 臨時 政府).

On August 24, 1938, two planes launched in Haneda collided. After the crash, fires started in which, in addition to the crews, depending on the source, 45 dead and 106 injured or 82 dead.

Under the new name, additional routes began to be operated in 1939/40:

The reorganized government of the Republic of China was involved in the company founded in Shanghai in December 1943 . They flew Mitsubishi MC-20 machines, which fell into the hands of the CAT in 1945.

After the conclusion of the Sino-Soviet non-aggression pact on August 21, 1937, Aeroflot initially operated the route to Lanchow via Alma-Ata, primarily for the needs of the military stationed in East Turkestan. After negotiations starting in 1938, they agreed on a joint connection between Moscow and Hangkow, opened on March 24, 1939. The section between Hami and Alma Ata procured leased Eurasia planes with Chinese crews. The Soviet Union in turn provided two new DC-3s.

On November 15th, Hami-Ata was jointly founded . Each of the two half-participating states appointed three directors, the Russian side provided the technical equipment on the ground. Fuel was driven in trucks for days through the desert to the landing sites. Under the new name, the route was operated for the first time at the turn of the year with stops in Ili and Urumchi. after an interruption, operations were resumed in May 1941 for the summer. The four Russian pilot teams flew almost exclusively Soviet military and advisors of the Second Republic of East Turkestan (東突厥斯坦 共和國). From 1943, DC-47s were used on the Russian side. The flights ceased in April 1944. After the Soviet Union had agreed with the KMT government to withdraw from Sinkiang, the CNAC took over the installations on February 23, 1945. Russian statistics show a total of 2370 passengers, 1088 tons of freight and 87 tons of mail for the route for 1939-46.