The area within the former, partially still preserved city ​​fortifications of Euskirchen is called Euskirchen Old Town . The course of the city ​​wall can still be clearly seen - where it was torn down are the "Wallstraßen" (Kirchwall, Rüdesheimer Torwall, Disternicher Torwall, Kessenicher Torwall and Neutorwall).

The old town, which houses most of the pedestrian zone , is now Euskirchen's shopping center. In it are St. Martin and Herz-Jesu, the two most imposing church buildings in the city.

After the town, which had become a town in 1302, was only protected by trenches and ramparts, massive town fortifications were built from 1355 onwards. The first section of the city wall is being built in the north and extends from the Dicken Turm to the Kallenturm. The 1450 meter long city wall in the southern area will not be completed until a century later. Seven defense towers were supposed to protect the city; initially three city ​​gates to the settlements of Kessenich, Rüdesheim and Disternich were built. A fourth breakthrough came later.

The weir system was built from red sand and light-colored rubble and was surrounded by moats. To which up to one meter high and seven meters high walls were ramparts attached. In 1538 a 20 meter high bastion for guns was built near the Kallen and Fang Tower , which was laid down in 1899. In 1697 the moat was divided into fish ponds. In 1702 the fortification was badly damaged by the French and then fell into disrepair until demolition began in 1906, as it was considered to be a hindrance to the city's development.

Parts of the city wall have been preserved to this day, especially since they were incorporated into individual residential buildings as a load-bearing wall.

During the construction of the city fortifications, three gates were built that led to the settlements of Kessenich, Rüdesheim and Disternich, which were incorporated into the city when the city was founded, and therefore also bore their names. None of the city gates have survived.

In the north was the first city gate of the new defense system, the Kessenicher Tor. It was the mightiest gate and stood on Kessenicher Straße between Kirchwall and Kessenicher Torwall between Pitschen and Kallenturm. The latter has been preserved along with a piece of the city wall. On October 9, 1702, the gate was blown up by the French and finally demolished in 1842.

The Rüdesheimer Tor led to the settlement of the same name about one kilometer to the southwest. It was between Rüdesheimer and Disternicher Torwall on Kapellenstrasse. On the square between Kapellenstrasse and Bischofstrasse (Judengasse until 1823), small cattle such as pigs, goats and sheep were traded, which earned it the name “Viehmarkt” (“pig's mate”). In 1842 the gate was demolished.

The Disternicher Tor stood on the elevated road between Disternicher and Neutorwall. Below the gate, the Mühlbach, which filled the moats in front of the fortification, flowed into the city, which it left at the Kallenturm. The Disternicher gate is said to have been the template for the city arms. In 1746 the gate fell into disrepair and was largely demolished in 1810 until it was completely dismantled in 1851.

The Neutor was not a city gate in the traditional sense, but just a wall breakthrough that was only built in 1809 to create an eastern access, as the city had meanwhile expanded. It was located at today's intersection of Neustraße and Neutorwall.

Three of the former six defensive towers of the city fortifications have been preserved. When the defensive system was devastated by the French in 1702, the roofs of all the city towers were destroyed and later reconstructed.

The Big Tower, the oldest preserved town tower, has a diameter of 11.30 m, is flattened towards the town side, and its walls are up to 265 cm thick. The tower stands on the northeast corner of the city fortifications not far from the Martinskirche on Kirchstrasse. In 1702, the roof and the vault of the basement were blown up by the French. On the upper floor there is a vaulted hall with a large fireplace adorned with coat of arms , loopholes and a door to the former battlement. The roof was reconstructed in the 1950s. From 1992 to 2010, part of the Euskirchen City Museum was housed in the thick tower .

The half-tower is hidden behind the Martinskirche not far from the thick tower, but can be seen very well from Annaturmplatz.

The Annaturm stood in the middle of today's Annaturmstraße at the height of the church wall. As early as 1857 it was decided to demolish the tower and to lengthen the road leading to it. It was not until 1880 that the tower was blown up, but with the condition that the Kallenturm be preserved. In 1911, the “new market” named Annaturmplatz was built right next to the former Annaturm.

The Pitschenturm was a half tower between Annaturm and Kessenicher Tor. It was integrated into a house as early as the 18th century and was the tax office until 1813. This is where the name comes from, as "abpitschen" was the popular paraphrase for tax claims. The building was destroyed in a bomb attack.

The Kallenturm was the eastern end point of the first construction phase of the city wall. It got its name because the Mühlenbach, which flows into the city at the Disternicher Tor, is led out of the city in a channel (Kalle). The tower, which was preserved thanks to a decision by the Prussian district government, is now in a green area at the rear of the Spiegelstrasse multi-storey car park. In front of it was a bulwark from 1538. Since the tower was without a roof for a long time, the Euskirchener called it Kahlenturm ever since. The destroyed roof was reconstructed in 1992. Today the tower is used by scouts .

On the current site of the Herz-Jesu-Kirche was the fan tower, which was popularly known as the “Hell Tower”. Although the tower served as a prison and instruments of torture were found in it, the name Höllenturm does not come from the seat of the devil, but from the Höller family, who later leased the meadows and ponds belonging to the city fortifications. In 1908 the fan tower was demolished because it had to make way for the Sacred Heart Church. A memorial plaque is now attached to its former location .

In contrast to the towers on the north side, the only remaining tower of the south fortification is completely round and has loopholes in the lower area. "Fresen" was a dialect synonym for "horror", which refers to the function as a dungeon. But the riflemen of the civil brotherhood , who still have their rifle house nearby , also used the tower. The Fresenturm stands on the Disternicher Torwall, not far from the Disternicher Tor in a green area that was created outside the fortification. Like the Kallenturm, the Fresenturm is used by scouts today.

At the latest since the granting of market rights in 1322, the old market on the border between the Disternicher and Kessenicher districts developed into the center of the still young city as a trading center for fruit, cattle, junk and wool. In 1606 a public fountain was built, which was replaced by a pump pillar in 1867. Around 1625 there is also a pillory on the old market . From the 19th century, fairs and other political and religious festivals take place in the square. The Hotel Joisten was also part of the representative bourgeois development until it had to give way to a commercial building in the 1970s.

In 1980 the square was incorporated into the pedestrian zone, and since 1984 there has been a city fountain again, which is designed with motifs from local economic history. Even today, events such as B. parts of the fair or music events take place, until 2009 also the Christmas market .

The two largest churches in the city are now located within the former city fortifications.

The Martinskirche is the oldest surviving structure in Euskirchen. The current building dates from the second half of the 12th century. Before that there was a church from the 7th or 8th century, which was built on Roman foundations - the first evidence of Roman settlement in the center of Euskirchen. The 1951 earthquake affected the church. Since then the spire has been crooked. 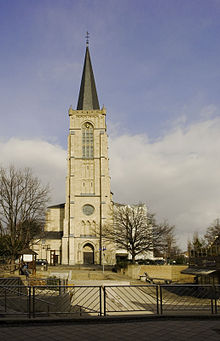 Euskirchen, Church of the Sacred Heart of Jesus

Between 1906 and 1908 the Herz-Jesu-Kirche was built on part of the former city wall and the Fangenturm and in 1924 was elevated to a parish church. On Christmas Eve 1944 the church was badly damaged in bombing raids and from 1957, in a partially modified form, was rebuilt by the architect Gottfried Böhm. Today it is located in the middle of the city center on the Neustraße shopping street and significantly shapes the city's silhouette .

The neo - Gothic three-aisled hall church was built according to plans by Aloys Schlößer. It is 62 m long and 23.8 meters wide and has a four-bay nave with a 33.9 x 11.7 meter single-bay transept and a polygonal choir closure. The upstream five-storey tower with a spire is 70.2 meters high. During the construction, low-end quarry stone and otherwise white tuff stone were used in the base area . 1962-1963 was Portal of bronze and the tympanum of sandstone by the sculptor Helmut Moos redesigned. 1975 to 1976 and 2009 the Sacred Heart Church was completely restored.

Without a chapel and organ stage, the church can comfortably seat 2000 people.

The town hall , located between the Altem Markt and Martinskirche, probably dates from the 14th century. It was first mentioned in 1501. In 1533 it was almost completely destroyed in a major fire in the city. It was then rebuilt in the Renaissance style. After another fire in 1734, it was restored in the Rococo style . The current appearance of the striking tower dates from around 1900. During the Second World War , the extensions were destroyed again and rebuilt in 1952 according to old models. The historical finds can now be viewed in the old town hall. In the 1970s the city administration moved to Kölner Straße.

Districts and neighborhoods in Euskirchen