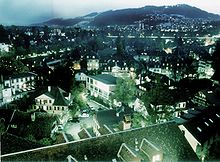 The Bernese Marziliquartier at dusk 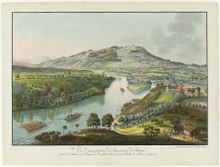 The Marziliquartier, usually called Marzili for short , is located in the south of the city of Bern , below the city center on the Aare and is part of the statistical district of Sandrain and thus belongs to district III, Mattenhof-Weissenbühl .

The name of the quarter was first mentioned in documents in 1328 as Marsili and in 1383 as Marzihli . According to a popular legend, it derives from the city of Marseille (medieval: Marsica ); Huguenots expelled from Marseille would have brought the name with them. The name is more likely based on the personal name Marsilius; The possession of a person with this name in Bern is documented. In the 19th century the name was changed to Aarziele , because the Aare flows directly past the quarter. This name can still be found today in the name of a row of houses.

The people of Bern usually mean the Marzilibad in Marzili , a popular outdoor pool on the Aare, when they talk about the Marzili.

The Marzilibahn and the stairs from the Marzili to the Kleiner Schanze connect the district with the city center.

In the Marzili there are many meeting places for culture, such as the steam center , the gas boiler and earlier also the theater department of the Bern University of the Arts .