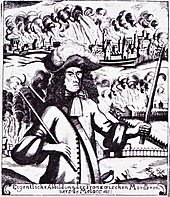 Mélac with fire torch, work of the sculptor Peter Lenk in Hirsau

Ezéchiel du Mas, comte de Mélac (* around 1630 in Sainte-Radegonde in the Gironde department , † May 10, 1704 in Paris ) was a French officer under King Louis XIV and Minister of War Louvois .

Mélac entered the military at an early age and became a lieutenant in a cavalry regiment in Portugal in 1664. Two years later he was appointed chief of a company. At the beginning of the Franco-Dutch War , he served in Flanders in 1672. In 1675 he was promoted to brigadier des armes du roi and in 1679 to mestre de camp . He became governor of Schleiden (40 km southeast of Aachen ).

From 1686 Mélac served in the army of Marshal Catinat in Savoy . In April 1688 he was transferred to the French Army of the Rhine under the command of Marshal Jacques-Henri de Duras . In the same year he married his daughter. In September 1688, the Rhine Army marched into the territories of the Electoral Palatinate and areas east of the Rhine , mainly the Margraviate of Baden , without a formal declaration of war . The cities of Heilbronn , Heidelberg and Mannheim (November 10th) were subjugated and the Philippsburg fortress was taken. Pforzheim had been occupied since October 10th. Mélac was stationed in Heilbronn under the command of Marshal Joseph de Montclar . With Heilbronn as a base, he and his troops devastated the surrounding areas, including the imperial city of Donauwörth , Marbach am Neckar and Schorndorf . Towards the end of the year he attacked Heidelberg, the capital of the Electoral Palatinate, and many villages along the Neckar and Bergstrasse , including Ladenburg .

On February 16, 1689 blew up French troops under the command of Mélac and the Comte de Tesse the Heidelberg Castle in execution of a command of war minister Louvois , and on March 2, was put the city of Heidelberg on fire (but most fires were of the population to be deleted). Mannheim was set on fire on March 8th , later Frankenthal , Worms , Speyer and numerous villages on the west side of the Rhine were devastated. Landskron Castle and the town of Oppenheim were completely destroyed on May 31 . On the east side of the Rhine, Bretten , Knittlingen , Maulbronn , Pforzheim , Baden-Baden and numerous other towns and villages suffered the same fate, but it is not always clear to what extent Mélac was involved. In the case of Pforzheim, it was reported that Mélac was the commanding officer and was thus directly responsible for the shelling of the city on August 10 and the devastating fire in the following days. There is also a report according to which he is said to have raped the young pastor's daughter Anna Catharina Haug (1667–1743) in Esslingen am Neckar .

In 1693 Mélacs was promoted to the Maréchal de camp . In spring Mélac was appointed fortress commander of the strategically important fortress Landau . From there he terrorized the surrounding areas, up to (today's) Rheinhessen and Württemberg . In May he took part in the second and final destruction of Heidelberg . On September 20, 1692 he had the monastery church, the monastery school and the Hirsau castle burn down. The War of the Palatinate Succession ended with the Peace of Rijswijk . Landau remained under French sovereignty and Mélac fortress commander. In 1702, Landau was besieged by the imperial army under the command of the Baden margrave Ludwig Wilhelm in the course of a new conflict, the War of the Spanish Succession . Mélac and his troops were able to withstand the siege for four months. In order to maintain the morale of his soldiers, Mélac had gold and silver objects from his personal possessions melted down and minted in coins distributed to his soldiers as a salary. However, in September he was forced to surrender. He received permission to withdraw with his garrison and part of his artillery . He then left the Rhine Army and went to the French royal court at Fontainebleau , where he received 30,000 livres as a pension , but did not receive a final promotion. He died on May 10, 1704. 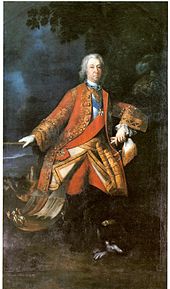 The French troops of Mélacs devastated large parts of the Electoral Palatinate and cities in Württemberg and Baden with great brutality during the War of the Palatinate Succession from 1688 to 1697 . Thus the barbaric policy of the fortification of the cities and castles as well as the burning of the villages with the destruction of the livelihood and murder of the population was put into practice.

In the south-west of Germany, Mélac's name became the epitome of “ murder burner ” or “ marauder ”. The name Mélac is still notorious in the Palatinate and Baden today. Up until the 20th century it was not uncommon there to name domestic dogs Mélac (often also Mellag ). The swear word " Lackel ", which is still in use in the Palatinate, is also said to go back to the name of the murder burner.

The legend of the girl from Esslingen tells how his deed saved the city from being pillaged by Mélac and his troops. It spread in Swabia in the 18th century, was made into poems by Eberhard Friedrich Hübner (1791) and Gustav Schwab (1816) and the novella Das Mädchen von Esslingen (1831) by August von Witzleben ( alias A. v. Tromlitz ) processed. Mélac is also mentioned in Karl May's novel Die Liebe des Ulanen (1883–85).