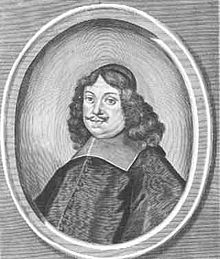 Friedrich von Hessen-Darmstadt (born February 28, 1616 in Darmstadt , † February 19, 1682 in Breslau ) was a cardinal of the Roman Catholic Church and Prince-Bishop of Breslau . He came from a Protestant family but converted to Catholicism in 1637. This conversion ultimately earned him the prestigious cardinal title. He ended his life heavily in debt as Bishop of Wroclaw .

The monetary demands made by Friedrich von Hessen-Darmstadt on his brother, however, did not end even after the curia assumed the debt. The Grand Master of the Order of Malta made him coadjutor of the Prince - Grand Prior of the German Empire . In Malta he had also been promised a generalate, which meant that he had to pay for the establishment and maintenance of a force. His brother, who had reacted relatively calmly to the younger brother's transfer, actually provided him with sufficient funds so that he could equip a small fleet by 1640 . With this the militarily inexperienced Friedrich von Hessen-Darmstadt was able to achieve a military success. He succeeded in defeating a Turkish fleet that was anchored off the Tunisian coast. However, the financial means available to him were not enough after the victory to re-equip the troops. He then resigned his command.

In the spring of 1641 he returned to Rome, where he was allowed to live in the Vatican. Francesco Barberini, however, stopped making regular payments to the young landgrave, who was characterized above all by a social life that was accompanied by a high financial outlay. On December 30, 1641, Friedrich von Hessen-Darmstadt traveled on to Vienna . From Emperor Ferdinand III. he hoped for the transfer of a command. However, he only received a letter of recommendation for the Spanish court, where Philip IV, a member of the Spanish line of the Habsburgs, ruled. He also received verbal confirmation from the emperor that he would campaign for the award of a cardinal's hat to Friedrich von Hessen-Darmstadt.

As in Rome, Friedrich von Hessen-Darmstadt also led a luxurious life in Madrid, which in turn led to a high mountain of debt. He was not assigned a military task by the Spanish royal court. The historian Ulrich Köchli sees this as evidence of the inadequate military skills of Friedrich von Hessen-Darmstadt, since Spain at that time had a very large need for military forces. However, Köchli does not rule out that the demands of Friedrich von Hessen-Darmstadt were so excessive in Madrid and that his mind was too inclined to the merrymaking of court life that he would have seriously sought a job. He put more energy into obtaining the cardinal's hat. He addressed at least two petitions to Francesco Barberini to award him with the cardinal's hat. Urban VIII died, however, in 1644 without complying with Frederick's requests.

From 1647 Friedrich von Hessen-Darmstadt resided in Brussels , where this time the regent of the Netherlands actually gave him military command. However, no military involvement can be proven. In the same year he became Prince of Heitersheim and Grand Prior of the Order of Malta in Germany. In 1653 he had the Malteser-Jagdschlösschen Weinstetter Hof near Eschbach (Markgräflerland) , which was destroyed in the Thirty Years' War , rebuilt and splendidly furnished. In 1650 Friedrich von Hessen-Darmstadt was also the owner of three members of the order ( Hohenrain , Mainz and Niederweisel ) of the Order of Malta; However, due to his lavish lifestyle, he was unable to make a living from it. He accused his brother, who ruled in Hessen-Darmstadt, of withholding the income he was entitled to from his inheritance. His plan to get his brother to pay by taking the fortress of Rüsselsheim was thwarted by the Elector of Mainz. Its mediator Eberhard Wolf von Todenwarth (1614–1663) managed to reach a comparison between the two brothers. In Darmstadt, where he was staying for the first time in twenty years to seal his reconciliation with his brother, he received the news that Pope Innocent X had finally elevated him to cardinal at the suggestion of the emperor in the consistory of February 19, 1652. Until 1655 he then resided in Heitersheim. From 1655 he was appointed cardinal deacon of the titular church of Santa Maria in Aquiro by the Pope . In the following years he frequently changed his titular church, most recently he held Sant'Agata de 'Goti from 1670 .

Innocent X died in 1655 and the ensuing conclave was the reason for Friedrich von Hessen-Darmstadt to return to Rome. Once again, his lifestyle was associated with great financial expense. He made repeated efforts to obtain additional benefices and income by seeking a variety of offices and titles. However, he only received a few canons' posts. His return trip in 1659 was only possible because his brother helped him out financially. For the next few years he stayed mainly in his residence in Heitersheim. His brother had died in the meantime, but also with his son Ludwig VI. the struggle for financial resources continued.

Cardinal coat of arms as Prince-Bishop of Wroclaw

The cathedral island with the Breslau cathedral . The Elisabeth chapel of the cathedral houses the burial place of Friedrich von Hessen-Darmstadt

Another stay in Rome

In view of the foreseeable death of Alexander VII , Friedrich von Hessen-Darmstadt returned to Rome at the beginning of 1666, where he was to reside for the next 10 years. After all, he received two important offices there: a canonical at the Breslau Cathedral and the appointment of Protector Germaniae by Emperor Leopold I. As such, he had to represent the emperor's interests at the curia. In his biographical essay on Friedrich von Hessen-Darmstadt, the historian Ulrich Köchli described this decision as difficult to understand, since the cardinal was already during the pontificate of Pope Clemens IX. was in dispute. Among other things, he made the unreasonable demand that all correspondence from the Cardinal Secretary of State to the imperial court in Vienna must be submitted to him. During the pontificate of Clement X , he was even involved in a scandal involving customs offenses and forbidden gambling . The appointment as Bishop of Breslau in 1671 was therefore probably also a measure to release Friedrich von Hessen-Darmstadt, who was also increasingly cautiously judged by the imperial court, from his role within the Curia.

In February 1672, Friedrich von Hessen-Darmstadt received the higher orders, which he had previously had to renounce through papal dispensation . Up to this point in time he could have resigned as a dynastic cardinal if the succession in Hessen-Darmstadt had made it necessary. Such a return to the worldly state was rare; Cardinal careers such as that of his former sponsor Maurizio di Savoia, who not only resigned his cardinal office because of a peace treaty, but also subsequently married his niece, 36 years his junior, are the exception. Clemens X, however, at least allowed Friedrich von Hessen-Darmstadt to keep all of the benefices he had won. For consecrated bishop was Frederick of Hesse-Darmstadt had to February 5, 1673 when he first acquire the necessary for the Office of theological knowledge. However, Friedrich von Hessen-Darmstadt did not go to Breslau until March 1676. This was preceded by a renewed dispute with the Pope and his Curial Cardinals, especially Cardinal State Secretary Paluzzo Altieri . As a mediator in this conflict, the former cardinal depository Francesco Barberini was turned on. In the course of these disputes, the Pope openly invited him to leave for Wroclaw. Friedrich von Hessen-Darmstadt, who was considered to be quick-tempered, only followed the request when he was given the lucrative office of governor of Silesia and the income was linked to a strict residence obligation in Breslau.

As a bishop in Breslau

As a bishop in Wroclaw, he campaigned for the re-Catholicization of Silesia and tried to implement the resolutions of the Council of Trent . He visited his archdeaconates in Breslau, Liegnitz , Glogau and Opole to implement these reforms in both 1677 and 1679. He also campaigned for the fight against the plague that had struck Silesia in 1680. However, as early as 1680 there were signs of intellectual decline. From autumn 1681 he fell into mental derangement. He died on February 19, 1682. His death was followed by a protracted argument over the repayment of the debts left by the cardinal, who was inclined to the luxury of living. He was buried in the chapel of St. Elisabeth in the Wroclaw Cathedral.