Günthersleben-Wechmar was a municipality in the Thuringian district of Gotha , which was founded in 1997. She has been part of the Drei Gleichen community since July 6, 2018 . The municipality Günther-Wechmar the districts were Günthersleben and Wechmar .

Selection of sights in Wechmar

Millstone in front of the Veit Bach mill

Bachstrasse, in the background "Golden Lion" 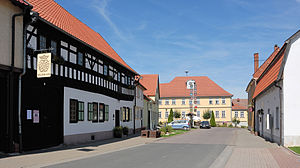 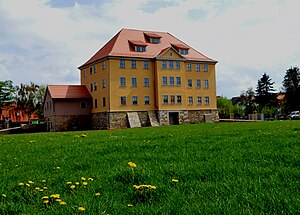 Günthersleben and Wechmar are located southeast of Gotha in the fertile glacial valley of the Apfelstädt at an altitude of 278 to 369 m above sea level. NN. A chronicle published by the municipality in 2001 therefore also bears the title In the valley of wild water . The parts of the former municipality separated by the river are connected by a bridge.

Günthersleben and Wechmar are connected to traffic via the Gotha exit of the A4 motorway. Due to an industrial park that was created in the 1990s, the districts have grown together structurally.

Günthersleben-Wechmar bordered the municipalities of Gotha, Drei Gleichen , Ohrdruf , Hohenkirchen and Schwabhausen . In the municipality, 2999 inhabitants (as of December 31, 2016) lived on 26.82 km² .

Early on there was lively life in the valley basin between the 320 m high vineyard (in the northwest of the village), the up to 409.2 m high Seeberg in the northeast, the 383 m high Röhnberg (in the southeast) and the 460 m high Hainberg in the south which is proven by the many prehistoric and early historical finds. Soon the slopes of the surrounding mountains and the individual hills emerged as the main settlement areas. In 1973 a settlement from the year 4000 BC was built on the Heiligen Lehne (southern tip of the Seeberg ). Discovered BC, and traces of an early settlement can also be found on the Röhnberg. The oldest demonstrable settlement was in the parcel "Tiefenbach" (headwaters in the northeast of Günthersleben), where people lived more than 5000 years ago. The prehistoric grave cemetery, which was recovered in 1937 in the “Altfeld” between Wechmar and Wandersleben, bears witness to hikes and settlements of the Hermundurs and Burgundians .

In the time of the Kingdom of Thuringia around 500 AD, the region was favored by the trade route that passed here, called “The High Road”, which came from Erfurt through the ford of the apple cities to southern Germany. This trade route was subject to the special protection of the sovereigns and was secured by castles. One of these protective castles was in Wechmar. It was originally built as a tower hill castle and stood in the area of ​​the later manor in the east of the village. Lords of Wechmar, from whose family Rüdiger Freiherr von Wechmar emerged in the 20th century, one of the most famous German diplomats, have been named in a document since 1140. They were ministerials to the Counts of Käfernburg and then to the Counts of Gleichen . Later they allied themselves with the city of Erfurt . When the Counts of Wechmar moved to South Thuringia, ownership of the castle changed constantly. A few remains of ramparts and ditches are evidence of the original fortification.

The first documentary mention of both villages can be found in the Breviarium Lulli , a list of properties of the Hersfeld Monastery from the year 786 as villam wehemare and gonresleibin . In a deed of gift dated May 18, 874, Gonrichisleba, along with other 116 places in Thuringia, is mentioned as the Fulda Abbey. Archbishop Liubert zu Mainz as well as Abbot Sigehard zu Fulda asserted the right to raise the tithe for themselves. The dispute over this was decided by King Ludwig the German (840–876) at the court of Ingelheim in favor of the Fulda Abbey. The Wechmar royal court mentioned in the document of 786 offered admission for a court day of Emperor Otto II on June 2, 975. On February 7, 1086, Emperor Heinrich IV stayed for a court day in Wechmar's royal court.

During the Second World War, numerous men and women had to do forced labor : a family with five children on the von Swaine family estate in Günthersleben and 70 prisoners of war from Poland in Wechmar on the Willy Hesse manor . In the Thuringian machine factory on Gothaer Straße, women and men from Ukraine , Russia and Poland as well as military internees from Italy had to work. A Polish slave laborer was hanged in public, a memorial stone erected in 2002 commemorates him.

Frank Ritter (independent) has been mayor of the unified community Günthersleben-Wechmar since 2006.

For more than 15 years, the SPD / Open List voter community had an absolute majority in the local council. In the 2014 municipal council elections , the CDU was chosen as the strongest force and, with six seats, received the most seats . The last parish council was composed as follows:

There are two Protestant Lutheran churches in Günthersleben-Wechmar: the St. Petri Church in Güntersleben and the Sankt Viti Church in Wechmar.

28 clubs determine the cultural and sporting life in Günthersleben and Wechmar. About half of all residents are involved in associations and are thus actively involved in community life. Every year in July / August there is a village and local festival, which is accompanied by international sports competitions, historical festivals and concerts throughout the year.

The two volunteer fire brigades in Günthersleben and Wechmar are important for community life and security.

Both localities were mainly characterized by agriculture until 1950. Many residents earned their living in the nearby towns of Gotha and Ohrdruf , and their wives worked the fields. While seven manors of aristocratic and later middle-class families emerged in Wechmar, in Günthersleben there were only the lords of the moated castle as the largest landowners. In the 19th century there were two manors in Wechmar, while in Günthersleben Johann Christian von Weiß took over the moated castle. He ran a successful sheep farm and had the wool processed in his spinning mills in southern Thuringia. Crafts have played an important role in both villages for a long time. While pottery used to be widespread in Günthersleben, there were rare craftsmen in Wechmar such as saltpeters , coppersmiths , basket makers and sculptors . Today, small and medium-sized businesses dominate the community's service sector.

Since the democratic change in 1989, the communities Günthersleben and Wechmar have practiced close cooperation, which was reflected in the development of the "Oberried" industrial park that began in 1991. 40 companies with around 800 jobs have settled on an area of ​​35 hectares. The industrial area forms the economic axis between the two localities. Since 1998, the municipality has been developing a new communicative axis in addition to the economic merger, which enables citizens to meet. These include the “Burgenland” elementary and regular school, the youth club, the “Kartoffelhalle” (festival hall for 2,000 guests), a bowling center with four-lane facilities that was inaugurated in 2003, the community center with 300 seats and the modern town hall. The Siebengehege residential area in Günthersleben and its planning development up to Wechmar form the basis for merging the two villages in the landscape.

In 2002 the place was awarded the title “Most senior-friendly community in Thuringia” and “Thuringian cultural community 2002”. The Wechmarer Heimatverein eV was awarded the Thuringian Monument Prize in the same year . In 2003 Günthersleben-Wechmar was named “Most beautiful village in Thuringia 2003”, and one year later it was named “Best community promoting voluntary work in Thuringia 2004”. In addition, the community received a gold medal in the national competition "Our village should be more beautiful - our village has a future".

Famous personalities were at home in Günthersleben-Wechmar in past centuries. The Bach family of musicians was born on the Wechmarer Markt . Veit Bach and his son, the minstrel Hans Bach , lived in the Oberbackhaus and in the Veit-Bach-Mühle . They are the progenitors of the family of musicians. Her places of residence and work today are two museums and educational institutions.

With the Artmann family, musical instrument making found its way into Wechmar in 1750 . Georg Valentin Artmann and his son Johann Nikolaus made Cremonese violins in the village, some of which later achieved world fame. Her last student, August Küttner, built instruments in Günthersleben from 1860 onwards. The Bach parent company presents two instruments from this Thuringian family of violin makers . The Hanff family had their home in Wechmar long before the Artmann family. Its most famous member is Johann Nicolaus Hanff from Wechmar , who worked as cathedral organist in Eutin and Schleswig until 1712 .

Otto von Stotternheim (formerly Stutternheim), who later became the rector of the University of Erfurt, was born in Günthersleber Wasserburg in 1380 . Günthersleben is also the home of the most famous horticulturist Johann Volkmar Sickler. He owes the breeding of the "Piedmont" - or heart cherry . Sickler is considered to be the founder of fruit growing on the Fahner Höhe near Erfurt, which is still in bloom today . On June 1, 1849, Friedrich Seitz was born in Günthersleben , who became known as a composer and court conductor in Magdeburg and Dessau . His most famous student was the later film diva Marlene Dietrich .