Gersbach is a state-approved resort and district of Schopfheim .

Gersbach in the mountain

Gersbach is located in a high valley basin of the eponymous brook in the southern Black Forest at an altitude of 800–1170 m above sea level. The spatial distance to the old town of Schopfheim is 16 km and 600 meters in altitude. The formerly independent village and the six hamlets belonging to it (Fetzenbach, Gersbach-Au, Lochmühle, Metteln, Neuhaus, and Schlechtbach) form Baden-Württemberg's largest district on an area of ​​2009 hectares .

The Rohrenkopf ( 1173  m ) is Gersbach's highest point. When the weather is clear, the Swiss Alps with the “triumvirate” Eiger , Mönch and Jungfrau can be seen. Many other viewpoints in the area, such as the Hohe Möhr ( 989  m ) near Schlechtbach, provide a view of the border triangle Germany-France-Switzerland.

Gersbach belongs to the following regions: Markgräflerland , Baden , Black Forest , Southern Black Forest and, in a broader sense, to the Hotzenwald .

A weather station in Gersbach measures more sunny and colder winter days than the national average. A noticeable wind usually blows on the heights of the Black Forest in summer. Therefore, even on very hot summer days, the perceived temperature in Gersbach is lower than the measured temperature.

Gerisbac is mentioned for the first time in 1166 in a document from Bishop Otto von Konstanz when a church was donated by Konrad von Hosskirch to the St. Blasien monastery . It later came under the rule of the Margraves of Hachberg . In the 14th century, the Habsburgs tried to gain jurisdiction over the town, but failed. From 1365 to 1400 Gersbach belonged to the Knights of Schönau , but fell back to the Margraves around 1400.

In 1258 there was evidence of a pastor living in Gersbach for the first time. After the Reformation the ownership changed: Gersbach was sold to Baden . At the same time Gersbach received the Protestant denomination.

At the end of the 17th century, Margrave Ludwig Wilhelm von Baden-Baden (1655–1707) had an extensive fortification, rampart and barrier system built to defend against French raids. On 19./20. May 1784 a third of the village fell victim to a fire disaster. The former mining of silver , pebbles ( vitriol ) and iron ores is documented for the first time in 1794, but began much earlier. In 1995 the Minifossi group (a student group) found gold for the first time while researching baroque hills and abandoned tunnels .

On October 1, 1974, it was incorporated into Schopfheim .

The population is supplied with water from a mountain spring in the municipality. Their water is soft according to German degrees of hardness (about 3 ° dH).

Hydropower is the Gersbachs on the gradient-rich section of the mouth into the Wehra hydroelectric used.

There is a primary school in the village and next to it a small, volunteer-run library.

In the southern part of the village stands the Evangelical Church from the 18th century, the origins of which are documented up to the 12th century.

In Gersbach, the direct marketing of domestic agricultural products is of relatively great importance. The Chäs-Chuchi , part of the cheese route in Breisgau and the southern Black Forest, produces cheese from milk from local farmers. Cheese, meat and sausage products are only marketed in the region.

In addition to agriculture, forestry is traditionally an important industry in Gersbach. Many forest areas are sustainably managed as Plenterwald and Femelwald . From these forests that originate silver fir , which at the exhibition center in Hannover since the World's Fair Expo 2000 , the largest cantilevered wooden roof support in the world. The 70 fir trees used for this were around 200 years old and reached a maximum height of 50 meters and a diameter of 1.50 meters on the stick and 0.9 meters on the plait. Their weight was 9 to 14 tons.

There is a protected forest in the area, in particular for research into communities in dead wood and as an object for demonstration of undisturbed forest development in the forest ecosystem .

The state-approved resort of Gersbach is well developed for tourism. The association Tourismus Gersbach e. V. The primary development goal is gentle tourism . The most important groups of visitors are hikers, mountain bikers and those looking for relaxation.

The altitude of around 1000 m makes the place attractive for winter sports enthusiasts. There are cross-country trails, sledge slopes and a ski lift available. The Bergbrunnenlift offers floodlit evenings twice a week.

Further offers are nature trails , e.g. B. the cattle trail, the village trail or the sculpture trail. On request, guided hikes are also offered, for example with the district forester on an approx. 3.5 km long nature trail or guided tours with committed villagers to the baroque fortifications ,

The nearby Wehraschlucht has a reputation among canoeists as one of the most demanding white water in Germany, which is mostly visited in late winter and spring.

Until 1992, the Great Fir was the largest white fir in Western Europe in the Gersbach Forest. Due to fungus infestation, the giant tree had to be felled for safety reasons. It was about 400 years old and at a height of 52 m it reached a circumference of seven meters. The trunk with a total wood mass of 40 cubic meters was left on site as a demonstration object for the decomposition of wood by decomposers in the forest ecosystem .

In 2003, a pasture park with a cattle educational trail was created on a 33 hectare area . On a circular hiking trail, boards provide information about the appropriate breeding and keeping of cattle and their use as food (milk, meat, fat) and for other purposes (leather, horn, fertilization). In addition to the native species, exotic species and the last wild cattle species in Europe can be found in a near-natural bison enclosure that is already successfully breeding. 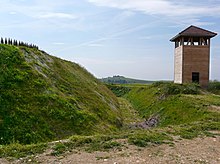 In 2008 the so-called Barockschanze was reconstructed. It has the shape of a hexagonal hill with a diameter of 60 meters and a height of seven meters above the moat, as well as a watchtower ("Chartaque").

A forest glass center uses original and reproduced exhibits to illustrate manufacturing processes for everyday objects and jewelry. Century in Gersbach, but also in other places in the Black Forest were common.

The art and sculpture path with more than 20 iron-stone sculptures by the artist Wolfgang Gerstner opened on October 26, 2008. Some sculptures show parts of the history of the place.

The Bear Museum in Gersbach is a private collection with more than 500 teddy bears.

Somewhat hidden is the 7 meter high Gersbach waterfall of the Gersbach. In the last section of the run near Gersbach-Au it is called Brandbach and mainly reaches the Wehra as a torrent in the Wehra Gorge, which is up to 400 meters deep.

Lived customs are the disc fire ("Schiiebefüür"), egg jumping on Easter Sunday, raising the maypole and pranks on the corn on Walpurgis Night .

The annual pasture festival (formerly pasture drive festival) of the Fleischdirektvermarktung Bergland e. V. and producer association Gersbach-Wiesental is visited by 1,500 to 5,000 people every year. The festival includes a farmers' market for regional products, an animal show, a vintage car show, children's games and presentations of customs. Older people from Gersbach sometimes wear the traditional costume of the Markgräflerland on the festive day . During one of these festivals, an episode of the television series " The Fallers " was filmed in Gersbach.

The regular cheese and wine tasting of the Chäs-Chuchi Gersbach has developed from an event for tourists to an event also used by associations.

From 2002 to 2004, Gersbach took part in the 21st competition, Our village should be more beautiful - our village has a future , as the most successful of 4708 villages . Of 188 villages in Baden-Württemberg that took part in the state decision, Gersbach was rated the best in 2003 and was awarded the state's gold medal . With the highest number of points achieved so far at federal level (98 out of 100), Gersbach took first place among 36 places in 2004. According to the evaluation committee, Gersbach almost completely fulfilled the catalog of criteria for the competition. With the award of the gold medal in January 2005 in Berlin , Gersbach became "Bundesgolddorf".

In January 2007 Gersbach applied on request to the European competition Entente Florale Europe with 21,000 participating municipalities from twelve European countries. The jury visited Gersbach on July 15, 2007 and, on the occasion of the award of the gold medal in Harrogate, particularly emphasized the long-term and comprehensive development concept: "Gersbach is a small town with 700 inhabitants and is located in the southern Black Forest: local club life plays a major role here The village is characterized by agriculture, tourism and local businesses. The landscape is very varied: there are open pastures and meadows, unspoilt forests and vantage points with a view of the Swiss Alps. Hiking trails and a mountain bike network, toboggan slopes, ski slopes and cross-country ski trails invite hikers , Cyclists, riders and winter sports enthusiasts to get to know the region. Gersbach has developed the concept 'village in one piece', which consists of 20 different projects, for example: milk processing, cattle trail, bison enclosure, information pavilion, baroque hill, forest glass center. Some of these projects are Europe projects kte. The jury awarded a gold medal for the long-term and sustainable commitment. Gersbach can thus call itself a “gold village” on a national and European level.

Districts of the city of Schopfheim

Gold villages of the federal competition in the district of Lörrach