Henry the Lion in Iron 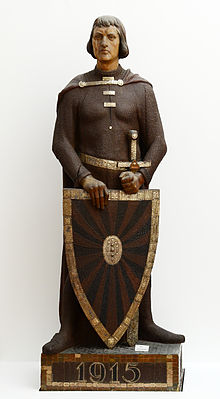 "Henry the Lion in Iron"

Inauguration of the "Iron Heinrich" on December 5, 1915 in front of Braunschweig Castle. 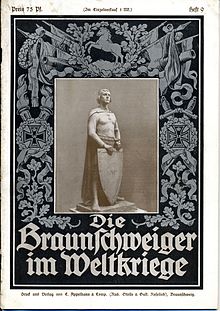 Image of the clay model on the cover of the propaganda newspaper Die Braunschweiger in the World War .

Inside of a leaflet for a donation of 50.00 marks from the committee for the listing "Henry the Lion in Iron" .

Heinrich the Lion in Iron , also known as Iron Heinrich , is a 3.90 m high nail figure made of African white wood, which was created during a so-called war nailing in Braunschweig during the First World War .

Very soon after the beginning of the First World War , the patriotic custom arose in Austria-Hungary to include the civilian population on the home front in the support of the fighting troops by giving them the opportunity to make their own contribution to the war through monetary donations and thus also the fight - and to increase the civil population's willingness to suffer. Such expressions of solidarity with the fighting troops or the relatives of the fallen soldiers soon found supporters in the German Empire .

Figures or objects made of wood, which represented local or national symbols , were set up in prominent, mostly historical locations . The population had the opportunity to drive nails into them for a more or less high donation (mostly made of iron , occasionally also made of brass , silver or gold ). The amounts collected in this way were usually donated to charitable purposes and thus relieved the state budget, which was strained by the war . The first war nailing - also known as school nailing in schools - took place at the end of 1914.

"Henry the Lion in Iron"

On the initiative of the Brunswick school inspector A. Sattler and chaired by the Brunswick Minister Friedrich Boden , the “Committee for the installation of Heinrich the Lion in Iron” was set up to decide on the form and type of a statue worthy of the occasion. The design of the figure goes back to the sculptor Arnold Kramer , who first made a clay model for it. According to his plans, the sculptors Wilhelm Lüddeckens and Hans Bethmann worked on a trunk that was originally four meters high, one meter wide and weighing 63 hundred pounds . The finished statue finally had a height of 3.50 m (3.90 m with plinth ). It stands in the tradition of the Roland figures of the late Middle Ages as well as the Bismarck monument, inaugurated in Hamburg in 1906 .

The "Iron Heinrich" depicts the Welf Duke Heinrich the Lion , standing with his legs apart and firmly standing, clearly ready to fight, in chain armor with sword and shield . The years 1914, 1915 and 1916 are on the base of the statue.

Although the figure is in the tradition of the Rolande, it actually corresponded to the patriotic propaganda prevailing during the World War ; the veneration of Henry the Lion in the city and duchy of Braunschweig was to be instrumentalized for the purpose of maintaining and strengthening the morale of the entire country.

The leaflet for the "Installation of Henry the Lion in Iron" describes the purpose of the nail figure or the nailing:

"It is supposed to bear witness to the heroic deeds of German men in the mighty world war, the fallen heroes to honor, the bereaved for consolation, the war invalids for support, the sacrifice of the population of Braunschweig for glory and the youth for emulation."

The larger-than-life statue was inaugurated on December 5, 1915 on the square in front of the Braunschweig Palace under a presentation building with a canopy that was specially designed by City Planning Officer Max Osterloh for public installation . The canopy was headed with the motto “Braunschweig's thanks to his heroic sons”. Karl August von Schwartz , the last court and cathedral preacher of the nearby Braunschweig Cathedral , gave a propagandistic patriotic speech in which he stylized Heinrich the Lion as the defender of Germanism against “ Slavicism in the East” and the time and circumstances of the First World War equate to those of the " Iron Age " and thus the wars of liberation against Napoleon Bonaparte .

Nails were available in four different variants and thus price categories, in order to give the population the opportunity to donate according to the respective financial possibilities or according to " patriotic sentiments ". Iron nails were the cheapest at 50 pfennigs , followed by those made of brass, silver and finally the most expensive made of gold. The prices per nail were between 50 pfennigs and 300 marks, depending on the material selected and the position and size selected . Depending on the amount, each donor received either a "donation receipt" or an elaborately designed folding card with a photo of the Heinrich figure and a handwritten entry of the donated amount for their donation. First-time donors - especially representatives of the state and local greats - were listed by name in the newspapers published in the city and duchy. The list of all those who hammered a nail is still in the form of a memorial book in the Braunschweigisches Landesmuseum. Many of the larger nails bear the name of the donor (individuals, companies, associations, schools, etc.). In the center of the shield is the nail of the last Guelph Duke of Braunschweig, Ernst August von Braunschweig-Lüneburg . Contrary to what was expected, the donations only came in to a small extent. Only the nobility, the military and the wealthy bourgeoisie regarded a donation as a patriotic duty. As the war progressed and the social and economic problems it worsened, fewer and fewer people donated, so that the state increasingly relied on school nailing .

The "nail donations" collected in Braunschweig went to various humanitarian institutions that looked after Braunschweig soldiers at the front and in hospitals in Braunschweig and the surrounding area, such as the Red Cross , the local " love gifts committee ", Braunschweig men and women Women's clubs or disabled people .

Already at the time of installation it was decided that after the - victorious - end of the war the figure should be brought to the "Vaterländisches Museum" in the Aegidienkirche , which at that time served as an exhibition room in order to present it to posterity. In fact, this did not happen until February 1919, after the - lost - war and the November Revolution in Braunschweig . After the end of the Second World War , the figure was exhibited in the adjoining Pauliner Choir from the mid-1950s , from where it was brought to today's Braunschweigisches Landesmuseum on Burgplatz in 1987 , where it is still located today.

Cover of the Golden Book . 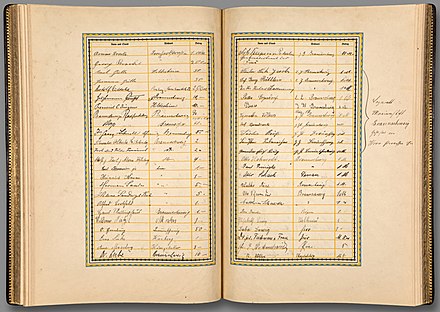 Double page u. a. with soldiers from the Marienstift hospital

Together with the statue of Henry the Lion, a heavy, oversized tome bound in multicolored leather with gold applications was designed. On the cover, the title Das Goldene Buch is emblazoned in large golden letters with ornate majuscules , underneath in a circular, also golden medallion, the laurel-wreathed image of the Brunswick lion on the Burgplatz and underneath a quote from Friedrich Schiller's Wilhelm Tell : We are one People and united we want to act! from the Rütli oath scene.

The leather strap contains the handwritten entries of hundreds of people and groups of people who hammered nails into the statue for money during the war years. In addition to residents of the city and duchy of Braunschweig, civil servants, the military and " dignitaries ", above all the Braunschweig Duke Ernst August, who is "in the field", can be found. But also the names of various clubs, associations and guilds as well as entire school classes that had been sent as a group to drive nails, as well as the names of numerous soldiers and officers of the 17 and 92 regiments based in Braunschweig . In addition, the book also contains the names of many soldiers who were in Braunschweig hospitals and, last but not least, those of travelers and tourists.

The format and presentation of the name lists are based on medieval manuscripts . The name table is in blue and yellow, the colors of the Duchy of Braunschweig, and has the three columns "Name and Status ", "Place of Residence" and "Amount [paid for the nail]"

Like “Henry the Lion in Iron”, “The Golden Book” is now in the Braunschweigisches Landesmuseum.