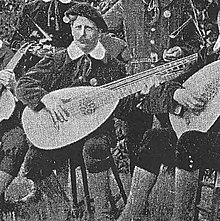 Herman Wirth , also Herman Wirth Roeper Bosch , Herman Felix Wirth , Hermann Wirth (* May 6, 1885 in Utrecht ; † February 16, 1981 in Kusel ) was a Dutch humanities scholar who worked mainly in Germany and was an important National Socialist functionary and co-founder of the German Ahnenerbe Research Association the SS .

Hermann Wirth studied Dutch philology , German literature , history and musicology and received his doctorate in 1910 with the thesis The Downfall of the Dutch Folk Song . He then taught Dutch philology at the University of Bern . During the First World War , Wirth supported the Flemish separatists in German-occupied Belgium and volunteered for the front. He was appointed titular professor in 1916 by the German Kaiser Wilhelm II . After he had founded a national organization in the Netherlands in 1919 , August 1922 was given an honorary professorship in Marburg . After working as a grammar school teacher in Sneek (Netherlands) for some time , Wirth settled in Marburg in February 1924 and joined the NSDAP in 1925 , which he initially left the next year without dissociating himself from National Socialism; so he propagated the swastika as a "species-specific symbol of salvation".

His work on the “prehistory of the Atlantic-Nordic race”, which he wrote during this period, was very well received in national circles. In 1932 the National Socialist state government in Mecklenburg-Schwerin set up the Research Institute for Spiritual History in Bad Doberan for Wirth , which was popular among experts as well as National Socialists Was extremely controversial among intellectuals. After the NSDAP came to power , he rejoined the NSDAP (as well as the SS, membership number 258.776) in 1934. Adolf Hitler reassigned him to his old membership number (20.151).

In the early days of the Nazi regime between 1933 and 1935, the major churches of both denominations were intensely preoccupied with an ideological confrontation with Neopaganism . The corresponding statements could still appear in book form. Tendencies towards German-Völkisch Neopaganism could be found among other things in the Deutschkirche , a predecessor organization of the German Christians, as well as in a radical form in the Tannenbergbund of the Ludendorff couple. Hermann Wirth was one of those who tried to reinterpret Christianity in the folkish sense and who propagated a Nordic origin of the original monotheism. The German Faith Movement represented a collection movement, which comprised numerous neo-pagan and free religious groups, which, founded in 1933, strove for corporate status. In addition to Jakob Wilhelm Hauer , Wirth and, until 1934, Ernst Bergmann were among the leading members . This group also included numerous (formerly communist) free thinkers.

In 1935 he was one of the founders of the SS “Research Foundation of German Ahnenerbe” project, which was sponsored by Heinrich Himmler and Richard Walther Darré , from which he retired in 1938 due to ideological differences with Himmler, who did not share Wirth's ideas about matriarchy . Since Wirth's research, which was not only academically hardly recognized, did not fit in with the still rather heterogeneous NS organizations, he was ousted from the Ahnenerbe in 1938, but received research grants until 1944/45. After the end of National Socialism, Wirth passed this off as persecution.

Interned in 1945 by the US troops for two years, he moved to Sweden for a few years and returned to Marburg in 1954, where he lived as a private scholar. Although he continued to defend National Socialist Germany ideologically, Wirth's teachings on “primitive cultures” found resonance in the developing alternative scene and in support groups for the North American natives in the 1970s. On the mediation of the Wirth student and SPD member Roland Häke , Willy Brandt visited Wirth in Marburg in 1979, and the Rhineland-Palatinate state government temporarily supported a project to set up a museum with Wirth's ethnographic collection in the tithe barn of Lichtenberg Castle . In addition, Wirth supporters tried to found an institute for community studies . Wirth's ideas are still followed today.

In addition to the cultural philosopher Otfried Eberz , the racist Ludwig Ferdinand Clauss and Bernhard Kummer , Herman Wirth became an important reference author for the issue of mother rights in writings by women, especially ethnic women of the 1920s and 30s, but also to parts of the spiritual women's movement today.

Herman Wirth was of the opinion that in the Neolithic Age the Germanic peoples lived in a state of matriarchy in harmony with nature. According to Wirth, it is necessary to return to this state of affairs, which presupposes the "purebred" of the Aryans . Through the enforcement of the patriarchal army king and priesthood and reinforced with the emergence of Christianity (for Wirth, Jewish and “alien”), this paradisiacal original state was destroyed. National Socialism was an attempt to bring back the "native and native, down-to-earth tradition". In his theories, Wirth generally argued openly racist , anti-Semitic and social Darwinist . So he demanded the annihilation of people who are regarded as "unworthy of life" and "perky inferior".

In the ancestral heritage, Wirth and Himmler combined, according to Michael Kater, "making people aware and recreating supposed values ​​from the long-gone world of the Germanic ancestors and making the 'heritage' gained in this way usable on the practical-ideological level of National Socialism ".

Wirth's historical and ethnographic theses were and are unanimously rejected by the scientific community and cannot be substantiated by any sources. The Ura Linda Chronicle , which Wirth used as evidence for his theses and was first published in 1872 - a chronicle supposedly written in Old Frisian - is not an ancient text, but a contemporary forgery.

Ludwig Roselius - close to the folk-Nordic ideas - was inspired by Wirth's book Rise of Humanity to build a building in Bremen's Böttcherstraße , the Atlantis House designed by Bernhard Hoetger in 1930/31 .

The association “Ur-Europa” emerged from the “Society for European Urgemeinschaftskunde / Herman Wirth Gesellschaft” founded in June 1957 with Wirth's participation. Ideologically he refers to Wirth and his construction of a higher-quality, Nordic-Germanic race. Wirth's ideas are received in large parts of the neo-pagan scene, sometimes rejected as " ethnic esotericism ".

(see the detailed list of publications on the Dutch Wikipedia )