The Basel Historical Museum in the Barfüsserkirche in September 2010

The Basel Historical Museum (HMB) is one of the largest and most important museums of its kind in Switzerland and is one of the five state museums in Basel . The main part of the collection is exhibited in the Barfüsserkirche in the center of the city of Basel . From June 1, 2017 to August 2020, Marc Fehlmann, who holds a doctorate in art history, was director.

The museum houses the most comprehensive cultural and historical collection on the Upper Rhine , and its exhibition area is around 6,200 m² .

The museum is an independent institution , its sponsor is the canton of Basel-Stadt . It emerged in 1894 from the Medieval Collection created in 1856 . The origins of it, however, as the Kunstmuseum Basel , in the bourgeois art chamber of Amerbach family in the 16th century. 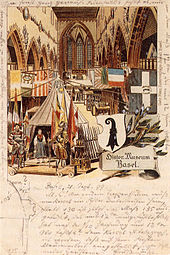 Interior view on a postcard from 1894

The mendicant order of the Franciscans built the late Gothic Barfüsserkirche in 1298 . But when the Franciscans gave up the church as a result of the Reformation of 1529, it was gradually profaned and used for other purposes. Since the middle of the 19th century, the former church has even served as a salt and goods store . When Basel's candidacy for the location of a Swiss National Museum failed, the Historical Museum was established in the Barfüsserkirche in 1894. In order to gain floor space, galleries were moved into the aisles . Between 1975 and 1981, the museum had to be restored because of the salt residue that was still in effect and the collection was reorganized. The side galleries were torn out and the church interior was resacralized . In addition, the museum items on display were reduced and some of them relocated to the newly created basement. 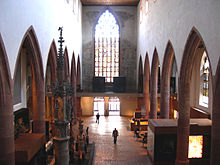 Adam and Eve by Hans Wydyz

The exhibition in the Barfüsserkirche shows evidence of the art of handicrafts and everyday culture . The focus is on the Middle Ages and the Renaissance up to the Baroque period . It offers an insight into the history of the city of Basel and that of the Upper Rhine region.

The house to the cherry orchard

Staircase of the house to the cherry orchard

The house in the cherry orchard was built between 1777 and 1780 for the "Bändelherren" ( silk ribbon manufacturer ) and Colonel Johann Rudolf Burckhardt . The house, whose architect Ulrich Büchel was, is considered to be the most elegant bourgeois palace in Basel. After various changes of ownership, the house was set up as a residential museum in 1951, connected to the neighboring house, the small cherry orchard.

Half of the fifty exhibition rooms are dedicated to bourgeois living spaces in Basel from the 18th and 19th centuries. There are also important specialist collections.

Especially worth seeing are: 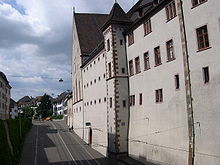 Lohnhof am Kohlenberg with the music museum in the cell wing

Foyer of the music museum

In the city center on the Barfüsserplatz, opposite the Barfüsserkirche, is the complex of medieval canons pen St. Leonhard . From 1669 the wage Men (head over the there were construction ) located, which is why the complex Lohnhof means. From 1835 to 1995 the buildings served as a remand prison . This required major renovations and extensions, including from 1852 to 1855 and 1897. After the prison was abolished, the Lohnhof was converted into apartments , a hotel and the music museum between 1996 and 2000 . The music museum was opened in 2000. It occupies the former cell wing .

The world of instruments can be experienced through a multimedia information system.

In 2017, the museum was accused of stiff visitor numbers. Those people who only visited the café or even only entered the church were counted as visitors. Director Fehlmann said: "We no longer count the movements of people that have been recorded with a motion detector for over ten years." As a result, a decrease in the numbers of around two thirds was estimated.

As of 2018, the museum's climate and safety conditions no longer meet international standards. Therefore, the museum had to outsource exhibitions that place high demands on the exhibits. Director Fehlmann assured that work would be done to eliminate these disadvantages.