The Isle of Purbeck is a peninsula located in the southeast corner of the county of Dorset , on the south coast of England . It has an area of ​​approximately 60 square miles. The peninsula is bounded to the south and east by the English Channel and to the north by the swampy areas of the River Frome and Poole Harbor . The western border runs south from the village of West Holme to the English Channel at Worbarrow Bay . 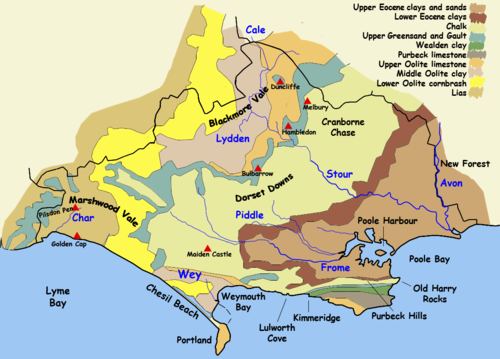 The geology of the peninsula is very complex. The Isle of Purbeck has two coasts, which are geologically simple along the south coast, but very complex along the east coast.

To the south, where the land rises to the sea, are several parallel stratigraphic layers of the Jura, Portland, and Purbeck. The rock is a sedimentary rock that was formed either in the late Jurassic period , in the ( Kimmeridgian and Tithonian ) or in the early Cretaceous ( Berriasian ) period. Masses of petrified dead plants and animals with limestone structures were deposited in this limestone deposit. The deposits in the Purbeck stage took place in sea bays alternating between salt and fresh water about 155 to 141 million years ago. The rocks and southern headland of Peveril Point and Durlston Bay to the west are made of slate, as well as Portland limestone , Purbeck stone, and Purbeck marble . Purbeck marble is a limestone in geology , as this limestone was not metamorphically impressed. The Isle of Purbeck has many historic quarries along the cliffs to the south. In the quarries of the Purbeckstein, historically significant building blocks were extracted, which were built into significant historical buildings in southern England. The headland of St Alban's Head forms the southernmost point of the Purbeck peninsula. St Alban Head is an extension of the Portland and the overlying rock occurrence of the Purbeck marble.

In contrast, in the northern part of the peninsula, where the land slopes down to the sea, clay (Barton Clay) was formed in the Eocene , underneath there are significant deposits of Purbeck Ball Clay . Under Swana Bay , as well as in Swanage Valley, there is a strip of Wheldon Clay that extends west to Worbarrow Bay . The main ball clay deposits were in the area between Corfe Castle and Wareham . Furzebrook, with its clay deposits, became the center of the local brick industry .

The geology of Worbarrow Bay and Mupe Bay is very similar and they are almost mirrored. The white chalk cliffs of Cow Corner appear like a knife edge here and extend from the hill down to Arish Mell Gap. Worbarrow Bay and Mupe Bay meet at Arish Mell. The bays originated in the Upper Cretaceous , Middle Cretaceous , Greensands , Gault , Wealden Beds , Purbeck and Portland. The rocks formed are complexly folded, with all sediments tilted vertically by about 45 to 60 degrees.

Swanage and Studland both have a long, east-facing bay and sandy beach. The northern headland, Ballard Down , is an area of ​​open chalk cliff. The chalk extends west along the Purbeck Hills to Lulworth and then north under the Dorset Downs and Cranborne Chase.

Yellow Ledge is a Kimmeridgium band of stones, at the east end of Hen Cliff . The term stratigraphic kimmeridgium was introduced by Jules Thurmann in 1832. It is the Latinized name of the village of Kimmeridge . The Kimmeridgium is a level of the Upper Jurassic (Malm). It is bordered at the bottom by the oxfordium and at the top by the tithonium .

Isle of Purbeck has the highest number of native and previously introduced wildflowers in the UK. This is mainly due to the varied geology.

The great spider ragwort ( Ophrys sphegodes ) is widespread. The stem is between 10 and 40 cm high. On the Isle of Purbeck, most species grow the kind of Ragwurzen ( Ophrys ). Almost 50,000 blooming grapes were counted in 2009. The end of April is the best time and the largest accumulation in the area west of Dancing Ledge . This orchid is also the logo of the "Dorset Wildlife Trust". Large cowslips meadows ( Primula veris and Primula elatior ) growing in Durlston Country Park .

At the beginning of May, wild garlic (Allium ursinum) grows in the forests , especially in King's Wood and Studland Forest, both owned by The National Trust . Around the same time, and later, the yellow crested horseshoe clover ( Hippocrepis comosa ) and the blue finials ( Polygala ) grow on the hill . At the end of May, yellow sorrel ( Anthyllis vulneraria ) grow in the fields near Old Harry Rocks . Blue mountain sand bells ( Jasione montana ) and pink and white beach bindweed ( Calystegia soldanella ) are two species that add color to the dunes at Studland during the months of June and July.

Heather ( Erica ), also called " heather " and known in England as "Dorset Heath", is abundant in July and August, particularly on and around Hartland moor and in the heather wetlands. "Bog Asphodel" also called Bastard Asphodel, in German leg breaker ( Narthecium ossifragum ) blooms yellow in early July. The lung gentian ( Gentiana pneumonanthe ) is less commonly found in similar areas from mid-August to mid-September.

A number of early Roman-British villa complexes have been discovered and explored on the Isle of Purbeck south of the Purbeck Hills at Bucknowle Farm .

A stretch of coast stretches from Orcombe Point near Exmouth in the west to the Isle of Purbeck in the east, which was the first natural landscape in England to be declared a World Heritage Site by UNESCO . The Jurassic Coast is one of the natural wonders of the world and is known for its fossils . Sights along the coast of the Isle of Purbeck (from west to east) include:

The heathland south of Poole Harbor and the swampy areas of the River Frome are the center of the local brick industry, but are also an Area of ​​Outstanding Natural Beauty . Sights in this area are: