Lautlingen is a district of Albstadt in the Zollernalbkreis in Baden-Württemberg . It is located on the Swabian Alb, about halfway between Stuttgart and Lake Constance .

The district is located on the old Roman road Sulz - Laiz , which ran right through the town. The Roman fort Lautlingen was located above today's core town , directly on the watershed between the Danube and the Rhine. The settlement was probably founded by Lutilo, an Alemannic clan leader.

Lautlingen was first mentioned in a document from the St. Gallen monastery as Lutilinga in 793 . Christianity found its way here early on , a gold leaf cross and an Alemannic cemetery in the Berken hallway bear witness to this.

In the Middle Ages , the Lords of Tierberg united the towns of Margrethausen and Lautlingen into one rule in the knightly canton of Neckar-Black Forest . As local lords they were successors, possibly even descendants of the lords of Luttelingen. From 1550 the place belonged to the lords of Westerstetten and Drackenstein . These too had inherited the local rule by marriage. The family, which also resided in Straßberg Castle , later became extinct in the male line, so in 1625 the taverns of Stauffenberg , counts since 1874, inherited the small knighthood. Famous family members include Marquard Sebastian Schenk von Stauffenberg (1686–1693 Prince-Bishop of Bamberg), Johann Franz Schenk von Stauffenberg (1704–1740 Bishop of Konstanz) and Franz Schenk von Stauffenberg (1871–1892 member of the Reichstag).

In 1805 the place fell to Württemberg through the Reichsdeputationshauptschluss . From then on, Lautlingen was subordinate to the Oberamt Balingen and thus belonged to the newly established Kingdom of Württemberg in 1806 and from 1919 to the people's state of the same name . In 1811 the two localities of Margrethausen and Lautlingen were finally separated by royal decree and separate local administrations were introduced. Lautlingen came to the district in 1934 and to the district of Balingen in 1938 . On May 1, 1972 Lautlingen was incorporated into Ebingen.

History of the castle 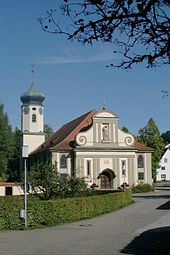 West facade of the parish church

On the Tierberg near Lautlingen are the remains of Altentierberg Castle, ancestral seat of the Tierbergers, and on a rock near the Tierberg farm there is a moat from Vogelfels Castle .

According to historical records, the Lords of Tierberg are said to have built or expanded a castle in the center of the village in the 15th century. This was already provided with corner towers and moats. According to estimates based on the structure of the towers and walls, this part of the ensemble has been preserved in the original to this day. When Hans Konrad von Tierberg was enfeoffed with the blood spell of Emperor Maximilian I (HRR) on August 27, 1518, the following quote appears: "... that he (Hans Konrad von Tierberg) at Lautlingen Castle ... has no high court." The Kaiser allows him the spell "to judge the blood there."

Between 1623 and 1625, i.e. at the time when the Lords of Westerstetten owned Lautlingen, shortly before it was taken over by the Stauffenbergers, the fortified castle with walls, moat and four corner towers was converted into a residence. The main building was rebuilt in the years 1842–1846 by the Excellency Franz Ludwig Schenk von Stauffenberg. In its place there was previously a half-timbered building, the ground floor of which was made of stone. There was a representative stair tower on the south side. The sober main building from 1842 with its hipped roof still characterizes the ensemble, which is a listed building.

The Lautlinger Schloss has been well preserved in its general structure despite many modifications. The walls consist of 60 - 80 cm thick quarry stone walls, which are provided with plaster. Inside there are massive, completely plastered half-timbered walls and wooden beam ceilings. The building measures 12.58 m in width and 21.91 m in length. Up to the eaves it is 11.57 m high, the total height is 16.37 m. The interior of the main building houses the internationally known music history collection Jehle . These premises were extensively renovated in 2005/06 and reopened on February 18, 2006 by Agriculture Minister Peter Hauk . On the first floor, the Stauffenberg room reminds of the previous owners. Since November 15, 2007, a Stauffenberg exhibition has been housed in the former premises of the local office, which was opened on the 100th birthday of Claus Schenk Graf von Stauffenberg . The theme of July 20, 1944 and the family history form the focus of the memorial.

In the summer of 1943, resistance fighters Berthold and Claus Schenk Graf von Stauffenberg thought about what Germany might look like after an attack on Hitler - this is how the “Lautlinger Guidelines” came about. After the assassination attempt on July 20, 1944 , the officers involved were killed by the Nazi thugs that same night . Every year since 1957, on July 20th, a memorial service for the resistance fighters against National Socialism has been held in front of the memorial chapel by the church. At the same time (since 2000) pupils from Albstadt schools have been commemorating the attack with project work.

History of the parish

In 1275 the church and parish of St. Johann Baptist with Pastor Heinrich von Tieringen were first mentioned in a tax register of the Bishop of Constance. After the unrest of the Thirty Years War , the parish church, which burned down, was rebuilt in 1670 by the local lord Wolfgang Friedrich Schenk von Stauffenberg and his wife Anna Barbara nee von Wernau . In 1725, the couple's sons expanded the little church and at the same time had the baroque tower that is still preserved today built. After the severe earthquake on November 16, 1911, the church had to be demolished. The new parish church, the first sacred reinforced concrete building in the Diocese of Rottenburg, was built from donations and a lottery . The tower could be preserved.

Ignaz Anton Demeter was pastor from 1802 to 1808 in the church, which was built in 1670 . He was elected second Archbishop of Freiburg on May 1, 1836. In addition to many achievements in the school system, he founded a theater company and, on May 7, 1803, the current Frohsinn band as a "music society".

Mining for iron ore was carried out in the area. The ore concretions are almost completely free of sulfur and phosphorus. In addition to the opencast mine to a depth of 30 meters, mining routes were also excavated. The sprouts pointed at the bottom were bought in Truchtelfingen, for example, and installed by Lautlinger miners on the Hörnle. Fidel Eppler from Lautlingen was supported as an ore supervisor . Independent miners mined at their own risk and were paid based on the amount of ore. In Lautlingen, an iron content of 30 percent was measured in the iron rye stone. Before the railway was built, over 1000 buckets of Bohner ore and iron rye stone, each weighing 120 kg, were transported to the iron and steel works in Ludwigstal near Tuttlingen .

Lautlingen has an extensive network of hiking trails that is looked after by the local department of the Swabian Alb Association . The Hossinger ladder has been certified as a premium hiking trail. Private Mountain hunters of the Enziandivision quartered in Meßstetten and Tailfingen built narrow paths on the eaves around Lautlingen in 1940/41 to accustom the pack animals to the altitude. A 1.7 kilometer long train of pack animals was on the move every day with loaded guns. In order to offer half-day tourists an attractive destination, hiking trails were signposted and advertised based on these paths. In the Zollernalbkreis and the Obere Donau Nature Park , there is a synchronized offer in rail transport on all routes on weekends . Railcars operated by the Hohenzollerische Landesbahn run here on Sundays and public holidays in order to make the local recreation area more attractive for tourism via Lautlinger Bahnhof.

A 400-meter-long floodlit lift is available in Lautlingen for winter sports.

Today the place is a modern part of the city of Albstadt with commercial areas and many leisure activities (hiking, adventure bathing, sport and entertainment).

The Zollernalbbahn , which runs from Tübingen via Hechingen , Balingen , Albstadt and Sigmaringen to Aulendorf, runs through Lautlingen . A new electrified crossing station will be required in Lautlingen for the hourly regular service to Stuttgart with a journey time of around 90 minutes, which was stipulated in the settlement of Stuttgart 21 . The required double-track entry of the Zollernalbbahn into the new line to S21 will be realized. An integral clock traffic requires large-scale considerations. Already in 1994, the timetable expert Mayer from the VCD district association Zollernalb suggested to the then district administrator of the Zollernalb district, Willi Fischer , that the planned crossing station Lautlingen / Hirnau / Badcap leisure pool should be generously dimensioned. Driveability tests are currently being carried out by DB Engineering for two million euros. The government of the state of Baden-Württemberg put the electrified regional light rail project on the rails in 2014, divided into sections.

In the area there is evidence that until 1835 goods were smuggled for traders across the customs border guarded by country hunters. The starting point and warehouse for nightly smuggling and theft are said to have been caves. In 1698 almost a ton of steel ingots was smuggled. In 1750 the donkey miller bought 130 bushels of spelled from Meßstetten and Hossingen from the Winterlinger Bannmühle and had them smuggled across the border into Switzerland. Since 1000 bushels were also bought and smuggled from Hechingen, there was a shortage of grain. Coffee smuggler Haux was hit by a bullet from the Meßstetter Landjäger in the Pfaffental on July 21, 1831 and died. The author Gerd Stiefel also describes smuggling in the novel Via Bologna . The starting point of the historical thriller is an actual murder in the winter of 1843. The perpetrator Jakob Egle used a path to escape from Lautlinger district to the Messstetter Smuggler's Cave ( 48 ° 11 ′ 18.68 ″  N , 8 ° 57 ′ 46.23 ″  O ) and fled across Europe. Smugglers also supplied evangelical believers in the underground with Bibles and evangelical writings. To minimize the risk of a discovery, the front pages have been removed. 48.188521 8.962843

Wikisource: Lautlingen  - in the description of the Oberamt Balingen from 1880