Bega's Ugandan father and Italian mother both came to Germany in the 1970s. As a teenager, he spent a few years in Miami . At the age of 16 he published there in 1991 under the pseudonym ART feat. Moe D. Cay the single I Need You! on Virgin Records .

After returning to Munich, he met the manager Goar Biesenkamp . In collaboration with the composer Christian Pletschacher alias "Zippy" and the producers Achim Kleist and Wolfgang von Webenau , the song Mambo No. 5 . The song is a cover of the song of the same name by Pérez Prado from 1952, to which Bega added text and a new chorus melody. During the production of the song, it was not certain whether the song should be released at all.

Mambo No. 5 became a world hit in the summer of 1999. In Germany he was number one in the single charts for eleven weeks and achieved double platinum status. This was followed by positions at the top of the charts in over 20 countries. B. France, the Netherlands, Great Britain, Australia, Canada, New Zealand, Finland, Norway and Sweden. The single climbed to number three on the US Billboard charts. In total, the single sold over eight million times worldwide. The associated album A Little Bit of Mambo also reached number one in numerous countries and number three and triple platinum in the USA. 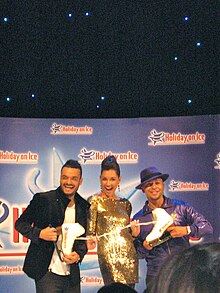 Giovanni Zarrella , Jana Ina and Lou Bega at a press conference for the show "Festival" by "Holiday on Ice"

His second single, I Got a Girl , reached the top 20 of the charts in five countries. The third single Tricky Tricky was # 18 on the Canadian and # 75 on the US Billboard charts. It followed at number eleven in the French charts with the title Mambo Mambo .

In 2000 Bega received the German music award ECHO in two categories and was nominated five times. He was also nominated for a Grammy and received the World Music Award in Cannes . Awards such as the “Blockbuster Entertainment Award” in Los Angeles, “Festival Bar” in Verona / Italy, the “ Amadeus Award ” in Vienna and third place at the “ Bunte - New Faces Award ” in Berlin followed.

Due to the great success of the first album and especially its hit single, Lou Bega is often referred to or perceived as a one-hit wonder , which annoys the musician: “Of course every other song besides Mambo No. 5 a failure. "

Lou Bega recorded the theme song and a music video for the computer game The Jungle Book by the Walt Disney Company .

In May 2010 the album Free Again was released , from which the singles Boyfriend and Sweet Like Cola were decoupled. They were able to occupy number 71 and 37 respectively in the German charts. The album A Little Bit of 80’s followed in 2013 , on which he covered pop hits, for example by Culture Club , Sade Adu and KC and the Sunshine Band .

Bega has also been working as a composer for the German dance project Groove Coverage since 2002 . So far he has participated in thirteen of the band's songs. His most successful composition for Groove Coverage was the song God Is a Girl from 2002. To date, the band has sold well over 13 million records worldwide.

His numerous concerts include a USA tour with Cher , where Bega appeared as a "special guest", and appearances in South America and the Indian subcontinent. Bega also appeared repeatedly for international companies, princes and at corporate events. He was booked by the Moroccan king for a birthday party. Lou Bega has appeared on many US TV shows and specials, including The Tonight Show , Ally McBeal , Motown Live, Jenny Jones and The Queen Latifah Show . In Wetten, dass ..? Lou Bega was the only artist who - with Mambo No. 5 - sang a song twice.

In 2010, the question of the rights of use to Mambo No. 5 on a legal dispute between Bega and the heiress of Perez Prado: Bega and his co-author Pletschacher unsuccessfully demanded the determination that they were jointly the sole authors of the hit.

Bega lives in his house in Berlin-Zehlendorf . He is an evangelical Christian. 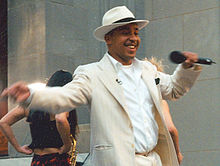 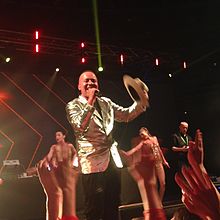