Academic logo of the MHH

Modern variant of the logo 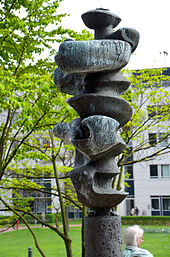 The plan to build a second medical faculty in Lower Saxony next to the University of Göttingen dates back to 1961. The founding rector of the Hannover Medical School was the Göttingen internist Rudolf Schoen (1961 to 1967). The first elected rector was the internist Fritz Hartmann . The Science Council recommended that seven new medical teaching facilities be set up in Germany.

As an academic and clinical institution, the motto In necessariis unitas, in dubiis libertas, in omnibus caritas was chosen, with which ideals and objectives should be outlined as an obligation and task. The words unitas libertas caritas can therefore also be found in the university's academic logo, on the rector's chain of office and in the seal. Like the high relief located in the clinical teaching building, it was designed by the sculptor Kurt Lehmann (1905–2000).

Less than four years after it was founded, teaching began in 1965 with 41 students enrolled. Due to the lack of space, the lessons initially took place in the Oststadt municipal hospital in Hanover. At the same time, the foundation stone was laid and new buildings were erected on an area of ​​around 400,000 square meters in the Roderbruch . By 1978, all important facilities, such as the central clinic, polyclinics, children's clinic, clinic for dental, oral and maxillofacial medicine, the library, various laboratory buildings, teaching buildings and lecture halls as well as supply and administration buildings, dormitories and residential buildings were built here. Only in the last few years was another building added, which since 2004 has housed the gynecological clinic and the “ Rudolf Pichlmayr ” transplant and research center. The Department of Plastic, Hand and Reconstructive Surgery moved from the Oststadt-Heidehaus Clinic to the MHH Clinic at the turn of the year 2006 .

From 1973 to 1997 the university operated the Hannover Research Reactor , a nuclear reactor for the production of radioactivity for nuclear medicine .

The university is set up as a campus university, with orthopedics in Annastift there is only one department in an external hospital.

The conversion into a foundation university was repeatedly up for discussion .

Entrance pylon next to the main entrance

Ever since it was founded, the concept of collaboration between teachers and students has been used “in small groups at the bedside”. In this approach, reinforced by the new licensing regulations for doctors, the MHH is sticking to the successful teaching concept with its new study model HannibaL (Hanoverian integrated, job- oriented and adaptive curriculum).

The first two M.Sc. programs mentioned as well as the PhD programs are located under the umbrella of the Hannover Biomedical Research School , which has been funded since 2006 as part of the federal government's Excellence Initiative.

Scientists from the MHH are currently involved in special research areas of the German Research Foundation (DFG):

The DFG supports the graduate colleges at the MHH

Federal Ministry of Education and Research

Traffic accident research is also located at the MHH .

The hospital of the Hannover Medical School is a hospital with a supraregional catchment area. The university hospital has 90 wards with 1,518 beds (2013). Further beds of the MHH are in other hospitals in Hanover. In 2013, 58,943 patients were treated as inpatients. 452,783 patients received outpatient care in the 35 polyclinics in 2013. The MHH is Germany's largest transplant center . In 2012, 423 transplants were performed here.

Pastoral clinic of the Evangelical Lutheran Church of Hanover

The pastoral clinic is an institution of the Evangelical Lutheran regional church of Hanover and a work area in the center for pastoral care of the regional church. The clinic offers basic, advanced and advanced training for pastors and church workers who work as pastors in communities, hospitals, prisons or diaconal and social institutions. The pastoral clinic cooperates closely with the MHH and other institutions, e.g. B. the Center for Health Ethics and Diaconal Hospitals. The management of the clinic is based in the service building of the Center for Pastoral Care at Blumhardtstrasse 2.

The MHH has the following partner universities: