The American Allen Woodring was Olympic champion ahead of his compatriot Charles Paddock . Bronze went to the Briton Harry Edward .

No athletes from Switzerland took part. Germany and Austria were excluded from the 1920 Olympic Games .

A total of twelve preliminary runs were carried out on August 19 (2:00 p.m. local time). The athletes who finished in the first two places qualified for the quarter-finals, which were held on the same day at 4 p.m. From these five races, too, the two first-placed winners each made it to the semifinals that took place the following day. In both preliminary rounds, the first three runners qualified for the final at 4 p.m. on the same day.

Note: The runners qualified for the next round are highlighted in light blue.

Only the times of the qualifiers and a few other times have survived.

René Tirard (FRA) is eliminated in the quarter-finals 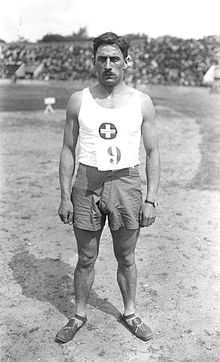 Even in the quarter-finals, the transmission of the times is not complete.

Charles Paddock also started his target jump over 200 meters . This time he was unsuccessful, however, because Allen Woodring was too strong and became Olympic champion before Paddock. Harry Edward, who had the fastest time in the intermediate runs with 22.0 s, won bronze.

Woodring's victory was the fourth US success in the fifth Olympic final in this discipline and also the third US double victory. Ten of the 15 medals awarded so far have been won by US starters.

Men's 200 meters at the Summer Olympics

Athletics disciplines at the 1920 Summer Olympics