Rudelzhausen is a municipality in the northern district of Freising in the administrative district of Upper Bavaria .

Rudelzhausen is located in the Danube-Isar hill country in the catchment area of ​​the Abens. 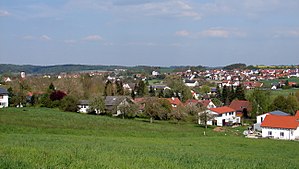 View of the Kirchdorf part of the municipality of Rudelzhausen 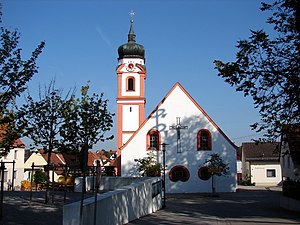 Rudelzhausen was first mentioned in a document in 778 as Hrodolfeshusir . The place belonged to the Landshut Rent Office and the Moosburg Regional Court of the Electorate of Bavaria . In the course of the administrative reforms in Bavaria, the municipality of Enzelhausen was created with the municipal edict of 1818 , to which the district of Rudelzhausen also belonged.

There are Catholic parishes in Kirchdorf and Tegernbach. Rudelzhausen belongs to the area of ​​responsibility of the Evangelical Lutheran parish of Mainburg.

Town hall of the community of Rudelzhausen

From 1978 to 1986 Lorenz Kronthaler was the first mayor of the newly merged municipality of Rudelzhausen (see incorporations). Josef Voichtleitner succeeded him until 2002. When Konrad Schickaneder (CSU) took office in 2002, he became the first full-time mayor of the Rudelzhausen community. In 2002 he prevailed in a runoff election for the mayor's office against Hans Neumaier (FW), in 2008 he ran unopposed. In the 2014 election he won against Hans Teibl (FW). In May 2020 he received the honorary title of former mayor. Michael Krumbucher (FW) has been the first mayor of the community of Rudelzhausen since May 1, 2020. He won a runoff against Robert Forster (CSU)

After the 2020 local elections, the municipal council will consist of 16 councilors:

In blue a silver horse's trunk, between the front legs a vertical, left-turned, golden bishop's staff. (managed since 1981)

In 1998, according to official statistics, there were eleven employees in the field of agriculture and forestry, 146 in the manufacturing sector and five in the trade and transport sector at the place of work. In other economic sectors 116 people were employed at the place of work subject to social security contributions. There were 1076 employees subject to social security contributions at the place of residence. There were three companies in manufacturing and twelve in construction. In addition, in 1999 there were 130 farms with an agriculturally used area of ​​2283 ha, of which 2015 ha were arable land and 260 ha were permanent green space.

The Hallertau local railway , which connected Rudelzhausen with Mainburg , Freising and Wolnzach , was shut down. The federal highway 301 leads through the village . Rudelzhausen has a bus connection to Freising and Mainburg with the MVV bus line 602.

In 1999 the following institutions existed:

Municipalities in the Freising district