The title of this article is ambiguous. Further meanings are listed under Sanshui (disambiguation) . 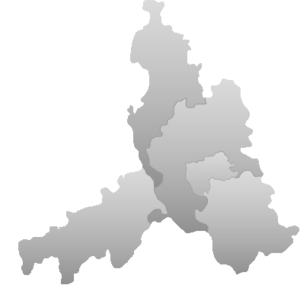 The district of Sanshui is located at the confluence of Bei Jiang ( 北江  - "north river, northern river") and Sui Jiang ( 綏江  /  绥江  - "Sui river, Sui river") into the Xi Jiang ( 西江  - "west river, western stream ”), which merges into the Pearl River a little below - near Guangzhou ; the name "Drei Gewässer" / "Drei Rüsse" is based on this geographical location.

The surface shape of the Sanshui District is flat in the southern and central parts, and the northern part is hilly. The climate is subtropical to tropical ; the average January temperature is 13 ° C, the average July temperature around 27 ° C. The annual rainfall is around 1,700 mm.

Ethnic breakdown of the population Sanshuis (2000)

Sanshui has resources of crude oil and natural gas , coal , oil shale , gypsum , limestone , marl , clay , quartz sand , rock salts . In addition, kapok , banyan and camphor trees as well as plants used in Chinese medicine grow in the forests of the Sanshui district . There are also wild animals such as wild boars or rabbits .

Within Guangdong, Sanshui Municipality is an important food producer. In addition to rice , corn , sugar cane , sweet potatoes , peanuts , fruits and vegetables are grown. The breeding of fish and pigs plays a particularly important role.

The manufacturing of building materials, textiles and food are of great importance for the industry in the district. The soft drink brand Jianlibao is produced in Sanshui.

The Sanshui District is part of the prefecture-level city of Foshan . On December 8, 2002, the Sanshui City was dissolved and incorporated into Foshan as a municipality. Sanshui is bordered to the north by Qingcheng District and Qingxin County (both Qingyuan City ), to the east by Huadu District ( Guangzhou City ) and Nanhai ( Foshan City ), to the south and southwest by Gaoming District (Foshan City) and to the west at the district Dinghu and the cities of Gaoyao and Sihui (all three part of the prefecture-level city Zhaoqing ).

The city district is divided into a street district and four large municipalities:

Two street districts and two large municipalities were dissolved in 2003 and integrated into others; these are:

Sanshui is on the railway line from Guangzhou heading west to Maoming . In addition, the south of the city district is crossed by the Guangzhou- Foshan - Kaiping motorway and the parallel national road 324. The north of the borough is less well connected in terms of traffic than the south, where the Xinan street district is located. The port on the west river , on which goods such as people can be transported in a north-south direction, is of great importance .

Sons and Daughters of Sanshuis