The Catholic parish church of St. Georg in Hockenheim , a town in the Rhein-Neckar district in northern Baden-Württemberg , was built in 1910/11 and is a nationally important Art Nouveau building .

South aisle with a cliff window

By 1900 a larger Catholic church had to be built. The plans were drawn up by the head of the archbishop's building office in Karlsruhe , Johannes Schroth . Schroth previously built churches in neo-Romanesque and neo-Gothic styles. The foundation stone was laid on Ascension Day 1910, a memorial plaque on the Marienkapelle commemorates this. The local construction management was the architect Karl Fischer from Odenheim . On Kirchweihtag , October 15, 1911 consecrated Archbishop Thomas Nörber the new church.

The church has a length of 50 m and a width of 30 m. The facade faces the main street and the viewer can only see it from a distance.

The gable roof at a height of 26 m is slightly hipped in the lower area of ​​the eaves . The 60 m high square tower in the northeast corner has rounded corners and a slight stepping of the tower spire.

The entrance facade on the northwest side with the structure of the large and small windows clearly shows style elements of Art Nouveau. Three equally large portals lead under a short vestibule first into a narrow vestibule and then into the church building. Small copper-clad doors on the sides of the protruding facade lead to the gallery .

On the central axis of the facade is a relief plastic that St. George is in the fight with the dragon. Above it is a representation of the Corpus Christi , also created by the sculptor Hermann Taglang .

The copper-clad portals are all provided with diamonds , an ornament that is repeated throughout the building.

Dome of the choir room, lamb with the four evangelist symbols 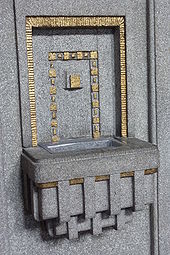 When entering the church, the visitor is below the protruding gallery and then enters the approximately 34 m long and 14 m wide light-flooded central nave . The aisles are much lower and narrower. The longitudinal barrel of the central nave is carried by five belt arches . The upper facade windows lead the light into the room, which is reflected by the opposite walls of the central nave, thereby increasing the brightness of the room. The darker side aisles with side entrances are groin-vaulted .

Above the choir , raised by seven steps, is the triumphal arch on ornamented square supports . At the height of the choir is the sacristy on the right and, symmetrically on the left, the Marienkapelle.

The contemporary furnishings of the church have been completely preserved and show how attempts were made in Art Nouveau art to create a unit in the sense of a total work of art .

The altar on closed stipes stands in front of a flat choir wall niche. On both sides of the tabernacle is a relief of a choir of angels with gold nimbs . The altar cross stands in the canopy on pillars . The sculptor Hermann Taglang created the sculptural design, including the depiction of St. Francis at the side altar. The apocalyptic lamb with the symbols of the four evangelists is painted on the dome of the choir room . The apostles Peter and Paul stand as full sculptures on consoles on both sides of the altar . The remaining ten apostles, represented with their attributes, stand on the pillars between the arcades . These larger-than-life sculptures are the work of the sculptor Emil Sutor from Karlsruhe and were made in the late 1930s.

Between the first and second arcades on the left, the pulpit stands on four pillars. The plaster reliefs represent the Sermon on the Mount and Pentecost .

A special aesthetic quality have the square stoup in stone and provided with golden squares. Here and on the walls, ceiling sections and pillars, the ornamental decoration is repeated in many variations, characteristic of the Art Nouveau period.

The organ was built in 1940 by the organ building company Michael Welte & Söhne (Freiburg) as a membrane shutter organ. The instrument has 46 registers on three manuals and a pedal . The actions are electro-pneumatic.