This is a directory of street names in the Hanseatic city of Stralsund .

Example: The A manda-Weber-ring, see A .

Named after the German composer Johann Sebastian Bach . This street is in the musicians' quarter . There is no relation to Stralsund.

The Baden street runs from the Ossenreyerstraße the harbor and ends at the road to the fish market . It is one of the first streets in Stralsund and was named platea bodonis in the 13th century after the Bode family who lived at the beginning of the street . This family and the other residents of the street must have been very wealthy merchants, as the magnificent town houses show. After the family died out in the 14th century, the Bodestrate became Badenstrasse with reference to the messengers (Baden in Low German). There is therefore no relation to the state of Baden .
The section between Ossenreyerstrasse and Kleinschmiedstrasse was still called kolemarket until the 15th century, after the fuel traders based here. From the 15th century on, this section was called Wendenmarkt after the butchers who sold inferior meat here. When the street names were reformed in 1869, the section was assigned to Badenstrasse.
The bathing gate, which once stood on the corner of the waterway, was demolished in 1877 by a council decision.

Mentioned for the first time in 1298, Badstüberstraße was named after the trade of Badstüber ( Badstöver in Low German ) or Bader . Members of this trade operated bathing rooms for the citizens; this was often combined with the serving of alcohol, hair cutting and occasionally with the practice of bloodletting . In the baths, however, was not only bathed; there is also evidence of commercial prostitution .

The street runs along the first Stralsund train station, built in 1863.
The road was laid out as a gravel path under the name Bahnhofsweg . In 1890 the now paved street was renamed Bahnhofstraße .

Today's Gentzkowstraße was called Bahnweg in the 1920s . Today the railway leads from Greifswalder Chaussee to Bahnhofstrasse.

Named after the dukes of Pommern-Barth-Rügen and Pommern-Wolgast , Barnim . In the 13th and 14th centuries, they mainly influenced the fortunes of the city by granting property rights.

Named after the town of Barth in Western Pomerania-Rügen . 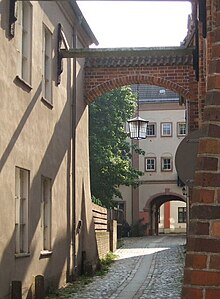 The Bechermacherstraße is first mentioned in a document in 1396.
It was named after the trade of cup makers (in Low German : Bekermaker ), small boats that were manufacturers of small vessels.
However, at that time only a small section of today's street, namely between Badenstrasse and Semlower Strasse , bore this name. The section between Semlower Straße and Fährstraße was called Hühnerstraße until the street name reform in 1869 .

Named after the composer Ludwig van Beethoven . This street is in the musicians' quarter . There is no relation to Stralsund.

Named after the nearby Heilgeistkirche . This belongs to the Heilgeisthospital .

Named after the city of Bergen on Rügen . In this settlement, streets were mainly named after places on the island of Rügen.

Named after the poet and writer Bertolt Brecht . There is no specific reference to Stralsund.

Bielkenhagen street was named after a family named Bileko who immigrated to Stralsund in the 14th century . Around 1300 she owned several properties on this street.
Street names that end in -hagen indicate streets that either ran alongside the city wall or led to it.
The section between Mönchstrasse and the courthouse was called Im Sieben Thören or Siebenthoren until the street name reform in 1869 . This name is first mentioned in 1554 . This section was probably named after the seven gates of the Eldena monastery courtyard .
The last beheading in Stralsund took place in the prison garden on April 21, 1855 .

Three Billroth s are important for Stralsund : In the Middle Ages, the two merchants Friedrich Martin Billroth and JC Billroth played an important role in Stralsund's merchants and thus for the city itself. However, the street was named after the surgeon and scientist Theodor Billroth , who lived in Bergen was born on Rügen . There is no relation to Stralsund.

Named after the city of Binz on Rügen . In this settlement, streets were mainly named after places on the island of Rügen.

Named after the native birch . In this part of the city, the streets were mostly named after native plants.

Named after the blue tower bastion .

In 1623 the Blidestrate became today's lead street , ignorant of the former meaning of the word Blide . These were centrifugal machines that were created in the Middle Ages . Stralsund owned 53 of these machines in 1278; For these, a magazine was built in Blidestrasse, first mentioned in 1307, to protect the expensive machines.

Böttcherstrasse, view of the maritime museum

Named after the here mostly settled in the Middle Ages trades of cooper , due to the important role of Stralsund as a Hanseatic city quite a large guild formed because almost all goods in drums and barrels, by the coopers have been (traded) were manufactured shipped.
The Böttcherstraße was first mentioned in a document as the name for the street from Katharinenkloster to Jacobikirche.
Böttcherstraße was still called Papenstraße until 1530 or, after the appearance of a second Papenstraße , Grosse Papenstraße . In 1530 it was renamed Böttcherstrasse .
The local branch of the SPD was founded in 1891 at Böttcherstraße 29 (demolished in 2005) .

Named after the town of Brandshagen between Stralsund and Greifswald , which can be reached this way.

Named after the city of Bremen . After the political and economic turnaround in the GDR, the residential area was mainly given the names of cities with which Stralsund was closely connected during the Hanseatic League .

Named after the German writer and astronomer Bruno Hans Bürgel . However, there is no direct connection to Stralsund.