Trofa is a city ​​in the Norte region , in northern Portugal . The city is counted in the metropolitan area of Porto .

Various finds prove a prehistoric settlement of the area. Worth mentioning are the 34 axes from the Bronze Age that were found in São Martinho de Bougado , the open tomb ( Mamoa ) near Trofa, the rock paintings near the village of Maganha, and the remains of the fortress from the Castro culture near Alvarelhos .

The oldest official mention of the district comes from a document from the year 979 and concerned the communities of Alvarelhos, São Cristóvão do Muro and Cedões at that time. For about 160 years, today's district was in the early districts of Maia , Vila do Conde , Santo Tirso and the first district of Trofa. In the 13th century the area was known as Terra da Maia before it was annexed to Porto in 1384 .

King D. Manuel I restored the district in 1527 and gave Trofa city rights. The district remained unchanged until the Liberal Revolution in 1822 . In 1835 it was incorporated into the Santo Tirso district as part of the expansion. In the further course of the 19th century, the entire area experienced an industrial development, also due to the improved connections through new roads and the arrival of the railroad in 1875 . From then on, the textile industry in particular ensured a significant increase in the number of inhabitants, but intensified agriculture also contributed to the steady development.

In 1984 Trofa was elevated to a small town ( Vila ) and in 1993 to a city ( Cidade ), before it finally became the seat of an independent district again in 1998 , when it was separated from the district of Santo Tirso.

The neighboring areas are (starting clockwise in the north): Vila Nova de Famalicão , Santo Tirso , Maia and Vila do Conde .

The following municipalities ( Freguesias ) are in the Trofa district:

Among the other clubs in the district is the Futebol Clube São Romão, founded in 1964 from the municipality of São Romão do Coronado. He competes in leagues of the Porto district association.

Regional train in the old station of Trofa

Trofa is on the Linha do Minho railway line , and a new train station was opened in 2010. On the Linha de Guimarães , which is partially exposed at Trofa , the continued light rail from Porto is to run in parts .

Initiatives come from the population calling for the planned extension of the Porto light rail ( Metro do Porto ) to Trofa to be implemented. A resumption of the expansion in 2014 has been announced.

So far, public transport has been operated by private regional bus routes under public concession. 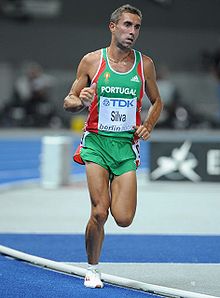 Rui Pedro Silva at the 2009 World Cup in Berlin

Municípios in the Porto district