Vila Nova de Famalicão (in everyday life mostly just Famalicão ) is a city in Portugal and it belongs to the Braga district , with 133,753 inhabitants (district, as of June 30, 2011). The renowned director Manoel de Oliveira made a documentary about the city in 1941, which he expressed his sympathy for several times.

Finds from the Castro culture prove a settlement before the arrival of the Romans .

In the course of his settlement policy, D.Sancho II re- founded the place in 1205 and gave it its first city rights. The place was as Fhamelicam to 1307 in the registers of the king D.Dinis out and dipped in 1527 for the first time as Vila Nova de Famyliquam on. He always belonged to Barcelos until Queen Maria II established the independent district of Vila Nova de Famalicão in 1835 . The place was raised to a small town ( Vila ) in 1841 .

The place experienced significant development spurts in the further course of the 19th century. The opening of the Porto to Braga road in 1851 and the arrival of the railroad in 1875 favored industrial and, subsequently, general development in the district. The opening of the Hospital da Misericórdia hospital in 1878 and the new town hall in 1881 are evidence of this. In 1863 , the writer Camilo Castelo Branco settled in the district, in the country house Quinta de S. Miguel in silk , where he shot himself in 1890 . Palace-like town houses such as the Palacete Barão da Trovisqueira were built. Several industrial companies settled down, including in 1886 the printing and publishing Minerva or 1892 , the watch factory regulators Dora . A variety of publishers, newspapers and magazines were founded, including Alvorada .

Vila Nova de Famalicão was elevated to a city (Cidade) in 1985 .

The football club FC Famalicão , founded in 1931, currently plays first-class (2019/2020 season) in the Primeira Liga . He plays his home games in the urban Estádio Municipal 22 de Junho . In the same group, the FC Famalicão meets three other clubs from the Famalicão district, so on

A large number of industrial companies are active in the district, in particular the textile industry, but also food processing and the like. a. The Portuguese meat producer Primor employs around 400 people here. The Reguladora , founded in 1892, is the oldest watch factory on the Iberian Peninsula and today the only remaining watch manufacturer in the country.

In Vila Nova de Famalicão there has been a factory of the German camera manufacturer Leica with around 600 employees since the first half of the 1970s .

At the Famalicão train station

The city ​​is integrated into the country's rail network via the Linha do Minho line , and also into the suburban train network of Porto via the former Linha da Póvoa . Since 2005, the route has been integrated as the red line B of Metro do Porto into the metro network of the greater Porto area.

The national road N14 has been developed into an expressway here and bypasses the city. The A7 and A3 highways intersect at Famalicão, each with its own exit to the city.

Famalicão is part of the national bus network of Rede Expressos .

Vila Nova de Famalicão is the seat of a district of the same name ( concelho ). The neighboring areas are (starting clockwise in the north): Braga , Guimarães , Santo Tirso , Trofa , Vila do Conde , Póvoa de Varzim and Barcelos . 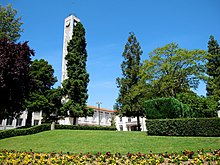 At the town hall ( Câmara Municipal ) of Famalicão

The following municipalities ( Freguesias ) are in the district of Vila Nova de Famalicão: 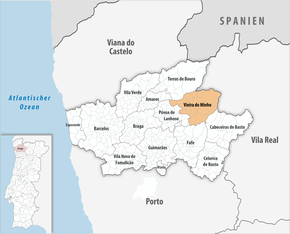 Municípios in the Braga district