The Columbusplatz subway station is a station of the Munich subway on the route of the U1 and U2 lines and , since December 12, 2011, the U7 reinforcement line, which only runs during rush hour.

The three tracks are unusual: two tracks share a platform and are used for the lines U1 and U2, which then run along one route for the route into the city, so that there are no downtimes in the tunnel in the event of delays . Another platform opens up the third track, on which both underground lines stop on their way out of town, in order to then continue on separate routes in the direction of Mangfallplatz and Messestadt Ost.

The underground station is located in Munich's Au district below Columbusstrasse on the right of the Isar and runs in a north-south direction. Its southern end at Columbusplatz is almost on the Munich railway southern ring of Deutsche Bahn .

Columbus Square and Columbus Street are named after Christopher Columbus , the discoverer of America .

The three-track underground station was opened on October 18, 1980 and serves as the southern branching station of the underground lines U1 and U2, which separate or meet again here. It was not until 1997 that the southern section of the U1 was opened that the third track could also be put into operation, but this was already implemented for this purpose when the station was built.

A special construction made of special parts is used for a switch at Columbusplatz. Due to a damaged switch guide rail, the U1 could not drive the section between Sendlinger Tor and Columbusplatz for about two weeks in June 2016, as such parts are not kept in stock as spare parts, but are specially ordered from the switch manufacturer. 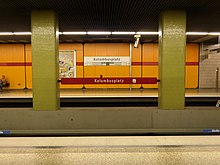 The appearance of the Columbusplatz underground station follows an overall design line developed by the urban underground department for the planning of the stations on the underground lines U8 (today: U2) and U1, which opened in 1980.

On the walls of the platform hall there are orange wall panels made of Eternit plates , the corners of which are rounded. The pillars were covered with green mosaic tiles. The floor was equipped with Isarkiesel artificial stones , the ceiling was clad with aluminum slats. The lighting is provided by three continuous light strips on the station ceiling. The furniture was in the line color of the U2 (then still U8) in carmine red .

Both platforms were retrofitted in 1987 with elevators to the surface, the elevator shafts of which were decorated with wall paintings on the inside .