Coat of arms of Gabon

The national coat of arms shows a golden shield on which a black ship is sailing across the sea . The sea is represented by the blue base of the shield .

Above this there are three golden circles in the green head of the shield .

The shield is placed over a golden trunk of a rooted okoumé tree. A banner with the French national motto winds beneath it:

Above the sign is also a banner with a Latin motto : 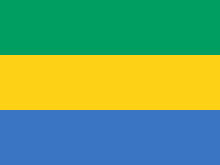 Coats of arms and seals of the states of Africa