Wolfsbach: the Äußere Nürnberger Straße ( B 2 and B 85 ) cuts through the place - on the left the former property No. 9 (princely customs house)

Wolfsbach is a formerly independent municipality and has been part of the city of Bayreuth since 1978 .

Wolfsbach in the late 19th century

Wolfsbach is located in the southeast of the city on a hill in the west of the Schlehenberg. In the north-south direction, the place is divided by the Äußere Nürnberger Straße, on which the federal highways 2 and 85 run. Federal Motorway 9 , which was built in this area in 1937 and expanded to six lanes between 2002 and 2006, runs directly to the west of the town .

The only flowing water in the village is the largely cased Thiergartenweihergraben, which flows into the Red Main near the Schlehenmühle .

The origin of the name is unclear. Field names such as Wolfsloh and Wolfsloch support the thesis that the presence of wolves was responsible for the name.

The Krugshof was first mentioned in a document in 1382

The inn is one of the margravial "Urhöfe"

Wolfsbach was a farming village until the 20th century. The place consisted of the town center with six properties , a forge , a mill (sloe mill) and the two individual farms Büttelshof or Püttelshof and Krugshof. The latter were first mentioned in a document in 1382. The so-called justices like baking fire law , brewing right , Mahlrecht , fully licensed and smiths were tied to property.

The first records of the residents can be found in the Imperial Tax Register of 1497. At first there were no free farmers. The farmers were in a feudal relationship , they were liable to pay taxes and had to do compulsory services to the feudal lord . The feudal farms were divided into the following units according to their size: whole courtyard, half courtyard , quarter courtyard, Selden , Trüpfhäuschen . According to the land register of 1499, the Kulmbach margrave owned four half farms , the forge and the mill. The noble family von Nanckenreuth owned the Krugshof, then called "Krueg", which consisted of two manors , the upper and the lower manor . In 1429 the lords of Kindsperg were still named as his feudal lords. It was not until the Napoleonic era that the peasants received ownership of their farms and lands after the abolition of feudalism. The farmers of small estates were often forced to do a sideline (weaver, tailor, shoemaker, innkeeper). Occasionally the properties were temporarily managed by tenant farmers.

During the Margrave's time, Wolfsbach was part of the Creußen office. Since 1564 the place belongs to the then founded parish of Sankt Johannis . In a parish register from 1568, all households are listed with their names and the number of people.

At the time of the margraves there was a customs collection station in Wolfsbach. Their building was sold by the Prussian state to a private person in 1797 . At that time, the Krugshof was a changing station for changing the carriage horses .

Around 1800 Wolfsbach became an independent municipality, to which Ottmannsreuth (with forester's house Cameroon) and Neuenreuth (with the Eimersmühle) belonged from then on. The last two places mentioned continued to parish to Creußen. In 1810 the place was listed in the rustic cadastre Oberkonnersreuth , instead of seven, eleven properties were counted. Between 1839 and 1871, many residents emigrated to the United States , but also to Austria , mainly because of economic hardship . In 1852 the Püttelshof burned down, the owner of which was the mayor of the community. The community files were a victim of flames. Approx. House numbers were introduced in 1850, the number of which had increased to thirteen in 1870. In 1878 the volunteer fire brigade was founded. A map dates from that year, on which the house numbers are recorded for the first time.

The Schlehenmühle building was rebuilt in 1902 and the mill was equipped with modern machines. In 1982 the Schlehenmühle was shut down. In house number 14, built around 1920, the post office and the public telephone were set up in addition to a carpenter's workshop . In 1929 a house was built in Wolfsbach for the first time only for residential purposes, in 1932 the community built a house for a local family who had become homeless.

In 1907, Mayor Keller started a new community chronicle covering the period from 1860 onwards. It ends - after the appointment of a National Socialist mayor - in 1934. In 1925, Wolfsbach received electricity from a Berlin company.

Around 1970 the main road was expanded and since then it has optically divided the place into two halves. The Eichengut residential area was built on the road in the direction of Thiergarten from around 1967. Soon afterwards, the Hirschbaumstrasse building area was designated and quickly developed. Around 1970 the Am Schmidholz settlement was built on the road to Schamelsberg, the name of which is reminiscent of the former forge. In 1996 the site of the former sawmill and a wood storage area were built on with terraced and semi-detached houses.

In 1971 the previously independent community Schamelsberg was added as a further district. As part of the community reform, the community of Wolfsbach was broken up in 1978. The place itself was incorporated into Bayreuth. Ottmansreuth and Neuenreuth came to Creußen, Schamelsberg to Emtmannsberg.

The Püttelshof property no longer exists; its areas were included in the youngest new building area Am Holzacker around 2000. The last remaining full-time farmer is the owner of the "Raps'n", a former margravial farm that was given house number 3 in the 19th century.

The "Raps'n" is the last full-time farming 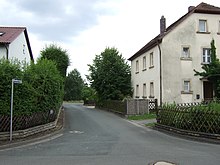 Haferweg, on the right the former post office in the former house No. 14

Up into the 20th century, the Wolfsbach children were taught in the “winter school”, where only the most basic skills were taught. The teacher was a layperson; B. in 1812 the local master shoemaker. In 1909 a schoolhouse with two classrooms was built in nearby Oberkonnersreuth, which the Wolfsbach children up to 8th grade attended. In 1960 they were assigned to the Sankt Johannis school district.

Wolfsbach is integrated into the network of the Greater Nuremberg Transport Association (VGN) by a bus line from Stadtwerke Bayreuth . The 310 buses run every hour from the ZOH in the city ​​center to the Wolfsbacher Straße stop and back. During rush hour there is an additional service with the 311 line.

Around 1960, the first commercial area was built on Wolfsbacher Strasse on property no. 6 (guest house). A sand-lime brick plant , the striking tower of which was retained after it was closed in 2008, and a car dealership were located there. To the north of Hirschbaumstrasse there was a sawmill and a timber shop until around 1985. A construction company relocated its administrative headquarters and storage space there in 2009.

In 1995 the first company gained a foothold in the new Wolfsbach-Nord industrial park, followed by the Deutsche Post mail center the following year . In addition to other companies, the “Competence Center New Materials” was added in 2002 on Gottlieb-Keim-Strasse. The research building of the Fraunhofer Center for High-Temperature Lightweight Construction was opened in 2015 .

Districts of the city of Bayreuth

* none of the official 74 districts