Aegean is a redirect to this article. Further meanings are listed under Aegean (disambiguation) .

The neighboring countries are Greece and Turkey . The Turkish region of Ege is named after the Aegean Sea. 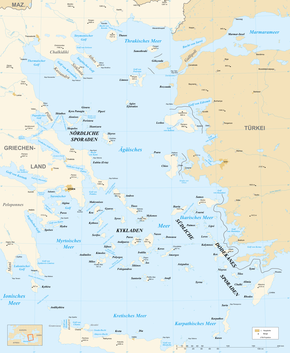 Map of the Aegean Sea 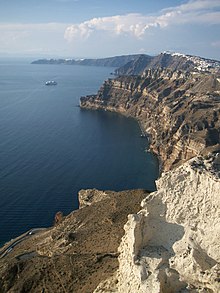 Rocky coast on the Greek island of Santorini

Coast of the Turkish city of Izmir

The Aegean is the northeastern sub-sea of ​​the Mediterranean. It is bordered to the west and north by mainland Greece and to the east by the coast of Turkey on Asia Minor . The Cretan arch of the islands with the islands of Kythira , Andikythira , Crete , Kasos , Karpathos and Rhodes , which connects the mountain ranges of the Peloponnese with the Taurus Mountains in southwestern Turkey, forms the southern end. Connection to the open Mediterranean Sea in the southeast ( Levant Sea ) and southwest ( Libyan Sea ) is via six straits:

The Aegean Sea does not border directly on the Ionian Sea , which is further southwest , but is separated from it by the Laconian Gulf , which still belongs to the Libyan Sea .

In the northeast there is a connection to the Black Sea via the Dardanelles , the Marmara Sea and the Bosphorus .

Parts of the sea

The name is derived from Aigeus , a mythical king of Athens. When his son Theseus moved to Crete in order to free Athens from the shameful tribute deliveries to Crete (seven young men and as many virgins every nine years) (→ Minotauros ), Theseus promised his father that on his return he would raise white instead of the usual black sails, if he survived. On his arrival in Crete, Theseus met Ariadne, the daughter of King Minos. He fell in love with her and they both devised a plan to defeat the Minotaur. Ariadne gave Theseus a ball of red wool with which he should find the way back from the labyrinth after defeating the Minotaur. The plan worked. Theseus wanted to take Ariadne to Athens to marry, but left her behind during a stay on Naxos because Dionysus had appeared to him in a dream and made claims on Ariadne. In his grief, Theseus forgot to set the white sails. When his father Aigeus saw the black sails on the horizon, he thought his son had not survived the mission. He then threw himself down the cliff into the sea, which is named after him to this day.

The prosaic reading is, however, that the name is derived from aix , genitive aigos ( αιξ, αιγός ), which means goat - ie " sea ​​of goats". Another interpretation is the derivation of both Aigaion and aix from the verb aïsso ( αΐσσω ), rushing up, rearing up, falling , moving quickly. The generally difficult sea of ​​the Greek inland sea is said to have given its name here.

The Aegean is considered to be the cradle of two great ancient cultures, the Minoan culture and that of ancient Greece . Later, Persians , Romans , Byzantines , Genoese , Venetians and Ottomans ruled the Aegean .

In ancient times , the Aegean islands, among which Crete , Evia ( Evia ) and - by some distance - Lesbos are the largest, were a source of cultural development, with particular emphasis on seafaring , trade and the transfer of knowledge. The combination of different cultures of the eastern Mediterranean region was favored by the geographical conditions.

The winds of the Aegean are distinguished by their persistence. When the sky is cloudless, from May to September there are often stormy northeastern, very dry and warm winds, which are called Etesia after the ancient Greek name . The modern Greek name is Meltemi (μελτέμι), derived from the Turkish Meltem . Accordingly, this form of the Mediterranean climate type is known as the Etesia climate . The cause of this constant air flow are the Azores high and the low heat over the Asian mainland . Gusts and down winds occur particularly on the coast of Asia Minor. The north wind of the Aegean is known as Boreas ( Greek βορηάς Vorias ). In the north of the Aegean, the wind called "Vardarīs" causes cold air to enter, which can be so intense that parts of the shallow bay of Thessaloniki freeze.

The Aegean Islands are usually divided into seven groups (the large island of Evia or Euboea is not included in any of these groups):

Only the two North Aegean islands Gökçeada (Greek Ἴμβρος Ímbros ) and Bozcaada (Greek Τένεδος Ténedos ) as well as a few islands directly off the Turkish coast belong politically to Turkey. All other islands belong to Greece.

On the Aegean east coast on the Turkish mainland some of the largest tributaries of the Aegean flow, including the Great Meander and the Small Meander . Other larger rivers flow into the Aegean from northern Greece, including Aliakmonas , Vardar , Struma , Nestos and Mariza .

Greco-Turkish disputes in the Aegean

There are a number of differences of opinion between Greece and Turkey over sovereignty over the Aegean Sea. The main points of contention are:

Turkey and Greece have been embroiled in a costly arms race for decades. In 1996 there was almost an armed conflict between the two NATO member countries. The conflict also concerns suspected oil reserves in the Aegean Sea. Furthermore, it is about the delimitation of the territorial waters between the two states: