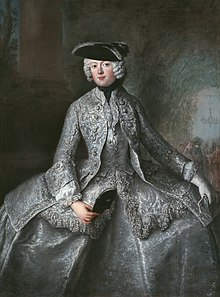 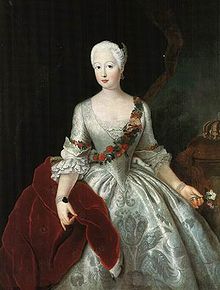 Amalie, also called Amélie according to French custom, was born on November 9, 1723 as the youngest daughter of King Friedrich Wilhelm I of Prussia and Sophie Dorothea of ​​Hanover . Allegedly, her mother should not have noticed the pregnancy until the end. She grew up with her sister Ulrike . She married the Swedish heir to the throne Adolph Friedrich , Duke of Holstein-Gottorp , who was actually intended for Amalie. However, the youngest sister of Frederick the Great did not want to convert from Calvinism to Lutheranism.

At her sister's wedding in July 1744, Amalie is said to have met the ensign Friedrich von der Trenck . Historiographically, it cannot be proven that this resulted in an intimate relationship; The basis for this story are above all the sometimes extremely boastful memoirs of Trenck. A recently discovered letter from Trenck from 1787 seems at least to indicate a great deal of familiarity between him and the princess. Trenck was arrested in 1745 and taken to Glatz Fortress in the County of Glatz without charge , presumably because Friedrich II suspected him of espionage contacts with his relative, the Pandur colonel Franz Freiherr von der Trenck , who was in Austrian service . Amalie never married and in the period that followed - so spread by court chroniclers - became more and more unbalanced, opinionated and maliciously sarcastic in her behavior.

Frederick the Great made Amalie abbess of the secular Quedlinburg monastery in 1756 in order to look after his unmarried sister appropriately. However, she rarely visited her pen, mostly in Berlin . She took part in court life especially during the Seven Years' War . In 1758, immediately after the battle of Hochkirch , she ventured to visit her brother's field camp.

Amalie went to Aachen and Spa several times for spa treatments because her health deteriorated significantly with increasing age. There she is said to have met the family of Freiherr von der Trenck. After the death of Friedrich, according to a rather ambiguous report by Dieudonné Thiébault , Amalie and Trenck, who have since gone blind, met for the last time in 1787. At this meeting she is said to have assured him that she would look after one of his daughters. A few weeks later, Amalie died. She was buried in the Hohenzollern crypt of the Berlin Cathedral .

Because of her idiosyncrasy and her facial features, Amalie was said to be the closest of all siblings to her royal brother. Through her activities and her commitment she was a confidante to him. Frederick therefore did not hesitate to repeatedly pay Amalie's debts. 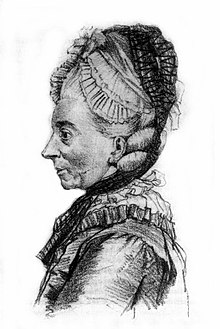 For a long time it had been assumed that the musically interested and gifted Amalia could only take harpsichord and piano lessons after his death at the age of 17 because of her father, the soldier king, who was hostile to music . However, recent research has shown that she and her sister Ulrike have been taking lessons from the court organist Gottlieb Hayne since 1734 at the latest. Amalia was in lively musical exchange with Crown Prince Friedrich during his time in Rheinsberg. She learned the flute , lute , organ , violin and composition . With her personal music teacher Johann Philipp Kirnberger , who worked for her from 1758 , she learned other composition techniques, such as counterpoint technique . Her own compositions included cantatas and chorales as well as marches .

Amalie, whose greatest role model was Johann Sebastian Bach , is known for her collections in the field of Bach research. The sheet music and manuscript collection, the so-called Amalienbibliothek - not to be confused with the Duchess Anna Amalia Library - is one of the rarities of the Berlin State Library today . The conductor Carl Friedrich Zelter reports on the collection jealously guarded by Amalie :

“Princess Amalie once let me see her music, but only the titles, through the glass of the cupboards. She took out a work, but kept it in her hands and only let me look inside. But then I reached out to be able to leaf through it, and she, frightened, made eyes like cartwheels. It was her brother's eyes. "

Amalie is in particular associated with a baroque organ that has largely been preserved to this day. In 1755 she had a representative house organ built for the Berlin City Palace by Johann Peter Migendt and Ernst Julius Marx . The organ was important enough to her that she had it moved to the Palais Unter den Linden in 1767 . After a few more conversions, the Amalien organ is now in the Church of the Good News in Berlin-Karlshorst . Even Carl Philipp Emanuel Bach mentions Amalie in his autobiography as his royal patroness (alongside Frederick the Great ), and he wrote organ sonatas for her.

In 1776, Amalie had Ernst Julius Marx build a second organ for the Vernezobre'sche Palais, which has not been preserved.

In 1767 Amalie acquired the Palais Unter den Linden 7 (old census). Amalie had the palace, which later became Palais Kurland , rebuilt in 1767 by Johann Boumann , with the assistance of his son Michael Philipp Boumann , in the Frederician Rococo style. After purchasing the Vernezobre'schen Palais, she only lived in the Palais Unter den Linden in winter. The art-loving Dorothea, Duchess of Courland, lived in the palace from 1805 . The Russian embassy is located on the site today .

When Amalie was in Berlin in the summer, she lived in the Vernezobre'sche Palais in Berlin's Wilhelmstrasse , which her brother had bought for her in 1772. The palace became known as Prince Albrecht's Palais from 1830 and later became part of the SS headquarters . The bombed-out and leveled area was a traffic training area after the Second World War . In 1987 the site was opened to the public as a Topography of Terror memorial , including the cellars that were still preserved. In May 2010 a new documentation center was opened.

Abbesses of the Quedlinburg Abbey