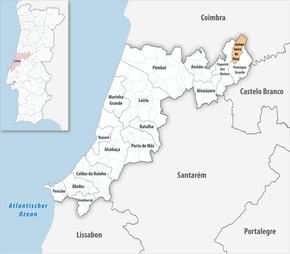 The exact origins of Castanheira de Pera are obscure. The historian Manuel Sousa Coutinho mentions a first hint in his História de São Domingo , according to which a village called Castanheira was founded before the 15th century. The first official mention of the place took place in 1467 in an arbitration verdict of King D. Afonso V on territorial regulations around Coentral . Castanheira de Pera belonged to the former municipality of Santa Maria de Pedrógão before it became an independent municipality in the Figueiró dos Vinhos district in 1502 . In 1691 the independent municipality of Coentral was also established.

Both communities belonged to the Pedrógão Grande district, which was created in 1895 or finally in 1899 . The municipality of Castanheira de Pera, which was previously characterized exclusively by agriculture and sheep breeding, was rich in pastures and water, and saw the settlement of its first wool processing factory in 1860 and has since developed increasingly industrially, not least through the energy generated by the Ribeira de Pera river . Since then, increasing efforts to make Castanheira de Pera the seat of its own district were intensified in 1913 with reference to steadily increasing tax revenues and population numbers. On July 4, 1914 , Castanheira de Pena finally became a district town, including the municipality of Coentral.

A legend written in 1629 tells of the princess Peralta, daughter of the ruler Arunce, who lived in 72 BC. . BC in the castle Castelo de Arouce in Lousã hiding from armed conflicts kept. At the urging of her lover Quintus Sertorius , a Roman general, she and her entourage moved to the town of Sertago. Her nurse Antigona died on the way. A tombstone was placed on her with the inscription "ANTÍGONA DE PERALTA AQUI FOI DA VIDA FALTA" (German for example: Antigona de Peralta went here forever, she is missing from life). The legend goes on to say that the goddess Venus was angry with the princess and therefore sent a lightning bolt that turned the entire entourage into the mountains and the princess into a mermaid who from then on lived in the spring water of the mountains. The wet nurse's tombstone also shattered and only the parts ANTIG ... A DE PER .. could be read, from which the name Castanheira de Pera originated in the legend.

Tourism, especially in the hiking and nature tourism with facilities of the turismo rural , has gained in importance after the decline of the traditional local wool processing and textile industry. Various historical industrial companies are now listed, including the Fábrica de Têxteis da Várzea, founded in 1874 and abandoned in 1997 . Since then, the nature of the mountains of the Serra da Lousã has been the main attraction in the district. Hiking trails are set up. The natural amusement park Prazilândia , which opened in 2003, should also be mentioned.

The district's architectural monuments include historic houses, fountains, former public buildings such as the town hall, schools and the post office, and a large number of sacred buildings . In addition, the historic town center is a listed building as a whole.

The district has several museums. In the Casa do Tempo , completed in 2001 by the architect Paulo Pedroso , a permanent exhibition on the press history of the place and changing exhibitions and cultural events with a regional focus can be visited. Also in 2001, a museum for olive oil production was opened in the former Lagar do Corgo oil mill . The Casa do Neveiro museum of local history has been open to visitors in Coentral since 1996 in the house where Manuel Agostinho Barreto, who later became Bishop of Funchal was born . In 1991 the municipal library, Biblioteca Municipal, moved to the house where Bissaya Barretos was born.

Since its foundation in 1914, the district consisted of only two parishes ( Freguesias ):

According to the law, after the municipal elections on September 29, 2013, the two municipalities were combined to form the new municipality of União das Freguesias de Castanheira de Pêra e Coentral , which is now congruent with the district.

In addition to the two main towns, there are a number of smaller towns in the municipality:

In the rural areas of Portugal, there has been a steadily increasing trend towards emigration to urban areas and abroad since the middle of the 20th century. In Castanheira de Pera, this trend was also intensified by the parallel closures of the textile factories.

The development company Ribeirapera SA is owned by the city and is particularly active in local economic development. It is based in the local industrial area Zona Industrial de Safrujo .

The district, which was originally characterized by grazing livestock and agriculture, developed increasingly industrially from the second half of the 19th century, especially in the textile industry. Industrial decline then set in in the 1980s. Since then, tourism has grown in importance.