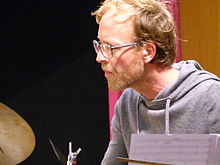 In addition to the drums, Thomé also learned to play the clarinet, piano and saxophone. From 1991 to 1997 he attended the Hogeschool voor de kunsten Arnhem , where he was a student of Joop van Erven and René Creemers . He has lived in Cologne since 1997 and works as a drummer, composer, arranger, producer and educator.

Already during his studies he was active in various bands and projects. He worked at the European Dance Development Center with the Italian dancer Paola Bartoletti and at WDR with the Auryn Quartet and played with Michael Moore , Achim Kaufmann , Christian Brockmeier , Sebastian Gramss ' Underkarl (feat. Nils Wogram ), Paul Heller , Nicolas Simion , Jorrit Dijkstra , Henning Sieverts and Hartmut Kracht .

From 1995 to 1997 he was active in the band ditties + to-do (with Sam Leigh-Brown , Tobias Lessnow , Andreas Wahl and Robert Dietermann ). In 1997 he was one of the founders of the Dittyland trio with Manfred Portugall and Stephan Meinberg , with whom he performed in Germany and the Netherlands. In 1998 he founded the septet tomatic 7 (with Sam Leigh-Brown, Gabriel Pérez , Stephan Meinberg, Manfred Portugall, Jürgen Friedrich and Sebastian Räther ), with which in 1999 the CD tomatic 7 "main stream" was released. With these bands he had successes at jazz festivals among others (1996-97) in Leipzig, in Breda (Netherlands), at the Nederlands Jazz Concours in Leuwaarden, 1999 in Getxo (Spain) and at the Europ` Jazz Contest in Hooeilaart.

The CD Hot Music was released in 1999 with the Schleisiek / Döring / Thomé trio (with Robert Schleisiek and Stefan Döring ) . In 2000 he worked with Celine Rudolph in the duo Rodolph-Thomé , in 2001 the CD Lühning was released with the band Lühning (with Inga Lühning , Mario Mammone and Helmuth Fass ) . In the same year he founded the quartet The HoHoHo Business with Ralph Beerkircher , Michael Thieke and Stephan Meinberg . In 2014 he presented the album Timbuktu with Hans Lüdemann and Aly Keïta in the Trio Ivoire .