Hambergite is a rarely occurring mineral from the mineral class of borates (formerly carbonates, nitrates and borates, see classification ). It crystallizes in the orthorhombic crystal system with the chemical composition Be 2 [OH | BO 3 ], so from a chemical point of view it is a beryllium borate with hydroxide ions as additional anions .

Hambergite usually develops tabular, prismatic or dipyramidal crystals with surfaces streaked along the c-axis, which have a glass-like sheen and can be up to 30 centimeters long. But it also occurs in the form of granular mineral aggregates . In its pure form, hambergite is colorless and transparent. However, due to multiple refraction due to lattice construction defects or polycrystalline formation, it can also appear white and, due to foreign admixtures, take on a gray-white to yellowish-white color, the transparency decreasing accordingly.

With a Mohs hardness of 7.5, hambergite is one of the hard minerals and, similar to the reference mineral quartz (7), is able to scratch window glass.

Hambergite was first discovered near Salbutangen near Helgeroa in Larvik , a municipality in the Norwegian province of Vestfold , and was described in 1890 by Waldemar Christofer Brøgger , who named it after the Swedish mineralogist, geographer and discoverer of the mineral Axel Hamberg (1863-1933).

In the meanwhile outdated, but still in use 8th edition of the mineral classification according to Strunz , the hambergite belonged to the common mineral class of "carbonates, nitrates and borates" and there to the division of "framework borates with [BO 2 ] 1− to [B 6 O 10 ] 2− ", where together with Rhodizit he created the" Hambergit-Rhodizit group "with the system no. V / L.02 and the other member Londonit .

The 9th edition of Strunz's mineral systematics , which has been in effect since 2001 and is used by the International Mineralogical Association (IMA), assigns hambergite to the newly defined class of "borates" and there into the department of "monoborates". This is further subdivided according to the type of borate complex and the possible presence of further anions, so that the mineral can be classified according to its composition in the subsection “BO 3 with additional anions; 1 (Δ) + OH etc. ”is to be found, where it is the only member of the unnamed group 6.AB.05 .

The systematics of minerals according to Dana , which is mainly used in the English-speaking world , assigns hambbergite to the class of "carbonates, nitrates and borates" and there in the category of "anhydrous borates with hydroxyl or halogen", like the outdated Strunz system. Here he is the only member of the unnamed group 01/25/01 within the sub-section “ Anhydrous borates with hydroxyl or halogen ”.

Hambergite is one of the framework borates whose crystal structure consists of planar [BO 3 ] 3− groups. The Be ions are tetrahedally surrounded ( coordinated ) by three O 2− ions of the [BO 3 ] groups and one (OH) - ion . The structure may therefore via the O 2- as a, the SiO 2 - modifications like, tetrahedral truss be considered. 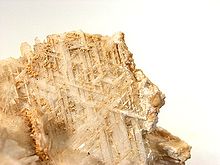 Hambergite forms in igneous rocks , preferably in granitic , rarely also in alkaline pegmatites . But it can also precipitate from hydrothermal solutions in pegmatite cavities. As Begleitminerale among others can beryl , Danburit , several Apatite , spodumene , zircon , fluorite , various minerals of the feldspar or quartz occur.

As a rare mineral formation, hambergite could only be detected at a few sites, whereby so far (as of 2013) around 70 sites are known. At its type locality Salbutangen near Helgeroa, hambergite was found in a dyke about 10 to 20 centimeters wide , consisting of nepheline - syenite - pegmatite . In addition, the mineral could be found at several sites in the Langesundsfjord in the municipality of Larvik and at some sites in the municipality of Porsgrunn in Norway.

The “Little Three Mine” near Ramona (California) , where tabular crystals of up to 20 centimeters in length came to light, is known for its extraordinary hamburgerite finds. After all, crystals up to 11 centimeters long were found near Imalo and Anjanabonoina in the Vakinankaratra region of Madagascar.

Other locations include Tasmania in Australia ; Hunan in the People's Republic of China ; the Tuscany in Italy ; the Northwest Territories of Canada ; Antananarivo in Madagascar ; the Shan State in Myanmar (Burma); at the Dudh Kosi and Seti river regions in Nepal ; Telemark Fylke and Vestfold in Norway ; the northern regions of Pakistan ; Eastern Siberia and the northern regions of Russia ; Tajikistan ; Bohemia and Moravia in the Czech Republic ; as well as California , Nevada and Wisconsin in the USA .

Clear stones of gem quality are mostly cut in facet shape and processed into gemstones . The level of awareness of Hambergite jewelry is still low. Colorless varieties can easily be confused with rock crystal , danburite , euclas , leuco garnet (rare colorless variety) and zircon .