Hardegg an der Thaya is a municipality with 1305 inhabitants (as of January 1, 2020) in the Hollabrunn district in Lower Austria . 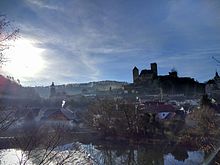 City of Hardegg with Hardegg Castle in winter, view from the Czech side

Hardegg Castle as seen from the Hardegger Blick ( Czech Republic )

The landscape around Hardegg belongs to the Waldviertel and belongs to the Weinviertel as part of the Hollabrunn district . North borders Hardegg with the river Thaya in the Czech Republic . The city of Hardegg itself - without the incorporated towns - has only 84 inhabitants as of January 1, 2020, making it the smallest city in Austria.

The municipality includes the following nine localities (population in brackets as of January 1, 2020):

Hardegg was very isolated, especially up until the fall of the Iron Curtain . There is only the Hardegg - Čížov bridge over the Thaya to the Czech Republic . This is also reflected in the decreasing number of residents. The only economic factor to be mentioned is increasing tourism. The highest population since the beginning of statistical recording by the state was already recorded in 1890, when Hardegg had 3,209 inhabitants. Since then - with the only exception of the period between the two censuses in 1939 and 1951 - the population has been steadily decreasing. Incidentally, this is indicative of the Hollabrunn district, in which no population growth has been recorded since 1890.

The municipal council has 19 members.

Parish Church of Hardegg and Karner

Cities and municipalities in the Hollabrunn district