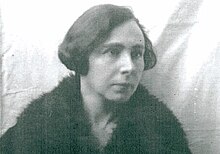 Harriet Keilmann grew up in Riga , at that time the capital of the Russian governorate of Livonia , in an assimilated, upper-class, German acculturated Jewish family. Her father Isidor Philipp Keilmann and her mother Eugenie Jakobovna, geb. Kantorowitz had been working as dentists in Riga since 1881. Harriet had two younger brothers: the businessman Paul Otto Sidorowitsch (* 1888 in Riga; † April 1940 in Riga) and the pediatrician Nikolai Alexander Sidorowitsch (born July 24, 1896 in Riga, on March 30, 1942 in the Stutthof concentration camp near Danzig von den National Socialists murdered). Harriet's mother Eugenie was murdered by the National Socialists in the Riga ghetto in autumn 1941 ; her father Isidor committed suicide on April 20, 1942 to avoid deportation to one of the death camps. 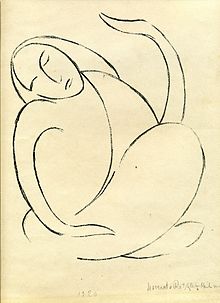 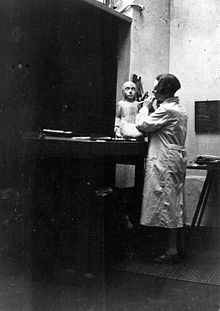 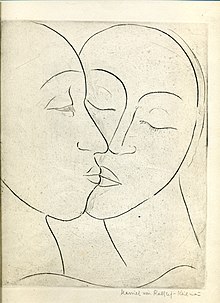 Because of the anti-Jewish repression in the Russian Empire, Isidor Keilmann secretly settled in the German Reformed castle church in Königsberg i. Pr. Baptize. His wife Eugenie and their two children Harriet and Paul were baptized in 1896. The family was able to register with the Russian authorities in Riga in the register of German residents with the baptismal certificates.

After completing her schooling at the Reinschen Höhere Töchterschule and attending evening courses at the private Jung-Stilling'schen drawing school in Riga, Harriet Keilmann completed an apprenticeship as a sculptor in Riga with the sculptor August Volz . Sculpture studies in Berlin as a student of the animal sculptor August Gaul , at the private study studios for painting and sculpture founded and directed by the sculptor Arthur Lewin-Funcke (1866–1937), which were also called Lewin-Funcke School , and in Munich in that of Wilhelm Debschitz (1871–1948) and Hermann Obrist (1862–1927) founded and directed teaching and experimental atelier for applied and free art (this private art school, which was also accessible to women, was also known as the Debschitz School ) followed.

After returning to Riga from Munich, Harriet Keilmann worked as a sculptor in August Volz's workshop. In 1908 Harriet Keilmann married the German-Baltic agronomist and seed researcher Harald von Rathlef in the German Reformed Church in Riga (born March 1, 1878 in Gut Lachmes, Livonia; † July 15, 1944 Königsberg i. Pr .; 1935 to 1944 scientific director the Central Office for Rose Research and the Rosarium in Sangerhausen ). The marriage took place against the resistance of the groom's parents and other members of the von Rathlef family, who were against a connection between their son and the artist, who came from a Jewish family. Harriet and Harald von Rathlef moved to the small Nömmiko seed testing farm near Dorpat in Northern Livland . There she continued to work as a sculptor and between 1908 and 1914 exhibited her sculptures and animal reliefs at the art exhibitions organized by the Riga Art Association in the Riga Museum of Applied Arts.

Due to the turmoil of the civil war, the family fled to Germany in December 1918. There Harriet went to the Grand Ducal Art Academy in Weimar in the class of the German-Jewish sculptor Richard Engelmann . She then took over the State Bauhaus in Weimar as a free student. In 1919 she participated with her animal sculptures, which were still made in the naturalistic style, in the exhibition of paintings and sculptures by Weimar artists organized in the Weimar Museum of Art and Industry . Under the influence of master craftsmen Gerhard Marcks , Johannes Itten and Lyonel Feininger , the artist turned away from sculptural naturalism towards expressionism. Expressive, partly colored wood reliefs with religious content as well as etchings, lithographs and woodcuts were created.

In 1921 she divorced her husband, who married the arts and craftsman and Van de Velde student Charlotte Emilie Anna Veit (daughter of the gynecologist Johann Veit ).

As a master student of the sculptor Richard Engelmann , she left the Academy of Fine Arts in Weimar in 1922 . Through the mediation of her former Bauhaus fellow student Reinhard Hilker , she went to Hagen for a short time , where she and her fellow student from the Bauhaus Weimar Ise Bienert (actually Marie Luise Bienert, daughter of the Dresden art collector and patron Ida Bienert ) her expressionist works in the Folkwang Museum issued. Numerous exhibitions in the Rhineland followed (member of the " Junge Rheinland ").

The move to Berlin in 1924 was in the hope of getting on better financially as a visual artist in the pulsating Reich capital. The first exhibition in the "Kunst- und Buchheim K. and E. Twardy" and at the jury-free art exhibition took place in the same year. In 1925 she exhibited her works in the Graphisches Kabinett Maria Kunde in the Bieberhaus in Hamburg. In order to change her bad financial situation, the artist also tried herself as a writer. In 1926 her "Retelling of Old Russian Peasant Legends", illustrated with two expressive woodcuts, was published by Furche-Verlag Berlin. In the same year she joined the Association of German Writers .

At the request of the Catholic social theologian Carl Sonnenschein , she interrupted her artistic work in order to selflessly devote herself to the three years of caring for the alleged Tsarevna Anastasia Nikolajewna Romanowa (aka Franziska Schanzkowska, aka Anna Anderson ). In her book Anastasia - A Woman's Fate as a Mirror of the World Catastrophe. Investigations into the youngest daughter of Tsar Nicholas II (1928), the artist made the fate of Anastasia known to the public. Rathlef-Keilmann's research was printed in advance in the newspapers of the Scherl-Verlag , among others . The artist passed on all the income generated to the alleged tsar's daughter.

The active theologian Carl Sonnenschein's influence on the artist was so great that he persuaded her to convert to the Roman Catholic Church and to join the Circle of Catholic Artists (KKK) which he founded . By converting to the Roman Catholic Church, the artist was able to keep her Jewish origins a secret. This group of Catholic artists included the sculptors Hans Perathoner , Berthold Müller-Oerlinghausen , Jenny Wiegmann-Mucchi , Gabriele Mucchi and Hans Breinlinger , the painters Maximilian Habersetzer , Rudolf Schlichter , Elsa Eisgruber , Josi Sander , Anita Blum , Otto Kainz and Odo Tattenpach as well as the architects Josef Bachem , Guido Goerres and Fritz Spannagel .

After the " seizure of power " by the National Socialists , Harriet was expelled from the board of the Association of Berlin Artists on April 3, 1933, two days after the Nazis' boycott of Jewish businesses, doctors and lawyers . With her, her fellow Jewish artists Fanny Remak , Julie Wolfthorn , Alice von Niebelschütz , Edda Wiese-Knopf , Lotte Laserstein and the painter Gertrud Koref-Stemmler, who was married to the German-Jewish chemist Fritz Koref , had to leave the board of the VdBK.

Harriet was still a member of the jury for the spring exhibition “Women at Work” (March – April 1933) organized by the Association of Berlin Women Artists, where she last showed her expressive wooden sculptures and reliefs. In addition, she was appointed to the jury of the German Lyceum Club for the trade fair exhibition Woman and Child in Art (March 1933). As a consequence of the increasing anti-Semitic riots and the art policy of the Nazis, she withdrew her works from the Great Berlin Art Exhibition (GroBeKa) held from April to June 1933 in Bellevue Palace . Like some of her artist colleagues, Harriet prepared to emigrate to Paris . A ruptured appendix thwarted her plans. On May 1, 1933, she died in Westend Hospital after a doctor friend tried to save her life in her Schöneberg studio (An der Apostel-Kirche 14) with an emergency operation. Due to the accumulated debts, the inventory of her studio was publicly foreclosed a few months after her death. Harriet's friend from her school days in Riga, Monica Küttner, and the surviving daughters Monika and Liselotte were able to secure a few works beforehand (allegedly, some artist colleagues are also said to have taken care of the deceased's works and passed them on to a museum). The expressionist works of art by Harriet von Rathlef-Keilmann were described as "degenerate" during the Nazi era and were taken from public collections, e.g. B. the drypoint love couple from the Kunstgewerbemuseum Kaiserslautern removed.