The International Building Exhibition 1987 (IBA) was an architectural exhibition of the Senate in West Berlin, institutionalized in 1978 by a resolution of the House of Representatives, with the urban planning concept of a new building taking into account the basic structure of the historic city. In the course of the preparations and under public pressure, however, there was a change of course from the practiced area renovation to cautious urban renewal .

The idea came from the then Berlin Senate Building Director Hans-Christian Müller . The IBA's leading architects were Josef Paul Kleihues for the critical reconstruction focus , who dealt with new buildings in inner-city areas as part of a city repair, and later Hardt-Waltherr Hämer for the cautious urban renewal focus , which was geared towards the renovation of old building areas.

As part of the focus on careful urban renewal , the 12 principles of urban renewal were created , which became the basis of the Berlin urban renewal process . The projects originated in the former districts of Tiergarten (southern Tiergarten district ), Kreuzberg ( southern Friedrichstadt - formerly Luisenstadt - and SO 36 ) and occasionally in Tegel and Wilmersdorf ( Prager Platz ).

Background and aim of the IBA: Recognition of the stock

The early urban development of the post-war period in Germany rejected the historical building structures (high density blocks with rear buildings, some of which were still medieval). In the old inner cities, the hygienic conditions and the infrastructure were inadequate, and the experience of the bombing war spoke against building too tightly. So healthy and safe life would only be possible in a completely new city. This required a tabula rasa : the old city should give way as completely as possible.

Districts of the city were demolished and replaced with completely new structures (e.g. the development around the Kottbusser Tor in Berlin-Kreuzberg or the Rollbergviertel in Berlin-Neukölln). Other existing buildings - also of good quality - were deliberately left to decay in order to be replaced by high-rise office buildings (in West Germany e.g. Frankfurt-Westend ). Urban development in the 1960s and 1970s was characterized by extensive ignorance of the historical situation. The concept was called " area renovation ".

Resistance to this practice arose in the 1970s from affected residents and also from students and university lecturers, especially in the fields of architecture and urban planning. The professor at the Berlin University of Fine Arts , Hardt-Waltherr Hämer , sent his students to the endangered areas and made the design of alternatives the subject of joint work.

The “redevelopment concepts for the redevelopment area Kreuzberg Kottbusser Tor and for the redevelopment area Charlottenburg Klausenerplatz respected the historical street layout for the first time in a larger area. They refrained from destroying the historical street and square structure. But these concepts were also associated with an almost complete demolition of the existing building fabric. It was planned to modernize a few buildings on the edge of the block, most of which should be replaced by new buildings. "

The dispute over block 118 on Klausenerplatz then signaled a change of course. For the first time, “a significant part of the development within a building block was not demolished. This concept, for which Hardt-Waltherr Hämer was responsible, was implemented in the context of considerable social conflicts against the official Senate policy and against the redevelopment agency , the non-profit housing association “ Neue Heimat ”. Block 118 was presented in the European Monument Protection Year 1975, which also marked a turning point in urban development for the Federal Republic of Germany and West Berlin. "

Admittedly, J. P. Kleihues, a “critical” new building architect, was appointed director of the building exhibition planned for 1984, but H. W. Hämer was soon moved to his side as the second director.

The new IBA thus represented a contrast to the Interbau of 1957 ( Berlin-Hansaviertel ). For the first time in the history of the building exhibition, the central concern was the renewal of the old building stock and, if necessary, the addition of new buildings to the stock. The Bauausstellung Berlin GmbH was founded in 1979 by the Berlin Senate. The core of the IBA Berlin 1978–1987 were therefore two approaches to urban development:

As part of competitions with international architects, a large number of new building projects were implemented between 1979 and 1987, mainly in southern Friedrichstadt , the southern Tiergarten district and the Tegeler Hafen. 1979–1987 the Berlin architect Josef Paul Kleihues was planning director for the new building areas of the International Building Exhibition (IBA) Berlin.

Kleihues' new building approach was no justification for area redevelopment, whose program "aimed to overcome the system of squares, streets and building blocks that the city had created in the late nineteenth century." In contrast, Kleihues had in two studies to his Berlin atlas marks “'where the existing urban structure is interrupted or disturbed.' […] The new city of the 1950s and 1960s was regarded as a “disruption”, and the “historic city”, the city of the late 19th century, was disrupted. That was a radically new perspective at the time, but also a sharp criticism of the previous restructuring policy. "

Kleihues wanted to preserve the urban structure, "the system of squares, streets and building blocks", as a basic pattern and, as it were, to reconstruct it by means of a new building, which also meant a "restoration of the peripheral buildings" in the Berlin ruins. The concept aimed "at the principle of the 'critical reconstruction of the city', of restoration, of orientation to the historical fragments that were still there."

The term critical reconstruction was popularized by Josef Paul Kleihues. For him it was about "the reconstruction of the city taking into account modern demands: 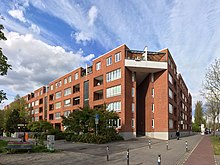 Residential development Vinetaplatz, Bernauer Straße, 1971–1978, Josef Paul Kleihues , Manfred Schonlau, Berlin-Wedding - restoration of the figure of an earlier building block in perimeter block development as a prototype of the critical reconstruction of the city

Critical reconstruction of the city means priority of urban development over architecture and its subordination to an urban planning framework that “respects and reinterprets the history of the place”. It is not understood as a rigid dogma, but as a flexible working framework. In the new building block on Vinetaplatz, this concept was first implemented as part of the First West Berlin Urban Renewal Program, planned from 1971, implemented from 1975 to 1977.

Demolition and housing shortages led to massive protests, which in 1977 resulted in the Strategies for Kreuzberg competition and, from 1979, the illegal “ repair (occupation) ” of numerous empty houses in the district. This was the starting point for the IBA old building. Her main concerns include the maintenance, stabilization and further development of the existing social and functional structures in the city as well as the implementation of processes such as self-help and tenant modernization. Planning director from 1979 to 1985 was the Berlin architect, urban planner and later Honorary Senator of the University of the Arts , Hardt-Waltherr Hämer . In this phase, the concept of cautious urban renewal was developed, which replaced the area renovation .

From 1975 to January 1981 Harry Ristock was the responsible Senator for Construction and Housing.

Consequences of the IBA 1987

The private STERN GmbH , founded in succession to the IBA, continued the renewal process with the same team from January 1986 to December 1992. In 1994, the State of Berlin was awarded the European Urban and Regional Award for its exceptional achievements in the context of careful urban renewal in Kreuzberg . Overall, the old IBA building in particular led the planning into a new era: the new building is taking a back seat to securing and modernizing the existing stock. With its pilot projects, it was the trigger of funding programs for urban renewal and changes in legal practice for redevelopment and environmental protection . 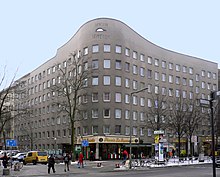 The following architects took part in the 1987 International Building Exhibition :