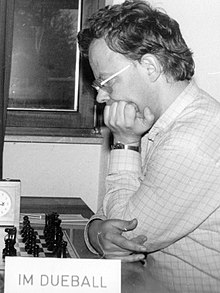 Dueball played Go, a game that his family had fostered since Dueball’s grandfather, Dr. Felix Dueball popularized this game in Germany in the 1930s . His father Fritz Dueball was European champion in 1957, 1958 and 1959 .

Jürgen Dueball was runner-up in Europe several times and spent six months in Japan in the 1960s to devote himself to the game of Go. He reached the 5th dan .

He found chess a little late. It wasn't until the 1960s that he began to draw attention to himself: in 1966 he won the Dähne Cup (the individual German cup championship) by defeating Ulrich Jahr. At that time he was already active in the Berlin chess club Wilmersdorf and next to Rudolf Teschner the best player there. He had the most prosperous period of his international career at the beginning of the 1970s, when he managed to achieve the title of International Master in 1973 . His greatest individual success was the shared first place in the international tournament of Reggio nell'Emilia 1973/74. As a team athlete, he made 72 appearances in the German national team, including at the 1972 Chess Olympiads in Skopje (9 points from 13 games) and 1974 in Nice (10.5 points from 16 games) and at the 1973 European Team Championship in Bath . After moving to Solingen in 1978 , he became a member of the Solingen SG 1868 , with which he became German team champion in 1980 , 1981 , 1987 and 1988 and won the European Cup in 1990 . Dueball's contributions to the development of opening theory were also respected and valued at the grandmaster level. He was known for his excellent memory.

In addition to chess and go, he also played bridge at a high level. With his club in Leverkusen Dueball was also the German team champion in bridge.

Dueball studied physics at the Free University of Berlin from the summer semester of 1962 , although he mainly attended lectures in mathematics. In 1964 he published an essay on astronomy : To the problem of the period length of UZ Draconis , in: Berliner Arbeitsgemeinschaft für Veränderliche Sterne, pp. 109–111, Berlin 1964.

Until his death from a stroke in 2002, he was a programmer in the city administration of Solingen.

Winner of the Dähne Cup