Network Ten (also Channel Ten or Ten , proper spelling TEN ) is one of the three most important Australian commercial broadcasting companies. The private television broadcaster began broadcasting its program on August 1, 1964. Today he is one of five free TV channels in Australia. The television station has its own owned-and-operated stations in Sydney , Melbourne , Brisbane , Adelaide and Perth . The station has been part of the CBS Corporation since 2017 . 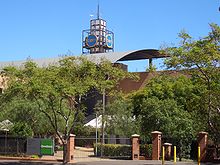 In 1963 in Sydney the license to United Telecasters Sydney Limited awarded announcing their station in September as TEN10. TEN10 officially started on April 5, 1965 with the transmission of the music program TV Spells Magic . Further television stations were founded in other cities.

Shortly afterwards, the 0-10 Network was founded, an amalgamation of TVQ0 Brisbane, SAS10 Adelaide, TEN10 and ATV0. Only STW9 remained as the only independent station before joining the Nine Network.

In 1979 media mogul Rupert Murdoch bought the network. In 1980 the name was finally changed to Network Ten. After the ratings declined in the 1980s, the network re-established itself strongly by the end of the 1990s. For example, the 1984 Summer Olympics in Los Angeles were broadcast on Network Ten , with the opening ceremony setting a new record.

In 1985, Ten revitalized the soap Neighbors , which previously aired on the Seven Network, but remained relatively unsuccessful. It became a huge success, both in Australia and in Great Britain and Germany, where it was broadcast on Sat.1 for several years . Further successes were the game show Perfect Match (1984-1989), the mini-series Return to Eden (1983), the breakfast program Good Morning Australia (1981-1992) and the expensive and lavish mini-series The Dismissal (1983), Bodyline (1984), Vietnam (1987) and Bangkok Hilton (1989).

In 1987, both ATV10 and TEN10 came to Frank Lowy's Westfield Corporation, while TVQ0 Brisbane was bought by Darling Downs TV. Kerry Strokes bought NEW10 Perth, Capital Television and ADS7, the station was previously part of the Seven Network. However, all broadcasters remained part of the Ten Network. While in the 1980s it was mainly his own productions, the highest ratings were achieved in the 1990s with American series such as Seinfeld , Beverly Hills 90210 , Melrose Place , The X-Files and The Simpsons . In addition, sporting events such as The Commonwealth Games in 1994 and the Melbourne Cup became a mainstay of the station.

In 2000, late night host Rove McManus joined Ten and produced his show Rove Live (later Rove ), which became hugely popular in Australia. In the same year, Ten started serving the digital market. On January 1, 2001, Ten Digital was first broadcast. Among other things, the program was broadcast in widescreen and had the option of broadcasting various camera angles. A number of licensed shows have been broadcast since 2001, starting with the Australian version of Big Brother , which ran from 2001 to 2008. This was followed by Australian Idol , The Biggest Loser and So You Think You Can Dance? .

From 2002 to 2007 there was a collaboration with Foxtel and Nine. The three broadcasters shared the broadcasting rights of the Australian Football League . The partnership was continued from 2007 to 2011 without nine, but with seven.

Series such as the children's and youth series Elephant Princess and H 2 O - Suddenly Mermaid , series such as Rush , Thank God You're Here and Total Genial became new formats .

In 2007, the HD channel Ten HD went into operation for the first time. In 2009 it was renamed One HD. In 2011, the pay TV broadcaster Eleven joined Ten Network.

After Ten filed for bankruptcy in June 2017, it was taken over by its largest creditors, the US-based CBS Corporation (main content provider) and the Australian WIN Television . The acquisition, which cost CBS $ 31 million, resulted in the loss of a contract with long-time partner Fox Network , which subsequently pulled out of its content deal, and the end of shows like The Simpsons and Modern Family on the network.