Main source of the Rhume spring ; near Rhumspringe in the eastern part of the Rotenberg 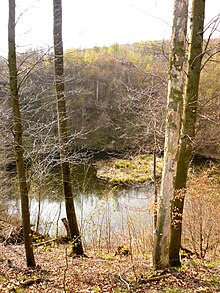 Floating island , a sinkhole of the Rotenberg

The Rotenberg is up to 317.3  m above sea level. NHN high mountain range of the Lower Saxony mountains in the district of Göttingen in the southeast part of southern Lower Saxony ( Germany ).

The Rotenberg is surrounded by these high and low mountain ranges : Harz in the north and a little further away are the Ohm Mountains in the southeast and the Göttingen Forest in the southwest.

The highest point of the Rotenberg is 317.3  m above sea level. NN the Rotenberg of the same name, which rises in its extreme southeastern part not far west of the state border with Thuringia . The ridge falls relatively steeply to the northeast to the Pöhlder basin and to the southwest to the Rhumetal relatively flat and with a more pronounced structure. Beyond the state border, the ridge merges in an easterly direction into the northern mountain landscape of the Eichsfeld or with the Silkeroder hill country in the southern foothills of the Harz Mountains.

The Rotenberg lies on the watershed between the Oder and Beber in the north and Rhume and Eller in the south, and is directly framed by the flowing waters . These rivers and the small brooks that arise in the ridge belong to the catchment area of the Leine, which runs a few kilometers to the west .

The Rotenberg ridge belongs to the natural spatial main unit group of Lower Saxony Bergland (No. D36), in its part Weser-Leine-Bergland (37) and in the main unit Eichsfeld Basin ( Goldene Mark ; 374) to the natural area / subunit (The) Rotenberg / Rhumebergland (374.50 / 374.5). The landscape falls to the south-west into the sub-unit Rhume-Aue / Rhume - Eller -Aue (374.4) and leads to the south-east into the Silkeroder Hügelland (374.51). To the northeast it falls into the natural area of gravel fields of the Rhume, Oder and Sieber (376.23), which belongs to the subunit of the south-western Harz foreland in the narrower sense / Osterode-Herzberger Vorland (376.2).

The elevations in and near the Rotenberg ridge include:

The rivers in and on the Rotenberg ridge include:

The villages on the Rotenberg ridge include:

The Rotenberg is an old border region with a medieval Landwehr to protect the Golden Mark , of which, however, there are no more visible signs. A trade route ran over its ridge with the Fastweg until the late Middle Ages.

Excavated gate of the Pöhlde Wallburg on the Rotenberg

In addition to the partly wooded landscape of the Rotenberg, its sights include the Rhume spring (northeast of Rhumspringe) and the floating island sinkhole . In addition, the Wallburg Pöhlde is located on the Rotenberg a little south of Pöhlde as a former refugee castle , which, according to legend, is also known as King Heinrichs Vogelherd . The Fastweg , an army and trade route leading west from Central Germany , ran past the fortifications . Some barrows point to a prehistoric settlement. Several ponds , which among other things serve the fishing industry, loosen up the landscape.

The Rotenberg, which is only populated on its edges, is criss-crossed by several hiking trails on which the partly wooded landscape can be explored. Among other things, the Solling-Harz-Querweg , which begins in Hardegsen and ends at the source of the Rhume , runs on the ridge of the Rotenberg.

The Rotenberg can be reached via the federal roads 247 , which touch the ridge in the northwest-south direction, 241 which passes it northwest, and 27 , which cuts through it in the southwest-northeast direction, branching off, mostly winding, and the forest area surrounding state and district roads that connect, for example, Wulften, Pöhlde and Rhumspringe and Bilshausen.