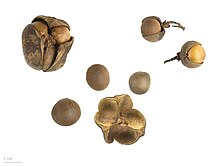 The tea plant ( Camellia sinensis ) is a species of the genus Camellia ( Camellia ) within the tea bush family (Theaceae). Real tea is obtained from the parts of the plant . 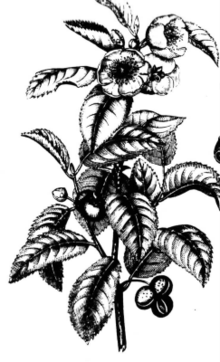 Illustration of a tea plant

Flower and flower buds of a tea plant ( Longjing tea , "dragon fountain tea ") with the many stamens

The Camellia sinensis varieties grow as evergreen shrubs or small trees with heights of 1 to 5, rarely up to 9 meters. The bark of young twigs is initially reddish in color and covered with white hairs, but it quickly becomes bare and turns yellowish-gray. The end buds are also silvery hairy.

The alternate leaves arranged on the branches are divided into a petiole and a leaf blade. The petiole is short. The simple leaf blade is round to elongated-elliptical with a length of 5 to 14 centimeters and a width of 2 to 7.5 centimeters with a wedge-shaped blade base and blunt upper end, which has an indicated trickle tip . The leaf margin is serrated. The upper side of the leaf is dark green, smooth and shiny. The underside of the leaf is lighter in color and may be hairy. In addition to the midrib, there are seven to nine leaf veins on each side, from which further reticulated leaf veins branch off. The leaf veins are equally visible and protruding on the top and bottom of the leaf.

From October to February the flowers appear singly or in threes in the leaf axils. Under each stalked flower there are two bracts that fall off early. With a diameter of 2.5 to 3.5 centimeters, the radially symmetrical flowers are hermaphroditic with a double flower envelope . The inside of the five sepals is usually hairy. The six to eight white petals are arranged in two circles, the outer one to three resemble the sepals, the inner ones are fused together at their base. The many stamens are arranged in four or five circles, those of the outer circle are fused together at the base. The ovary is usually hairy. The approximately 1 centimeter long stylus ends in a three-lobed scar .

The capsule fruit is flattened and contains one or two brown, rounded seeds . They ripen from August to October.

It was first published in 1753 under the name (Basionym) Thea sinensis by Carl von Linné in Species Plantarum , 1, p. 515. A new combination was carried out in 1887 by Kuntze in Trudy Imperatorskago S.-Peterburgskago Botaničeskago Sada , 10, p. 195; he placed them under the name Camellia sinensis in the genus Camellia .

Camellia sinensis belongs to the Thea (L.) Dyer section in Hook. within the genus of Camellia .

There are four varieties within the species Camellia sinensis :

The distribution area of ​​the Camellia sinensis varieties extends from southern Japan and Korea across the southern half of China to northeastern India ( Camellia sinensis var. Assamica ). To the south, Camellia sinensis is even more widespread to Laos , Myanmar , Thailand and Vietnam . It grows in the undergrowth of evergreen laurel forests (Camellietea japonicae Miyw. & Ohnab 63). Due to the long period of human use, the natural area can no longer be precisely determined.

According to the FAO, 6.4 million tons of tea were harvested worldwide in 2018 . The world's ten largest tea producers together harvested 90.5% of the total in 2018.

From parts of the tea plant (leaves, leaf buds, stems) a hot infusion drink is made , the tea is prepared. Tea has a history that goes back many thousands of years and goes back to antiquity (see tea route ).

Camellia oil is obtained from the seeds .

Serve as a medicinal drug:

Studies indicate a cancer-preventing and cardiovascular disease, such as arteriosclerosis , protective effect, which is mainly attributed to the potential of these phenolic ingredients in green tea to act as radical scavengers . The amount of tea that is said to produce these health effects is stated differently and is between 4 and 10 cups per day. We warn against exaggerated expectations of being able to practice cancer prophylaxis with green tea. Definitive proof of effectiveness is still pending.

The tea plant is cultivated in the subtropics and in the tropics, there especially in high altitudes. Both green and black tea are mainly produced in Asia , but also in Africa , America, Australia and even in Europe (the Azores and Turkey). The most important tea-producing countries are China, India, Kenya , Sri Lanka and Turkey, which together account for around three quarters of world production. According to its own statement, Japan only produces green teas . Black tea for own consumption is imported. Although tea is almost exclusively harvested by machine in Japan, the quality of many Japanese green teas is of the highest quality. This is related to the very old Japanese traditions in which tea is seen as a mediator between art, philosophy and way of life ( Japanese tea ceremony ). Quality green teas continue to come from China, but only in small quantities, as these teas are made exclusively by hand. Therefore, they are so expensive that they can be used as gifts for special guests of state.

The most important importing countries are Great Britain , Russia , Pakistan , the USA and the Arab states.

According to the German Tea Association , in which most of the companies in the German tea trading and processing industry are organized, the German annual consumption of tea in 2014 was 19,176 t or almost 27.5 l of tea per capita. Germany is also an important location for tea processing: almost half of the tea imported was exported again in 2014.

Well-known tea-growing areas, after which the varieties produced there are named 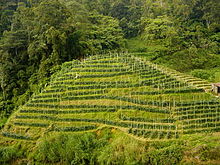 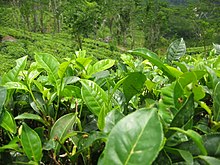 Tea bush in a plantation

Tea is harvested every 6 to 14 days throughout the growing season. The best qualities are still harvested almost exclusively by hand. Tea picking is a craft that requires considerable experience and is mostly practiced by women. With top teas, only the bud of each shoot with two leaves is harvested ( two leaves and a bud ). Approx. 8 kg of fresh tea leaves have to be picked for 1 kg of finished black tea. Mechanical harvesting methods are often used to produce simple types of tea. Japanese tea production is an exception - high-quality teas are also harvested here by machine. The harvest and production process has been perfected to such an extent that cut tea leaves for varieties such as B. Gyokuro can be used.

Depending on the location of the cultivation area, there are continuous or only monthly harvest times. The time of picking affects the color and taste of the tea. In Darjeeling, Sikkim , Nepal and other regions of the Himalayas there are distinct seasons, there the teas for trade and marketing are also named after the picking period: