Ulrich Christoph von Stille (born October 15, 1654 in Salzwedel ; † December 8, 1728 in Magdeburg ) was a Prussian lieutenant general and commander of the Magdeburg Fortress , and heir to Fretzdorf, Herzsprung and Christdorf (Wittstock / Dosse) . 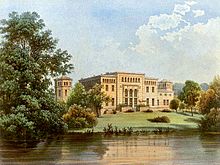 He was the son of Christian von Stille (n), a Mecklenburg chamber councilor . His mother was Katharina Margaretha Karstädt (Karstedt).

He joined the electoral bodyguard at the age of 16 , where he became a pikeman . In 1672 he moved with the Brandenburg troops into the Westphalian possessions against the French . However, since the Peace of Vossem followed in 1673 , he was allowed to leave the Brandenburg services to continue his military training. So he entered Dutch service. In 1674 he fought under the Prince of Orange at the siege of Graves , where he was wounded in the shoulder. When war against France broke out again, he left the Dutch army and became an officer of the guard. He fought with the guard in the battle of Fehrbellin and the siege of Stettin .

In 1676 the "von der Golz" regiment was formed from the guard . With him, Silence was present in all important battles against the Swedes. In 1681 he received his own company and was garrisoned with the regiment in Magdeburg . The fortress had fallen to Brandenburg shortly before. In 1685 the regiment's battalion was quietly sent to Hungary under the command of General Hans Adam von Schöning . There it fought successfully in front of the oven . Silence was broken by a poisoned arrow in the chest and a stone on the thigh. He survived and was promoted to major by the elector in 1689 . He was commissioned to set up a dragoon regiment. The regiment under its boss Friedrich Wilhelm von Wittenhorst-Sonsfeld became the base for the cuirassier regiment No. 7 . The elector was satisfied and so he was appointed commander of the regiment in 1690 . In the same year, his brother, the secret chamber councilor and post and salt office director Conrad Barthold Stille received the nobility letter from the elector for the whole family .

Coat of arms of those of silence

Conrad Barthold Stille and his brother Ulrich Christoph the alleged old nobility was confirmed. A descent from the Karstedt resident in Prignitz was also alleged, but this would not have withstood a closer examination without further ado. The mother of the two brothers Stille was Catharina Margarete Karstedt, from a middle-class family, resident in Lüneburg and originally from Perleberg , where the origins can be traced back to those of Karstedt. Only her mother, a née von Warnsaat , came from a family belonging to the nobility and who owned the Loppel estate until the end of the 16th century . So the Tartar hats came from the coat of arms of the von Karstedt family in the noble coat of arms of the Stille family. In 1691 Ulrich Christoph von Stille became a lieutenant colonel . In 1692, Margrave Karl Philipp von Brandenburg-Schwedt arranged for Stille to be his successor. The regiment was again in the field against the French and fought in 1693 in the Battle of Neerwinden . The regiment initially fought on the right wing. It then covered the retreat of the army by stopping by the river Kleine Gete and thus stopping the pursuers. For this success he was given command of the regiment in 1694. Next he moved to Savoy with four battalions of Brandenburger , where they took part in the siege of Casal .

In 1696 he became a colonel and moved with the troops back to the Upper Rhine , since the Duke of Savoy had again made peace with France. We find him in 1697 during the siege of Ebernburg and other actions. After the Peace of Rijswijk and the Peace of Utrecht , the regiment returned to Magdeburg and was replenished.

In 1698 the elector wanted to enforce his lien on Elbing and occupy the city. To support the action, the regiment was transferred to Pomerania .

With the outbreak of the War of Spanish Succession in 1701, Stille marched to Kleve and in 1702 to Kaiserswerth . That was stormed by Leopold von Anhalt-Dessau . Silence got a shot in the leg. In 1703 the regiment conquered Geldern and in 1704 it was transferred to Major General Albrecht Konrad Finck from Finckenstein to the Danube . So he fought on August 13, 1704 in the Battle of Hochstädt , where his horse was shot. Then his battalions moved to the siege of Landau . He excelled in the siege and was also present in the decisive storm on November 22nd. For this he was promoted to major general by King Friedrich I in 1705. When the king moved to Berlin, he was given supreme command of the eleven Brandenburg battalions and squadrons. In the same year he moved to Italy with eight battalions and ten squadrons. In Tyrol he handed the troops over to the Prince of Anhalt. He led the troops from Lacifo and St. Viglio to Maderno. In August he built a bridge with the grenadiers and 1,000 musketeers across the Adda River. In view of the strength of the enemy army, he had to dismantle the bridge, which he managed without losing a pontoon . In the subsequent Battle of Cassano he was able to distinguish himself again with the Brandenburg troops.

Subsequently he covered the transition of the army under Prinz Eugen over the Crema. In 1705 during the relief of Turin , he led the first attack on the French positions with the Margrave Philipp regiment and again lost a horse in the attack, and his left hand was seriously injured. So he had to leave the army to wait for his healing. He did not come back until the winter of 1707 and took over the supreme command of the Prussians. In 1708 he was there again in all important actions. In 1709 the king called him back to Brandenburg, in 1711 he got Infantry Regiment No. 20 (Börstell) and became the commandant of Magdeburg. When Friedrich Wilhelm I came to power, Stille had to set up another battalion. It fought in the Pomeranian campaign in 1715/1716 off Stralsund . In 1715, Stille was promoted to lieutenant general.

He died in December 1728 on the Schlagfluss and was buried in the crypt of the church of the Fretzdorf estate .

On January 20, 1696, he married Eva Maria von Cosel († January 20, 1736) from the Rosenwinkel house . With her he had five sons and four daughters. Major General Christoph Ludwig von Stille was his son.