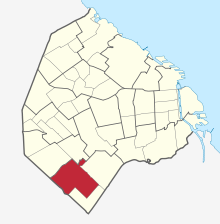 The Swiss immigrant José Ferdinando Francisco Soldati (born May 30, 1864 in Neggio, Ticino, Switzerland) bought a farm near the current intersection of Calle Murguiondo and Avenida Riestra. He shared the property and founded the place on October 18, 1908, which he named Lugano in memory of his old homeland . The place developed only gradually: in 1912 there were only about 40 families living there.

Between 1975 and 1980, the Luis Piedrabuena district was built as part of the Plan Alborada housing program . It mainly consists of high-rise buildings, slightly lower apartment blocks and single-family houses.

There are also five Villa Miserias in Villa Lugano , which means that the district, together with Villa Soldati, is one of those with the largest number of slums in the capital.

The Villa Lugano train station was opened on October 18, 1909, and the "Campo de Aviación de Lugano", the country's first airport, on March 23, 1910. The Frenchman Paul Castaibert built the first Argentine aircraft near the airport. Part of the “Universidad Tecnológica Nacional” is located in Villa Lugano today.

The “Parque Indoamericano” is one of the sights of the district. It is about 130 hectares and has more than 4,000 different tree species.

Some of the better-known residents of the district include:

Villa Lugano is connected to the city center by the station of the same name on the Belgrano Sur railway line and the Premetro .