from Wikipedia, the free encyclopedia
This is the spotted version , flagged on January 19, 2020 . There is 1 pending change that has yet to be viewed.

Zuozhen ( Chinese  左 鎮區 , Pinyin Zuǒzhèn Qū , Pe̍h-ōe-jī Chó-tìn-khu ) is a district of the government -immediate city ​​of Tainan in the southwest of the Republic of China in Taiwan .

Zuozhen is located in the southeast corner of the metropolitan area of ​​Tainan. The district is roughly in the shape of a square with an edge length of approximately 14 × 5.3 kilometers. The terrain is very hilly and has numerous so-called badlands . The erosion has shaped the landscape with steep mountain slopes, deep valleys, cliffs and meandering waters. The highest point is the altitude 308 (308 高地 ) near the border with the urban area of Kaohsiung , which is named after its height above sea level. The neighboring districts in Tainan are Longqi and Xinhua in the west, Shanshang in the north, and Yujing and Nanhua in the east. To the south, Zuozhen borders the urban area of ​​Kaohsiung ( Neimen district ). 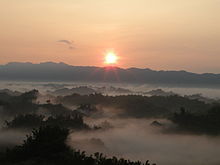 Historically, Zuozhen is particularly interesting because of the prehistoric and paleontological finds. In 1931, a local resident discovered a fossil in the bed of the small river Ts'ai liao ( 菜 寮 溪 , Cài liáo Xī ), which was later sent to Ichirō Hayasaka , professor of paleontology at the then Imperial University of Taihoku (now the Taiwan National University in Taipei ) and identified as an elephant tooth. The area was found to be rich in fossils and several scientific expeditions were undertaken to explore it. Among other things, the remains of a Taiwanese alligator Tomistoma taiwanicus were found in 1936 , and in 1971 a 40 percent intact prehistoric rhinoceros, which was named in honor of Hayasaka's Rhinoceros sinensis hayasakai . The age of these rhino fossils has been estimated to be 450,000 to 900,000 years.

In 1971, the first prehistoric human finds in Taiwan were made in the Ts'ai liao river bed . There were several skull fragments and molars that were dated to an age of 20,000 to 30,000 years. The Stone Age human type found here was later called the Zuozhen human .

In later, historical times, the area of ​​Zuozhen was settled by members of Austronesian tribes. During the reign of Zheng Chenggong , an influx of Han Chinese settlers began, who over time made up the majority of the population. However, the settlement density remained low at all times due to the remoteness and the poorly productive soils. At the time of Japanese rule (1895-1945) there was a major administrative reorganization of Taiwan in November 1920 and the Zuozhen area was organized as the village of Zuozhen ( 左 鎮 庄 ) in Xinhua County ( 新化 郡 ) in Tainan Prefecture . After the Republic of China took over Taiwan in 1945, Zuozhen became a rural community ( 鄉 , Xiāng ) in the newly formed Tainan County . With the dissolution of the district on December 25, 2010 and annexation to the city of Tainan, Zuozhen became a municipality ( 區 , Qū ) of Tainan.

Zuozhen is comparatively sparsely populated. In terms of population, the district with just under 4,900 inhabitants was second to last among the 37 districts of Tainan. Members of indigenous peoples make up only a small minority (approx. 0.3%). The population has been decreasing for a long time.

The economic structure is shaped by agriculture. Due to the nutrient-poor soils, high yields cannot be achieved and the potential is seen primarily in the production of special products and organic farming. The main crops are rice , sugar cane and bamboo shoots .