This article covers the year 911, see 911 (disambiguation) for other meanings . 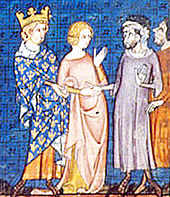 Charles III gives Rollo the hand of his daughter Gisela

Anastasius III. is the successor of Sergius III , who died on April 14th . elected pope . There are virtually no records of him. His pontificate falls into the time of the rule of Roman nobles over Rome and the rule of mistresses .