The Buick LeSabre was a series of passenger cars manufactured by Buick from late 1958 to mid-2005 as the successor to the Buick Special in the United States. For many years the LeSabre was Buick's entry-level model with the lowest base price.

The successor to the Buick Special , released at the end of 1958, had a completely new styling with a flatter bonnet and sloping double headlights. The tail fins had a wing shape.

The cars were equipped with a V8 engine with 5965 cc capacity, a power of 250 hp (184 kW) at 4400 min -1 developed. This engine, adopted from the 1958 model year, was smaller than the 6.6-liter V8 engine of the more expensive Invicta and Electra models . Six different two- to five-door bodies were available. Most of the cars were delivered with a two-speed automatic transmission; a manual three-speed gearbox was available on request.

There were few changes in 1960, but in 1961 a much more defused body version came onto the market, in which the double headlights were arranged side by side within the wide radiator grille and the winged tail fins gave way to a smooth trunk lid. With the reintroduction of the Special, the LeSabre was only the second cheapest model range from the brand.

Little changed in the styling of the body for the 1962 model year. However, only four body variants were offered: sedans with two or four doors, a two-door hardtop coupé and a four-door hardtop sedan.

The cars were now equipped with the V8 engine of the larger models with 6571 cm³, which made 280 hp (206 kW). On request, a reduced-power version with lower compression and with only 260 hp (191 kW) was available at the same price.

There were no technical or stylistic changes in the following year, but station wagons and convertibles were available again. With the introduction of the Skylark , the LeSabre rose to the mid-range model range.

In the spring of 1964, the LeSabre appeared slightly revised and again in four body styles: as a four-door sedan (with B-pillars and as a hardtop), as a two-door convertible and as a two-door coupé (also with a hardtop). The five-door station wagons formed the independent series 4600. Smaller engines with only 4916 cm³ and 210 hp (154 kW) were now used. There was also a three-stage automatic transmission.

In 1965, the technically identical models were available in standard and custom versions, although the convertible was only available as a custom version. The styling of the vehicles was a little more angular.

In the following year, the station wagons formed their own series called Sport Wagon , and the two-door coupé was designed as a hardtop. A significant facelift resulted in a strongly contoured radiator grille and a hip swing over the rear wheel cutouts. In addition, a larger engine with 5572 cc and 220 hp (162 kW) was used. This model series was continued in 1967 without any major changes. 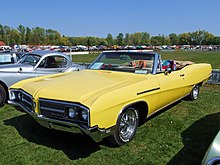 In 1968 there were only slight stylistic adjustments, e.g. B. rectangular bezels for the round double headlights. The engine output was increased again, this time to 5735 cm³ and 230 PS (169 kW). In 1969, the front section of the otherwise technically unchanged vehicle was smoothed out slightly.

In 1971, completely redesigned, larger bodies were presented. Technically, however, they stayed with the previous year's offers, with the 5.7-l V8 engine only delivering 230 bhp (169 kW). Front disc brakes, a three-speed automatic transmission and power steering became standard on all LeSabre models.

In 1972, the performance data were changed to SAE-PS (nhp), which drastically reduced the nominal values, since the performance was now measured with all ancillary units and on the rear axle. The only 5.7-liter V8 engine available now only had 150 hp; the 455's 7.5-liter V8 was dropped from the range. There were only minor changes in style.

In the following year, the 7.5-liter V8 engine was offered again and offered 225 nhp; the output of the 5.7-liter V8 engine rose to 175 hp. The convertible was not offered this year. Otherwise there were hardly any changes.

In 1974 there was another significant facelift. The round double headlights in their rectangular frames were now arranged to the side of the radiator grille, the upper halves of which consisted of panels in body color. There was also a convertible again, but only as a LeSabre Luxus (the luxury replaced the custom ).

In 1975 the engine output sank to 165 nhp and 205 nhp, respectively, due to the use of catalytic converters. Unleaded petrol was also used for the first time. The luxury was called custom again . There was also only a slight facelift.

In 1976, the convertible fell out of the program because of its lasting failure. The other models received small, rectangular double headlights with indicators and marker lights arranged below. For the first time in the LeSabre and once in a US vehicle of the upper middle class, a V6 engine with 3785 cm³ displacement was offered as basic equipment. This was only available for the standard version and developed 105 hp.

The LeSabre entered the 1977 model year in the fall of 1976, significantly reduced in size, but without any significant stylistic changes.

As with all GM vehicles of the time, size and weight were significantly reduced in response to the oil crisis , but without significantly reducing the space in the interior and in the trunk. The rear-wheel drive was also initially retained. Hardtop models were no longer offered. So there was only a four-door sedan and a two-door coupé. The engine range has been expanded: In addition to the 3.8-liter V6 engine known from the previous year with an unchanged 105 hp, there were four different V8 engines: 4933 cc with 135 hp (99 kW), 5735 cc with 155 hp (114 kW) ) or 170 PS (125 kW) and 6604 cm³ with 185 PS (136 kW).

The next year, a V6 turbo engine was added for the LeSabre Sport Coupé, which also generated 165 hp (121 kW) from a 3.8 liter displacement, and the 4.9 l V8 engine was replaced by a Replaced V8 engine with 4998 cc, which made 145 hp (107 kW). The front of the vehicle had also been significantly changed: there was a Mercedes-style radiator grille that extended to below the twin headlights (where the indicators and parking lights had previously been located). The indicators moved to the corners of the vehicle. In accordance with the new legal regulations, the vehicles now had yellow marker lights on the side of the front fenders and corresponding red lights on the sides of the rear fenders.

In the following year, the Mercedes-like radiator grille showed a fine-meshed network structure, the basic V6 engine now developed 110 hp (81 kW). There was also a larger V6 engine with 4130 cc and 125 hp (92 kW). Also new was the LeSabre Estate Wagon , a five-door station wagon based on the same floor pan as the sedan and coupé, but which was only available with a V8 engine.

In 1981 there was another major revision: the radiator grille was divided into a coarser-meshed network structure and, as before, extended back to below the rectangular twin headlights. The diverse range of engines, based on similar engine assemblies from different GM manufacturers ( Oldsmobile , Pontiac , Chevrolet ), was significantly reduced. There were only four engines left: the two V6 engines from the previous year (the V6 turbo engine was omitted together with the LeSabre Sport ), and a new V8 engine with 5031 cm³ displacement and an output of 140 hp (103 kW) and for the first time also a V8 diesel engine with 5735 cm³ and 105 PS (77 kW) output.

Only cosmetic changes (an even coarser mesh design on the radiator grille) characterized the models from model years 1982 and 1983. The models also remained unchanged in technical terms. In 1984 there was a new grill with matt black, vertical bars between the twin headlights and new taillights. The station wagon was canceled this year.

For 1985 the grille had been modified one more time. It was also the final rear-wheel drive model year of the LeSabre. A station wagon version was available again, but the 4.1-liter V6 engine was omitted. The LeSabre Limited was also available in a Collector's Edition .

In autumn 1985 a completely new LeSabre model appeared, which was again significantly smaller in its dimensions and provided with front-wheel drive. However, there were only sedans and coupes in this version; the station wagon was built without changes.

The cars were shaped like a wedge and had a wide radiator grille with a coarse mesh design, at both ends of which were inserted rectangular double headlights. The drive for the new front-wheel drive was optionally two V6 engines: the smaller one had a displacement of 2966 cm³ and developed 125 hp (92 kW), the larger was the well-known 3.8-liter V6 engine, now with 150 hp (110 kW). The station wagon was still powered by the 5.05-liter V8 engine. The diesel was canceled due to a lack of customer interest.

Only in the 1986 model year was the LeSabre Grand National as a coupé , which successfully took part in NASCAR races. Only between 112 and 117 copies of the car, always in black with a gray interior, were built, which makes it the most popular LeSabre model today.

In the 1987 model year, the small V6 engine was omitted, and the LeSabre (without additional designation) was reintroduced as the simplest version . The LeSabre T-Type was available as a special model , which - only available as a Coupé - always had a black paintwork and matt black trim. The T-Type also had a leather steering wheel and light alloy wheels. On request, the T-package was also available for the other LeSabre models (with the exception of the station wagon). All LeSabre received broadband instead of the previous double headlights.

There were no changes in the two following years, only the engine output of the only available V6 increased to 165 hp (121 kW) in 1989. From 1988 the LeSabre Standard was only built as a coupé and the LeSabre Custom only as a sedan. The LeSabre Limited was available in both body styles.

In 1990 the T-Type was removed from the range due to poor sales in the previous year, as was the rear-wheel drive station wagon and V8 engine. The remaining Custom and Limited models received a slightly modified front section and rear lights with integrated reversing lights.

In 1991 the model received a new chassis geometry, otherwise Buick's bestseller was not subjected to any further changes.

723,297 of the first LeSabre model with front-wheel drive were built in six years, while 19,700 of the last model of the LeSabre Estate Wagon based on the previous platform were built.

The LeSabre received an aerodynamic revision in the late summer of 1991 for the 1992 model year, so that it looked similar to the Park Avenue . This also increased the length a little while the wheelbase remained the same.

There was only a four-door sedan with the 3.8-liter V6 engine, the output of which had been increased to 170 hp (125 kW). Only the two better equipment variants Custom and Limited were available.

In 1993, ABS became standard on all LeSabre models, and there was a special model for Buick's 90th birthday. Up to and including 1995 there were only minor technical changes.

In autumn 1996, a slight facelift took place for the 1997 model year, during which the indicators moved from the front headlights into the bumpers. There was also a tachometer as standard, but it didn't really fit the broadband speedometer that is still in use. The cars continued to be built in this version until the summer of 1999.

A total of around 1.2 million copies of the second generation LeSabre with front-wheel drive were made in eight years.

For the 2000 model year, the LeSabre received another major overhaul in autumn 1999. The vehicle was now based on GM's G platform . The bonnet was contoured, the oval radiator grille no longer opened with the bonnet, and the rear was made higher. The indicators moved back to the corners of the vehicle next to the broadband headlights.

The last LeSabre was manufactured on June 22, 2005. Its successor was the Buick Lucerne .