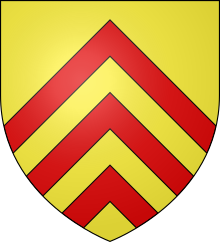 Coat of arms of the de Clare family.

The Clares are an Anglo-Norman noble family who descended from the Dukes of Normandy from the House of the Rollonids and died out in 1314.

Geoffrey de Brionne, Count of Eu , † probably 1015, was a son of Duke Richard I , the great-grandfather of William the Conqueror . Geoffrey's son was Gilbert de Brionne, † 1040, Count of Eu and probably also Count of Brionne , who, however, could not pass his property on to his sons. These, Richard Fitz Gilbert, 1st Lord of Clare , † 1090, and Baudouin , † 1095, went to England with William the Conqueror, later William I , in the course of the Norman Conquest in 1066 .

Richard Fitz Gilbert received large estates in Suffolk and built a castle in the village of Clare , after which his family was named, the ruins of which are still standing today. His great-grandson, Richard de Clare, 2nd Earl of Pembroke , also known as Strongbow , laid the foundation stone for the conquests of England in Ireland with his military operations . Other famous offshoots of this family were Richard de Clare, 6th Lord of Clare and his son Gilbert de Clare, 7th Lord of Clare and 1st Earl of Gloucester , both together took over the leadership of the barons , which King John , also called John Ohneland mocked, forced to sign the Magna Carta in 1215.

Probably the most famous Clare was Gilbert de Clare, 9th Lord of Clare, 6th Earl of Gloucester and 6th Earl of Hertford (1243-1295), one of the leaders of the barons in the early phase of the Barons' Second War against King Henry III . He changed sides in 1265 when he, together with the heir to the throne Lord Edward, helped the king to victory in the Battle of Evesham . But as early as 1267 he returned to the aristocratic opposition, with which he took London , forcing the king to issue the statute of Marlborough , the first chapter of which is still formally valid and thus the oldest piece of statutory law in the United Kingdom.

In 1290 he married Johanna von Akkon , a daughter of King Edward I ; with his son and successor, Gilbert de Clare, 10th Lord of Clare (1291-1314), the Clare family died out in the male line. Piers Gaveston, 1st Earl of Cornwall and Hugh le Despenser the Elder J. , Edward II's favorites, executed in 1312 and 1326 respectively , were married to two sisters of the last earl. The youngest sister, Elizabeth de Clare (around 1291-1360), is the founder of Clare College at the prestigious University of Cambridge .

Until the 3rd Earl of Hertford

The Earls of Hertford and Gloucester