from Wikipedia, the free encyclopedia
This is the spotted version , flagged on May 21, 2020 . There are 2 pending changes that have yet to be viewed.

The following important information is missing from this article or section:
Extend generations textually Christian Giersing there: 20:04, 10 Jun. 2014 (CEST)
Help Wikipedia by researching and pasting it .

The Daihatsu Charade is a passenger car model produced by the Japanese manufacturer Daihatsu since 1977 (export to Europe from 1978) . A special feature of the Charade was that it was positioned exactly between the class of small cars and compact cars. In 2000 the model series was temporarily discontinued, and in 2003 it was finally revived in some markets as a sister model to the Daihatsu Cuore .

The first generation, which was named “Car of the Year” in Japan in 1977, rolled off the assembly line from 1978 to 1983 as a three- and five-door hatchback sedan. A special feature of the three-door was an opera window in the C-pillar, which was otherwise only found in American hard-tops. This was followed by a clearly angular successor.

In 1987 the third generation of the Charade was presented, which was now also available as a four-door notchback sedan. This model is produced by the Xiali brand in China as part of a joint venture . The models that appeared there are still very successful today. So far, three generations of Xiali have been established as a direct sister model, and another only as an optical offshoot.

The Charade GTti, the sportiest offshoot of the series, deserves special attention. With the help of an exhaust gas turbocharger, it generates an output of 74 kW (101 hp) from a three-cylinder 12-valve gasoline engine with a displacement of 993 cm³. Thanks to the low curb weight of 810 kg, an acceleration of 0-100 km / h in 8.1 s is possible. Due to its robustness and simple technology, the Charade GTti has often been used successfully in motorsport.

Another model change took place in 1994. Due to the sharp drop in sales of the Charade, this series was replaced in 1997 by the Daihatsu Sirion . Nevertheless, the hatchback and shortback (notchback) variants of the Charade were offered in parallel with the Sirion until 2000.

In Great Britain and the markets of a few other countries, the Daihatsu Cuore has been sold as Daihatsu Charade since 2003. In 2008, the next generation of Cuore took over in South Africa.

Between May 2011 and January 2013 the Daihatsu Charade was sold again in Germany. Unlike the English model, it is a replica of the second generation Toyota Yaris .

The generations at a glance

The G11 model was slightly larger than its predecessor and adapted to the zeitgeist. The basis remained the 3-cylinder engine with 37 kW (52 PS). The model was available with two doors and four doors. Extensively equipped for this time, for example with a partially foldable backrest, rev counter and warning sound for switched on lights. The vehicle had exhaust gas recirculation and was allowed to drive in smog level 1 in Berlin, for example. There was also a diesel engine with an output of 27 kW. The Daihatsu Charade was one of the cheapest diesels on the market. A 50 kW machine rounded off the offer. With this engine the Charade drove 170 km / h.

The Charade was also available as a special model in Europe as the 101 PS GTti Sport. 2500 units of this model were delivered so that homologation for rally sport was possible. With a liter output of over 100 hp / l, the Charade GTti Sport was the record holder for series vehicles in this area at the time. 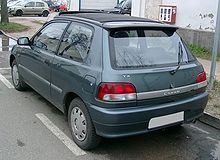