Dankmarshausen is a district of the city of Werra-Suhl-Tal in the Wartburg district in Thuringia .

Dankmarshausen is a heaped village . The place is located about six kilometers southwest of Gerstungen and extends on the left, western high bank of the Werra . In terms of natural space, Dankmarshausen lies in the Berka-Gerstung basin , with a small sub -basin , the Obersuhler basin and the Kleinenseer Bucht. The wide basin is surrounded by mountain ranges: in the southwest by the Seulingswald , in the south by the foothills of the Vorder Rhön , in the east by the foothills of the Thuringian Forest and in the north by the Richelsdorf Mountains , also known as Waldhessen .

The place borders in the south on the Hessian city Heringen with the district Widdershausen , it follows in the west the district Kleinensee . In the west, a corridor only 600 m wide leads to the neighboring town of Großensee in Thuringia . To the north, the Hessian districts of Bosserode and Obersuhl join the community of Wildeck . Berka / Werra and Dippach , districts of the city of Werra-Suhl-Tal follow in the east.

Dankmarshausen lies on the left bank of the Werra; In the floodplain, two quarry ponds were created to the right of the Werra through continued gravel mining. In the north of the district, the nature reserve Dankmarshäuser Rhäden extends in the direction of Obersuhl , a damp lowland that is irrigated and drained by the Rhedengraben and the connecting ditches. A second system of drainage ditches is known as the Kleiner Graben . It was created to drain the Werraaue between Dippach, Widdershausen and Dankmarshausen and flows into the Werra northeast of the village.

From a geological point of view, the place lies in the Trias geological formation . There are considerable potash deposits in the Werra potash district underground . Above ground, high-quality gravel and clay deposits were and are being mined in numerous places in the district.

Dankmarshausen was strategically located at a Werra crossing on the Altstraße Kurz Hessen and in the High and Late Middle Ages was part of the rulership of the Fulda Imperial Abbey in the Gerstungen district . To protect their possessions in the Werra left the Fulda abbots in the Stauferzeit the Burg Hornberg built. A Hinricus de Hornesberc was mentioned in 1214 as a fuldischer feudal man . As a pledge of the abbey, which was in financial distress, the castle came under imperial administration in 1294 when King Adolf von Nassau began his campaign in Thuringia. After the king's death (1298), the castle was redeemed by Fulda again, but it is said to have been abandoned as early as the 14th century. Around 1300 a knight, Bertold von Creuzburg, became a fiefdom of Fuld.

In 1302, the documentary first mention of Dankmarshausen made: ... our marriage vnd Vischerie ZCU Dangmerßhusen located Genand where Slage ... .
Today's place developed from the upper village with the parish church of St. Kilian on the high bank of the Werra. The Mühlrain and Herrenstrasse (named after the manor complex next to the original Werra bridge that characterize the townscape) lead to the lower village . The settlement expansions to the north and west of the historic town center were created in the course of industrialization and potash mining.

Thanks to a sales contract sealed in 1402, "Dankmershußen" was permanently given to the Landgraviate of Thuringia . The listed bower in the Schlossgasse was a seat of the local nobility that has been preserved to this day. Further manors were located in the lower village and secured the Werra crossing. The manorial chamber property was bought by the community in 1818. The following are mentioned as local nobility:

In the western part of the district, finds and a fountain are reminiscent of the former small settlements of Marbach and Spielerode, which were devastated by the agricultural crisis in the late Middle Ages . A stone cross was also mentioned near a former pilgrimage chapel in the corridor "Bei den Drei Linden".

The tower of the Gothic parish church of Dankmarshausen has an inscription plaque with the construction date of 1440. The church, like large parts of the village, was destroyed by a major fire in 1723. The reconstruction of the church was initially completed in 1731 (the renewed nave, choir and tower were retained), and in 1878 the interior was extensively restored. The church was originally subordinate to the Heringen deanery.

In 1733, the Hausbreitenbach exchange comparison between Saxony-Eisenach and Hessen-Kassel was concluded, on this basis the state borders were petrified in various sections, the border also runs right through the Hornsberg castle ruins.

As a joint task, with the participation of the neighboring Hessian towns, the 220 hectare swampy lowland "Der Rheden" was drained from 1859 with the construction of drainage ditches, the Dankmarshäuser received a share of 139 hectares. Renaturation began as early as the 1960s , since the agricultural management of the GDR share was omitted.

In 1879, based on the census of 1875, statistic data standardized across the country were published for the first time, also for the village of Dankmarshausen. Dankmarshausen had 188 houses with 863 inhabitants that year. The size of the field was 1112.09 hectares of which farms and gardens 18.1 hectares, meadows 275.4 hectares, arable land 591.9 hectares. Forest 149.1 hectares, ponds, streams and rivers 21.4 hectares, on paths, drifts , Wasteland and orchards accounted for 56.1 ha. The livestock: Dankmarshausen had 25 horses, 578 cattle, 570 sheep, 141 pigs, 32 goats and 25 bee colonies.

During gravel mining on the Werraufer (site at the Finkenliede), archaeological finds were often made before the Second World War, which were examined in more detail in the winter of 1942 by the local researcher Arno Volland (1888–1968) from Gerstung. 17 graves, 15 of which were cremation graves, were found and some were recovered. In this context, there is a settlement in the Flur Am Weidigsrain, which was also discovered in 1939 through gravel quarrying, and which the teacher Dr. R. Salzmann was localized and evaluated. The analysis of both sites showed that they belong to the Hallstatt B - LA period. The finds are part of the exhibition at the Werra Valley Museum.

The construction of the rail network in the 19th century and the settlement of a potash shaft brought job opportunities for the rural population and improved transport connections. After the Second World War, Dankmarshausen was in the immediate border area of ​​the inner-German border , and the diverse relationships with neighboring Hessian towns were cut off after 1961. Residents who were perceived as suspicious by the State Security were forcibly resettled. After reunification in 1990, many companies closed and the population steadily decreased due to emigration.

As part of the Thuringia regional reform in 2018 and 2019 , the municipalities of Großensee, Dankmarshausen, Dippach and Berka / Werra agreed to submit an application to the Free State of Thuringia for a merger to form the city of Werra-Suhl-Tal on January 1, 2019, and the Berka / Werra administrative community dissolve. The Thuringian state government included the project in the second law for the voluntary reorganization of municipalities belonging to the district, which was passed by the Thuringian state parliament on December 13, 2018 and came into force at the turn of the year 2018/19.

The council from Dankmarshausen last consisted of 12 councilors and councilors.

At the end of September there is a fair in Dankmarshausen. 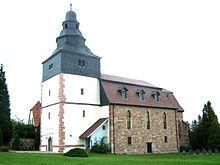 Numerous buildings attest to the eventful history of the place. The Hornsberg Castle from the Hohenstaufen era , located about three kilometers southwest of the village of Dankmarshausen on the summit of the Hornungskuppe, left hardly any traces . Right next to today's Werra bridge are the remains of the bridge that was blown up in World War II . Dankmarshausen is said to have had the first bridge built entirely of wood as early as 1500. The St. Kilian Church is the building that characterizes the townscape and the center of the historical location, adjacent to it is the rectory, a striking half-timbered building with an old fountain. To the north of the church one encounters the anger and a castle-like farmstead - this noble residence with a stone bower is said to date from the 16th century. The lovingly furnished bakery is surrounded by numerous restored half-timbered houses from the 18th century. Close to the bridge is a strikingly large four-sided courtyard - the former estate, now privately owned. The former Werra mill was adjacent to the Werra, only one millstone remained.

To the south of the historical location one encounters the tracks with the train station and the former colliery as well as a number of residential and commercial buildings from around 1900. After the reunification , the place developed on the eastern edge with a small industrial area on the Finkenliete and with housing estate on the vineyard.

Memorial plaque at the cemetery (2008)

A plaque in the cemetery commemorates the 28 victims from several countries (including two children) who had to do forced labor on the grounds of the Alexandershall mine belonging to Wintershall AG . Over 1,000 men and women were deployed underground for construction, loading and transport work.

The war memorial was erected on a forecourt next to the church, it is a simple four-sided obelisk with the names of the fallen soldiers of the two world wars. Another memorial stone in front of the Heimatstube commemorates the first mention of the place in 1302.

After the First World War , the construction of a potash shaft on the outskirts had failed due to technical problems. The economic development of the place was significantly hampered after 1945 by the peripheral location on the inner-German border. The settlement of new industrial companies was prevented by the division of Germany . The mining of gravel and building materials is currently still the most important economic basis. The majority of the working population commute to work in the surrounding communities.

The infrastructure, in particular the transport network, was tailored to the needs of the potash industry, for this purpose there is a track network (still in operation) to the active mine facilities at Herfa-Neurode.

Junction 35 (Wildeck-Obersuhl) of the A4 is in Obersuhl, three kilometers away. Dankmarshausen is connected to the neighboring towns of Großensee and Dippach via the country road 2117, to Widdershausen the Hessian district road K 3 leads from the state border directly on the outskirts of Dankmarshausen.

The Thuringian Railway Eisenach – Bebra with the nearby stops in Obersuhl, Bosserode and Gerstungen runs north of the district . This railway line was extended at the beginning of the 20th century in the Bebra – Gerstungen section to include numerous siding for the potash shafts in the Werra valley. Dankmarshausen also got a rail connection on the Gerstungen – Vacha railway line , and after the end of the war the railway line between Philippsthal and Vacha was dismantled . Passenger traffic in Dankmarshausen was maintained until 1952, since then only freight trains for the potash industry have been running. Today, the entire transport of potash for the Werra potash district is carried out via the railway .

The regional bus company Katzmann-Reisen has its headquarters in Dankmarshausen.