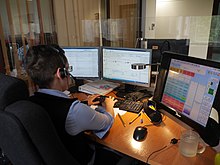 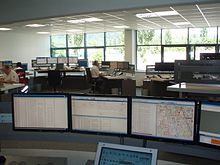 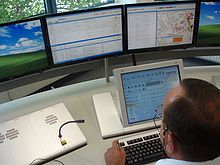 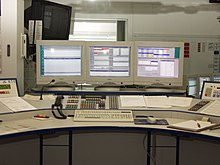 Workplace in a control center 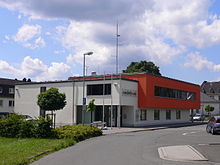 Central control center of the Lahn-Dill district in Wetzlar

Answer emergency calls and use the rescue service , fire brigade , technical relief organization , police and other emergency services. As a rule, they can be reached around the clock and are in contact with each other by telephone, radio and sometimes data lines. Throughout Europe, a contact person can be reached on the emergency number 112 who can provide help in the areas mentioned.

There are numerous services that operate a control center as a central contact. The names and abbreviations are from Germany, similar or adapted names are also used in other countries:

In the field of non-police security, a development towards larger and larger control centers can be seen for reasons of cost (personnel costs, technology costs). In a first step, fire brigade control centers and rescue control centers were merged into so-called "integrated fire and rescue control centers" (ILS) in many places. The next step is - v. a. in Northern and Eastern Germany - the formation of so-called "Integrated Regional Control Centers" (IRLS), which are not only responsible for the fire brigade, rescue service and disaster control in a district or an independent city, but also take on these tasks for several regional authorities. The IRLS West in Elmshorn went into operation as the first IRLS in Germany in 2001, which from then on directed all operations of the non-police BOS in the three districts of Pinneberg, Steinburg and Dithmarschen. This development is completed by the formation of so-called “Cooperative Regional Control Centers” (KRLS), in which the police are accommodated in addition to the non-police hazard prevention. In contrast to some parts of the Anglo-Saxon region, however, there is no mixing of police and non-police tasks in these control centers. Both danger prevention areas use one building and the same highly specialized control center technology, but police officers only answer the emergency number 110 and municipal operations officers only answer the emergency number 112 and process them strictly separately for their respective areas of responsibility. One of the first control centers of this type is the Cooperative Regional Control Center (KRLS) North in Harrislee near Flensburg, which started operations on September 4, 2009. The KRLS West in Elmshorn followed on April 20, 2010.

In Lower Saxony there are five cooperative regional control centers with locations in Oldenburg, Osnabrück, Wittmund, Hameln and Lüneburg. The Hameln control center (“Cooperative Regional Control Center Weserbergland”) went into operation in April 2008, making it the first of its kind in Germany.

However, in some rural areas without a permanently manned fire brigade control center, the fire brigade is alerted via the police operations centers (PEZ).

The authorities have set up control centers that can also be linked internationally. They are activated as contact persons for various organizations, especially in the event of large-scale disasters.

In Austria there are in the Interior Ministry , the Federal Alarm Center and in all federal states each have a state warning center of the provincial governments. In the state warning centers, for example, all automatically recorded measured values ​​from the environmental probes or flood levels converge and trigger the corresponding alarms when the corresponding levels are reached.

Other organizations with supraregional or public significance and their own task forces also have operational control centers, e.g. B .:

The individual control centers can have clearly separated or overarching areas of responsibility, both organizationally and locally.

In Germany they usually cover the area of ​​a larger city or one or more rural districts.

In Austria, district alarm and warning centers, area alarm centers or state warning centers at district or state level are also common for fire brigades . In the Austrian rescue service , the organizations involved (e.g. Red Cross , Samaritan Association, etc.) are often coordinated by the organization's own control centers. In Lower Austria , a separate company, 144 Notruf Niederösterreich (formerly LEBIG), was founded in 2003 , which coordinates the various rescue services for the entire state from four different locations and at the same time supports the patients or the helpers by telephone until the first operational resource arrives on site.

The operation of the control centers of the authorities and organizations with security tasks is regulated differently by law or ordinance.

Authorized control centers ( police , professional fire brigade ), operation by the responsible district or city or a special purpose association, or by an aid organization commissioned with the operation come into question.

The employees at control centers are called dispatchers or operations clerks (sometimes also called operations workers for short ). Depending on the legal relationship, they are employees or civil servants of the control center operator. In most control centers at least two dispatchers are on duty, in larger organizational units (large cities and regions) there are as many as 20 at the same time. The staffing is measured according to the expected workload, so that the number of dispatchers can be significantly higher depending on the area of ​​responsibility and the workload. The control center of the Berlin fire brigade , for example, has 45 workstations.

Depending on the internal organization, a dispatcher takes on the processing of a complete order from the emergency call to the end of the mission, or the tasks involved are divided among several dispatchers ( telephone operator , radio operator ).

The dispatchers in the control center usually have the training in their area that is also necessary for the emergency personnel on site, often also management training. They also have special additional training for work in the control center. You must be familiar with the area and have good knowledge of the possible uses of your own and neighboring organizations.

Operations clerk at the central control centers and radio stations in Hessen z. B. must be paramedics or emergency paramedics, as well as group leaders of the fire brigade, before they complete a five-week course for emergency officers at the Hessian state fire brigade school in Kassel.

The team at a control center must constantly keep track of, in some cases, several simultaneous operations and coordinate with each other. Therefore, in addition to specialist knowledge, teamwork , communication skills and stress resistance are required.

Further positions in a control center are:

The dispatchers are usually supported in their work by a computer- aided control center system ( operations control computer ). This system ensures the archiving of deployment data, makes alarm suggestions, provides road / location maps and deployment plans, ensures that units are automatically alerted at the touch of a button, transfers deployment data, connects the various workplaces or even different control centers with each other and helps with statistical evaluations and Settlements. These systems are often duplicated for security reasons.

The extension of the voice radio by a radio reporting system facilitates the work by relieving the radio traffic and the direct connection to the operations control computer (automatic documentation of departure and arrival times, display of free and occupied vehicles, partly also geodata of the operational resources).