Emil Steinberger (born January 6, 1933 in Lucerne ; entitled to live there ) is a Swiss cabaret artist , writer , director and actor who has been known to a wide audience in Germany, Austria and Switzerland as Emil since the 1970s thanks to his TV skits .

Emil Steinberger is the son of the accountant Rudolf Steinberger and his wife Creszentia, b. Horat. As a boy he was already improvising skits. After training as a post office clerk and nine years of counter service, he attended the Lucerne School of Design (now Lucerne School of Design and Art ) for five years from 1960 and became a qualified graphic artist . Even then he played in the cabaret "Cabaradiesli". In 1966 he married Maya Rudin; Son Philipp was born in 1969. In September 1967 they opened together the small theater on Bundesplatz , today the small theater in Lucerne , in which jazz concerts, theater and cabaret performances took place and where he performed his first own programs. For a few years he also ran the Kino modern in Lucerne, which existed under the same name, and in 1973 he set up a studio cinema with 150 seats himself, the studio cinema , which was closed in 2008 .

At the beginning of the 1970s, Steinberger filled all theaters in Switzerland and soon in Germany with his solo programs “Stories That Life wrote”, “E for Emil” and “Emil Träum”. The Emil recordings broadcast by ARD contributed to its popularity in Germany. Various tours through Germany and Switzerland followed, and he also performed several times in the GDR .

In 1977 he stood in the circus Knie ring for nine months .

Another milestone in his career was one of the two leading roles in the film Die Schweizermacher , directed by Rolf Lyssy .

In 1980 he was the financial obstetrician and director at the restart of Circus Roncalli in Cologne. In the same year his second son Martin was born. His stage program Feuerabend , which he began in 1980, was so successful that he decided to be just Emil .

In French-speaking Switzerland in the 1980s, he also played his numbers in French in the programs "Une heure avec Emil" and "Feu et flamme". In the 1986 sports film Feuer und Eis , produced by Willy Bogner , he took on the role of narrator in the German-language dubbing . In 1987 he appeared for the last time as Emil and thus temporarily ended his stage career.

In 1989 his marriage to Maya was divorced.

From 1990 to 1991 Emil Steinberger was part of the advice team in Yes or No , a What am I? -Remake with Joachim Fuchsberger . At the same time he was successful in advertising. Among other things, he wrote and staged 100 commercials for Melitta coffee, with which Melitta man Egon Wellenbrink became famous. He also wrote and directed commercials for Fisherman's Friend and Bico Mattresses. During this time he staged a major advertising tour for “Switzerland Tourism” under the title “Switzerland Plus” and toured Germany with a troupe. In 2008 Steinberger was again active as a recruiter by writing and playing ten TV commercials for Rivella International. 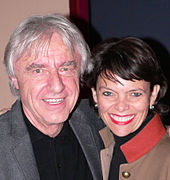 In 1999 his first book "True Lies Stories" was published. In 2000 he and his wife Niccel founded their own publishing house, Edition E, in which in 2001 his second book "Emil via New York" appeared. In this publishing house the Steinbergers publish their books as well as CDs and DVDs with Emil's earlier programs. In 2013 Edition E entered into a cooperation with Oltner Knapp Verlag. Since 1999 he has been on the road with readings that developed into a new stage program, “Three Angels!”. He performed more than 850 times with this program. From 2015 to the end of 2017 he toured with the program “Emil - no einisch” (“Emil - once again”), which he played in Swiss German, German with local Swiss flavor and French and in which many successful numbers from his programs of the 1960s through 1980s are included. In November 2017, a recording of this program for Swiss radio and television was made in the Gloria Theater in Bad Säckingen and broadcast on SRF 1 on January 6, 2018 on the occasion of his 85th birthday .

In between he was also a speaker in children's radio plays (e.g. in Michel vo der Schwand (Michel from Lönneberga) by Astrid Lindgren ). He also acted as a spokesperson for Hans Fischer 's children's story Pitschi . On behalf of the Diogenes publishing house , he also read Hugo Loetscher's “The Wash Kitchen Key ” for an audio book production .

In 2006 Emil and Niccel Steinberger exhibited their jointly drawn “Wochenblätter” for the first time in the Haus der Kunst St. Josef in Solothurn. Exhibitions followed in Göttingen, Stuttgart, Lauchheim, Lucerne, Montreux and other places.

On his 75th birthday in 2008, he was made an honorary citizen by the city of Lucerne . In 2013, on the occasion of Steinberger's 80th birthday, Knapp-Verlag published the latest book “Lachtzig” in the Perlen series.

Emil Steinberger lived in Montreux for 15 years , and since 2014 he has been living in Basel with his wife Niccel, who offers salmon seminars at irregular intervals .

Emil Steinberger with his Star of Satire (2009) 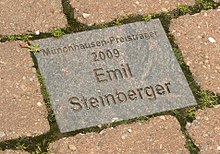