The area is a measure of the size of an area . A surface is understood to mean two-dimensional structures, i.e. those in which one can move in two independent directions. This includes the usual figures of flat geometry such as rectangles , polygons , circles , but also boundary surfaces of three-dimensional bodies such as cuboids , spheres , cylinders , etc. These surfaces are sufficient for many applications, more complex surfaces can often be composed of them or approximated by them .

The surface area plays an important role in mathematics, when defining many physical quantities, but also in everyday life. For example, pressure is defined as the force per area, or the magnetic moment of a conductor loop as the current times the area around it . Property and apartment sizes can be compared by specifying their area. Material consumption, for example of seeds for a field or paint for painting an area, can be estimated with the aid of the area.

The area is normalized in the sense that the unit square , that is, the square with side length 1, has the area 1; Expressed in units of measurement , a square with a side length of 1 m has an  area of ​​1  m 2 . In order to make surfaces comparable in terms of their area, one must demand that congruent areas have the same area and that the area of ​​combined areas is the sum of the contents of the partial areas.

The off measurement of surface areas does not happen right in the rule. Instead, certain lengths are measured, from which the area is then calculated. To measure the area of ​​a rectangle or a spherical surface, one usually measures the length of the sides of the rectangle or the diameter of the sphere and obtains the desired area by means of geometric formulas as listed below.

Area of ​​some geometric figures 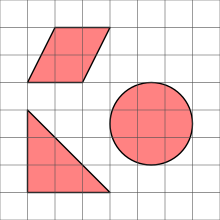 Three well-known figures from plane geometry on a checkered background

The following table lists some well-known figures from planar geometry together with formulas for calculating their area.

The following applies to the indices: with is and with is meant. The sum is positive if the corner points are passed through according to the direction of rotation of the coordinate system . The amount may have to be selected in the event of negative results . Pick's theorem can be used especially for polygonal surfaces with grid points as corners . Other areas can usually be easily approximated using polygons , so that an approximate value can easily be obtained.

Calculation of some surfaces 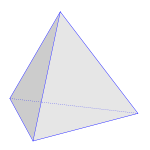 Here are some typical formulas for calculating surfaces:

A typical procedure for determining such surfaces is the so-called "rolling" or "unwinding" in the plane, that is, one tries to map the surface in the plane in such a way that the surface area is retained and then determines the area of ​​the resulting planes Figure. However, this does not work with all surfaces, as the example of the sphere shows. To determine such surfaces methods of analysis used in the example of the ball can be about rotation surfaces use. Often Guldin's first rule also leads to rapid success, for example with the torus. 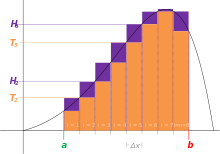 The integral calculus was developed, among other things, to determine areas under curves, i.e. under function graphs. The idea is to approximate the area between the curve and axis by a series of narrow rectangles and then let the width of these rectangles approach 0 in a boundary process. The convergence of this limit depends on the curve used. If one looks at a restricted area, for example the curve over a restricted interval as in the adjacent drawing, theorems of analysis show that the continuity of the curve is sufficient to ensure the convergence of the limit process. The phenomenon occurs that areas below the axis become negative, which can be undesirable when determining areas. If you want to avoid this, you have to go over to the amount of the function.

If you want to the interval boundaries and permit, we first determined the areas for finite limits and as just described and then leaves in a further boundary process , or seek both. Here it can happen that this limit process does not converge, for example with oscillating functions such as the sine function . If you limit yourself to functions that have their function graphs in the upper half-plane, these oscillation effects can no longer occur, but it can happen that the area between the curve and the axis becomes infinite. Since the total area has an infinite extent, this is even a plausible and ultimately also expected result. However, if the curve approaches the -axis sufficiently quickly for points far from 0 , the phenomenon can occur that an infinitely extended area also has a finite area. A well-known example that is important for probability theory is the area between the Gaussian bell curve

When trying to calculate further areas, for example also under discontinuous curves, one finally comes up with the question of which quantities in the plane should a meaningful area be allocated at all. This question proves difficult, as pointed out in the article on the dimension problem . It turns out that the intuitive concept of area used here cannot meaningfully be extended to all subsets of the plane.

In differential geometry , the area of ​​a flat or curved surface is calculated using the coordinates as an area integral:

The area element corresponds to the width of the interval in the one-dimensional integral calculus . There is the area of the by the tangents to the coordinate lines spanned parallelogram with sides and on. The surface element depends on the coordinate system and the Gaussian curvature of the surface.

The area element is in Cartesian coordinates . On the spherical surface with the radius and the length as well as the width as coordinate parameters apply . For the surface of a sphere ( ) one obtains the area:

To calculate the area element, it is not absolutely necessary to know the position of a spatial area in space. The surface element can only be derived from such dimensions that can be measured within the surface, and thus counts to the inner geometry of the surface. This is also the reason why the surface area of ​​a (developable) surface does not change when it is developed and can therefore be determined by developing into a plane.

Naturally, surfaces also appear as a quantity to be measured in physics. Areas are usually measured indirectly using the above formulas. Typical sizes at which surfaces occur are:

Area as a vector

Often the surface is also assigned a direction that is perpendicular to the surface, which makes the surface a vector and gives it an orientation because of the two possible choices of the perpendicular direction . The length of the vector is a measure of the area. In the case of a parallelogram bounded by vectors and , this is the vector product

If there are surfaces, the normal vector field is usually used in order to be able to assign a direction to them locally at each point. This leads to flux quantities that are defined as the scalar product of the vector field and the area (as a vector). The current is calculated from the current density according to

where in the integral the scalar product

is formed. For evaluating such integrals, formulas for calculating surfaces are helpful.

In physics, there are also area sizes that are actually determined experimentally, such as scattering cross-sections . This is based on the idea that a particle flow hits a solid target object, the so-called target, and the particles of the particle flow hit the particles of the target with a certain probability. The macroscopically measured scattering behavior then allows conclusions to be drawn about the cross-sectional areas that the target particles hold against the flow particles. The size determined in this way has the dimension of an area. Since the scattering behavior depends not only on geometric parameters, but also on other interactions between the scattering partners, the measured area cannot always be directly equated with the geometric cross-section of the scattering partners. One then speaks more generally of the cross-section , which also has the dimension of an area.

As a rule, the area of ​​land, parts of land, countries or other areas cannot be determined using the formulas for simple geometric figures. Such areas can be calculated graphically, semi-graphically, from field dimensions or from coordinates.

A mapping of the area must be available for the graphic process. Areas whose boundaries are formed by a polygon can be broken down into triangles or trapezoids, whose base lines and heights are measured. The area of ​​the partial areas and finally the area of ​​the total area are then calculated from these measurements. The semi-graphic area calculation is used when the area can be broken down into narrow triangles, the short base side of which has been precisely measured in the field. Since the relative error of the area is mainly determined by the relative error of the short base side, measuring the base side in the field instead of in the map increases the accuracy of the area compared to the purely graphic method.

Irregular surfaces can be recorded with the help of a square glass panel. On the underside, this has a grid of squares whose side length is known (e.g. 1 millimeter). The board is placed on the mapped area and the area is determined by counting the squares that lie within the area.

A planimeter harp can be used for elongated surfaces. This consists of a sheet of paper with parallel lines whose uniform spacing is known. The planimeter harp is placed on the surface in such a way that the lines are approximately perpendicular to the longitudinal direction of the surface. This divides the area into trapezoids, the center lines of which are added with a pair of dividers. The area can be calculated from the sum of the lengths of the center lines and the line spacing.

Polar planimeter, on the right the driving pen with magnifying glass, on the left the roller with counter, on top the pole fixed during the measurement

The planimeter , a mechanical integration instrument , is particularly suitable for determining the surface area of areas with a curvilinear boundary . The limit must be traversed with the driving pen of the planimeter. When driving around the area, a roller rotates and the rotation of the roller and the size of the area can be read on a mechanical or electronic counter. The accuracy depends on how precisely the operator travels the edge of the area with the driving pen. The smaller the circumference in relation to the area, the more precise the result.

Today areas are often calculated from coordinates. This can be, for example, the coordinates of boundary points in the real estate cadastre or corner points of an area in a geographic information system . Often the corner points are connected by straight lines, occasionally also by arcs. Therefore, the area can be calculated using the Gaussian trapezoidal formula. In the case of circular arcs, the circular segments between the polygon side and the circular arc must be taken into account. If the content of an irregular area is to be determined in a geographic information system, the area can be approximated by a polygon with short side lengths.