The frog-spoon plants (Alismataceae) are a family in the order of the frog-spoon-like (Alismatales) within the flowering plants (Magnoliopsida). Up to 100 species thrive in wet locations or in water.

The representatives of the frog-spoon family are rarely annual or usually perennial herbaceous marsh or water plants. They sometimes form rhizomes with endodermis and sometimes stolons . The plants contain milky sap . Plant parts are hairless or covered with simple, single-celled to star-shaped trichomes .

The stems are not chlorophyll-containing , short, upright and cormus-like . They branch sympodially . Remnants of the vascular bundles of withered petioles are often found along the stems. Often rhizomes are formed that occasionally end in tubers . The roots are located at the base of the stems or on the lower nodes .

The leaves float on the water or stand upright submerged. They are basal, sessile or stalked and stand in two rows, spiral-like in two rows, spiral-shaped or often in basal rosettes. The leaf stalks have a round to triangular cross section and have a leaf sheath without auricles at the base. The leaf blade is linear, lanceolate, egg-shaped or rhombic and may have translucent points or lines. The leaf margin is whole or wavy, the tip blunt, pointed or pointed or cut off in another shape. The base of the leaf blade is either tapered without a lobes or provided with cut lobes, arrow-shaped or spear-shaped. The vein consists of parallel main veins and reticulated secondary veins.

The over a inflorescence stem mostly upright or rarely floating inflorescences are traubig or quirlförmige branching panicle , rarely they are also doldig . They contain lively arranged bracts that are linear, with entire margins and blunt to pointed towards the front.

The radial symmetrical flowers are threefold with a double flower envelope . The three green and durable sepals enclose the blossom and fruit or are spread out or bent back. The three white to pink, or sometimes yellowish, petals are delicate and are shed early. The nectar production may at the base of the petals to stamens or staminodes done.

There are one or two circles with three or more free stamens each, which are formed centrifugally or centripetally. The outer stamens can be reduced to staminodes. The stamens are relatively long. The dust bags fixed to the base or free-standing are turned outwards and open through longitudinal slits. The pollen grains are mostly pantoporate and prickly. There are three six to many free or deformed at its base carpels formed which are spirally arranged or irregularly in a circle. Each carpel contains one (rarely two) anatropic ovules located at the base , only in the genus Damasonium two or more ovules with marginal placentation are formed. The terminal or sideways stylus ends in a linear scar .

The fruits standing together in groups or a circle are mostly nuts (achenes), rarely stone fruits or follicles that contain one to a few seeds . The fruit peel often has glandular hairs. The U-shaped seeds have a horseshoe-shaped embryo and, when mature, no endosperm .

Distribution map of the Alismataceae family 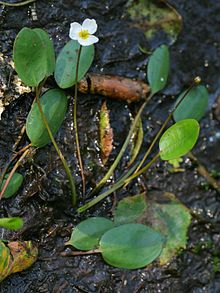 The Alismataceae family was established in 1799 by Étienne Pierre Ventenat in Tableau du Regne Vegetal , 2, p. 157. The type genus is Alisma L. The genera of the formerly independent family Damasoniaceae Nakai and water poppy plants (Limnocharitaceae Takht. Ex Cronquist ) are now assigned to the Alismataceae according to APG III.

The Alismataceae family is distributed almost worldwide, but especially in the northern hemisphere , mainly in tropical and subtropical areas.